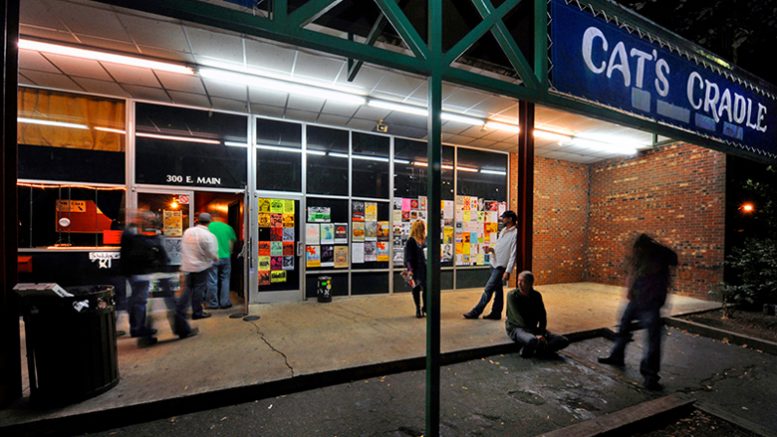 A half century ago, humans first set foot on the moon, hundreds of thousands of young people gathered in New York’s Catskill Mountains for a music festival that became a cultural milestone, and the war in Vietnam dragged on while protest and resistance grew. It was the year that Sesame Street premiered on Public TV, British troops were first sent into Northern Ireland, and Richard Nixon became the 37th President of the United States.

It was also the year that the Cat’s Cradle opened its doors, and gave music a place to live and be live in the Triangle. First in Chapel Hill, now in Carrboro, bands will tell you that between D.C. and Atlanta there is no better club than the Cat’s Cradle.

But it’s almost impossible to believe that it’s been 50 years. Having hosted bands as diverse as Nirvana, Public Enemy, John Mayer, Joan Baez, and Iggy Pop, the Cat’s Cradle has become a must-stop venue for premier music acts over the past several decades. With a capacity of 750 people, the Cat’s Cradle allows concert-goers a chance to see established and up-and-coming bands alike in an intimate setting.

It’s become more than just a club: it’s an icon.

In fact, during recent government meetings, both the town of Chapel Hill and the town of Carrboro issued proclamations of thanks, reminding residents and visitors that these communities are proud and honored to proclaim 2019 the Year of the Cradle. Frank Heath, who bought Cat’s Cradle in 1984, expressed thanks to both towns for the proclamation.

“Thanks to you,” he said to the board, “and all the bands, as well as the people who ran the Cradle before I did. They were the ones who made it a place to be taken over and run successfully.”

Marsha Fitch Wilson started Cat’s Cradle in 1969 by holding pop-up concerts in the Pickwick Theatre Building in Chapel Hill. The Cradle didn’t have a permanent location until a few years later, when it moved to the space now occupied by Mediterranean Deli. After being evicted over noise complaints – and what kind of music club would they be if they hadn’t been? – the music venue bounced from one location to another before settling down in the 300 building on East Main Street in Carrboro.

But without Frank Heath, the Cradle’s continued existence would have been in doubt. Bill Smith, world-famous chef and local music aficionado says of him: “Frank Heath doesn’t say much, so it would be easy to understand if people here didn’t realize what a debt we owe him as the Cat’s Cradle celebrates its fiftieth anniversary. No club lasts that long. He can claim a lot of the credit for the fact that this area is world famous for its music culture and for the respect and admiration that that recognition has brought us.”

Even Consequence of Sound made Cat’s Cradle No. 12 on their list of top 100 live music venues in the United States.

“It’s my favorite type of venue,” Justin Gerber of Consequence of Sound wrote. “A place where the audience and the performer join up as one to create a memorable experience for all involved, something that gets lost in arenas and stadiums.”

Long before Gerber’s praise, however, Thurston Moore name-checked the venue on Sonic Youth’s pummeling Dirty cut, “Chapel Hill,” as he sang: “Throw me a cord and plug it in/get the Cradle rocking.” For decades, the venue has allowed artists to do just that with a sound system that consistently garners rave reviews. Fans who saw Swan’s 2015 show, for example, were impressed by the venue’s ability to accommodate the experimental rockers’ massive, mighty sound.

Fifty years later, 1969 is still arguably the most historic year in modern American history. It was a year of triumphs and tragedies, and for this North Carolina college town area it was the year that live music would forever shape the trajectory of the town. Celebrate with the Cradle

As 2019 comes to a close, the venue is planning a December bash for its 50thbirthday.

The 40+plus band lineup for these nights is so CRAZY GOOD that they have announced just a few bands each day — but so far the list of performers includes:

For more about this celebration visit Cat’s Cradle website.