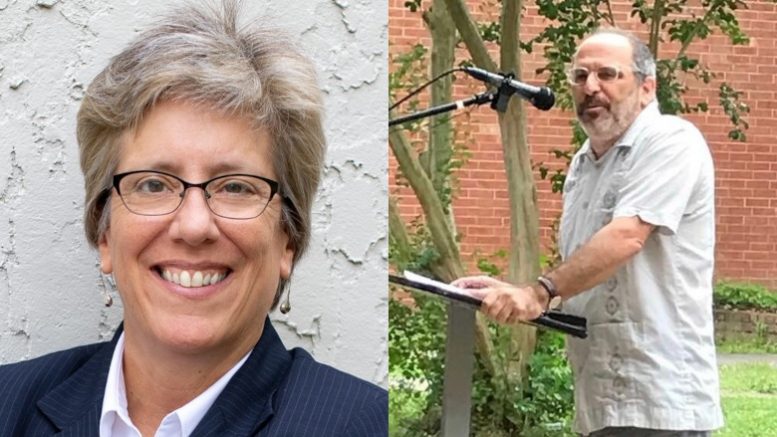 Within a week of one another, two local elected officials announced their departure from office. Lydia Lavelle, Carrboro’s mayor since 2013, said on May 26 she would not seek re-election when her term ends in early December. The following Wednesday, Mark Dorosin, Orange County commissioner since 2012, posted on Facebook that he had taken a teaching position in Florida and would be vacating his seat on the board of commissioners at the end of July.

A few months earlier, David Andrews, Carrboro’s town manager since 2012, announced he would retire in July. Before she leaves office, Lavelle will lead Carrboro’s town council in selecting his successor.

Lavelle’s career in politics began in 2007 when she was elected to Carrboro’s Board of Aldermen (now town council). As mayor, she has led Carrboro through the HB2 debacle. Carrboro was the first town to take a stand against what gained national attention as “the bathroom bill,” which required people to use gender-segregated public restrooms that aligned with the gender on their birth certificates.

While Lavelle said she won’t miss “the intense pressure created by the COVID-19 pandemic,” she will miss interacting with constituents.

“I have frequently said that I love local government because it is the government closest to the people,” she said. “In that spirit, I will miss the in-person connections that I have had as mayor with those that I serve.”

A professor at N.C. Central University’s School of Law, Lavelle also was the school’s assistant dean of student affairs for a decade and is a past president of the N.C. Association of Women Attorneys. She will continue to teach at the law school after she leaves office.

Dorosin is a Carrboro Board of Aldermen alumnus, having served on that board from 1999 to 2003. His tenure on the board of commissioners includes chairing the board from 2016 to 2018. A civil rights lawyer, he was co-director of UNC’s Center for Civil Rights until the UNC System Board of Governors in 2017 banned it from litigating, effectively ending the law clinic’s work. He currently is managing attorney for the North Carolina regional office of the nonprofit Lawyers’ Committee for Civil Rights Under Law. He will teach law at Florida A&M College of Law, a historically black college.

Dorosin did not respond to a request for comment.

Because Dorosin is stepping down less than a year into his four-year term, the county commissioners will name someone to fill his vacant seat within 60 days after he leaves office. This is the first time since 1981 that the commissioners have had to fill a vacancy. The new appointee will hold the seat only until the next county election, in 2022, when voters will decide who fill the seat. If the commissioners do not appoint someone by Sept. 29, the clerk of the N.C. Supreme Court will name Dorosin’s successor.

In 2019, former county commissioner Penny Rich lost her re-election bid to Dorosin by fewer than a dozen votes. She issued a statement on June 4 that she “will remain open minded about the prospect of submitting my name forward for appointment.” In her statement, she said, “many residents of Orange County have reached out to me … encouraging me to consider putting my name forward to fill the vacancy … .”

In Carrboro, town council member Damon Seils has announced that he will run for mayor. Because his term goes through 2023, he would retain his seat on council if he lost the race for mayor.