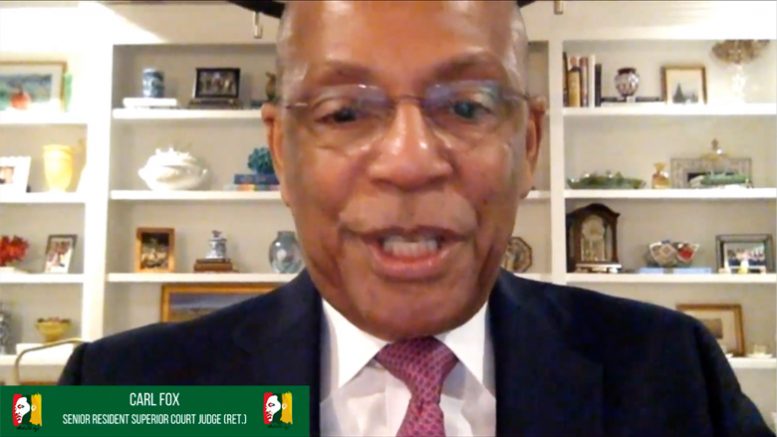 “One group believing in science and facts,” Fox said, “advocating the use of masks, social distancing and frequent hand washing and other hygiene.

“The other claimed hoaxes, conspiracies and fake news, disputing science and rejecting the use of masks, social distancing stay-at-home orders and any infringement on their personal liberties and their quote-unquote constitutional rights.”

Fox said the pandemic caused him to reflect on the words of Dr. King.

“We must learn to live together as brothers and sisters or perish together as fools,” Fox recalled.

The keynoter also addressed racial-reckoning caused by the police murder of George Floyd and the 2020 presidential election.

Fox, who became the first Black district attorney in North Carolina, in Orange County, and the first Black judge in the local judicial district, drew comparisons between demonstrations during the Civil Rights movement and Black Lives Matter marches that took place during the summer.

Cell phone video recordings and social media turned the average citizen into a vessel to transmit acts of police brutality faster than radio and television had done before, he said, but that still hasn’t stopped some racist, violent officers.

Fox, who retired in 2020 after 42 years of public service, said some opponents of BLM protests accused the participants of being socialists, communists and anarchists. But that’s a worn-out narrative, he said.

“Of course, Dr. King was also called a communist and an anarchist by his opponents,” Fox said. “These people ignore the hidden history and the inconvenient truth of rioting by white mobs during the Civil War and well into the 20th century. They want to make this a totally Black thing. It’s not new in American history: it’s just been hidden.”

The insurrection on Jan. 6 at the U.S. Capitol by supporters of President Donald Trump depicted the difference between how Black and white Americans are treated by law enforcement, Fox said.

“Dr. King once said, ‘Ultimately, a genuine leader is not a searcher for consensus, but a molder of consensus,” he quoted. “President Donald Trump has been that kind of leader. He has indeed said things and done things that ordinary people would not say and do. But they feel somehow that they are able to say and do those things, and that he represents how they really feel, to some extent, by his words.”

Fox also noted a more local incident, the protests outside the Chatham County Courthouse grounds opposing the removal of the confederate monument that stood there.

“(The statue) isn’t there, and neither are the protesters,” Fox said. “And it takes courage to make those kinds of decisions. And finally, we have to be able to forgive those that we have opposed and who have opposed us.”

What helped you make it through?