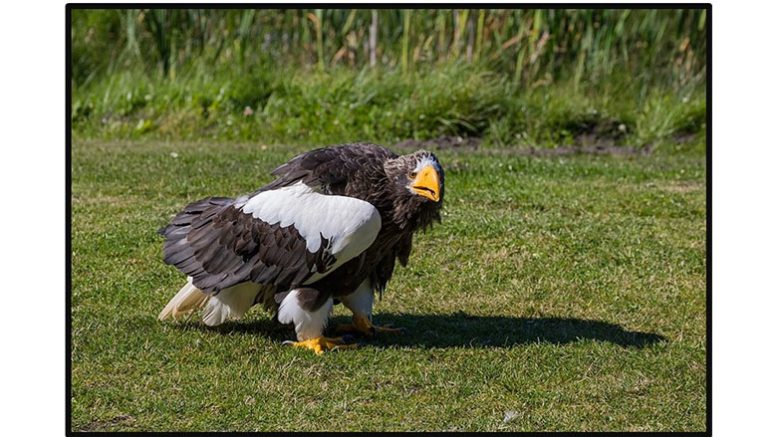 When a bird turns up in an area where its species doesn’t normally spend time — either year-round or during migratory seasons —many people will travel long distances to see it. Most of these birders are working on “life lists” that tally how many bird species they have ever seen; others are trying to see as many species as possible within a certain area or time period.

In January, at least three local birders joined the ranks of these celebrity bird chasers, traveling all the way to Maine to see a Steller’s sea-eagle, a raptor normally found in northeastern Asia (e.g., Japan, Korea, China and Siberia, where they breed). There are only 3,600-4,670 adults of this species left in the world and they are listed as threatened by the International Union for Conservation of Nature (IUCN).

It was the rarity of seeing one of these birds on the North American East Coast that led Tom Driscoll and his friend Vern Bothwell to make a three-day trip up to Maine, where the bird had been spotted in January. Before this enormous avian had arrived there, it had traveled between August 2020 and December 2021 from Alaska to Texas, Nova Scotia, Quebec and Massachusetts, evoking tremendous wonder in the birding community about why it was flying around so far outside its normal range. With a wingspan that can reach 8 feet, this raptor can weigh 13-20 pounds, making it twice as heavy as a bald eagle and about a foot taller. This sea-eagle has a very large orange bill, a wedge-shaped tail and striking white patches on its wings.

Tom and Vern were following sightings of the bird through a rare-bird list on GroupMe and decided to go up North after completing a bald eagle count at Jordan Lake. Tom knew he would not be traveling to the sea-eagle’s home territory in Northeastern Asia or Siberia, and he hoped to score a new “life bird” to add to his total list of over 4800 species seen so far in his more than 40 years birding.

The two NC birders just missed seeing the sea-eagle when they arrived at its last-seen location and they failed to spot it the next day as well. They were happy to see other beautiful birds, such as harlequin and long-tailed ducks, but it was that “vagrant” they really wanted to see. (In ornithology, a vagrant is a bird that wanders outside its normal territory.) The Steller’s might have begun wandering to find a new place to live due to habitat loss or weather-related events. In its home territories, the species is threatened by lead poisoning, brown bears eating their young, and climate change.

Finally, on the third day of Tom and Vern’s trip, when they had already started south in hopes of spotting a snowy owl during their trip back to North Carolina, they got a call saying that the sea-eagle had turned up near the Maine State Aquarium at Boothbay Harbor.

They turned around and upon arrival saw scores of people with scopes and binoculars watching the huge bird, which has been seen eating waterbirds such as ducks and geese. The next morning, Tom and Vern wandered a bit away from the crowd and caught sight of the Steller’s in a nearby cove. Tom managed to get a few photos of his quarry, which impressed him with its size, huge beak and talons and quite distinctive plumage. Around the middle of January, the eagle seemed to have disappeared and many bird chasers were disappointed at missing him (or her). An Audubon Society staffer said that at least 5,000 people had come to Maine to see the Steller’s. As newcomers were being disappointed, a webinar was organized to give information on the species’ natural history, why this particular bird may have become a vagrant, and to share information about its travels. Some 1,000 people signed up to watch and a recording is available to anyone interested in viewing it.

On Feb. 13, the sea-eagle’s followers were delighted when the bird was spotted once again, not far from Boothbay Harbor. The celebrity bird was seen on the Feb. 14 as well and it’s conceivable that many avid birders may now travel to the northern state. In the meantime, here in North Carolina we have birders journeying to Orange County to see a snow goose who strayed inland from the coast and many Piedmont bird chasers are traveling to the coast to see an errant mountain bluebird — only the second one to have been recorded in this state.

Many thanks to Tom Driscoll for sharing information about his trip to the frigid North (-19° F with the wind chill factor) to catch sight of a rare bird!