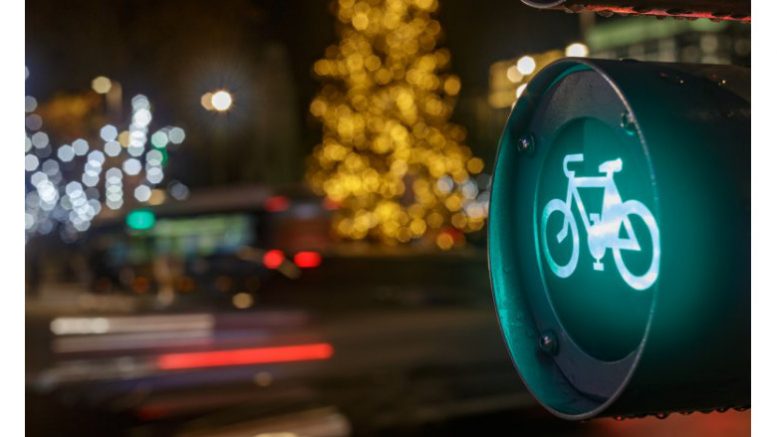 Enough with the socks. After nearly 40 years as an adult cyclist, I have all the socks I’ll ever need. Likewise with spare tubes and saddle bags. No more, please. What I’d like this year, finally, is some big stuff. Really big. Like, infrastructure.

I’m talking about the kind of stuff you can see from your sleigh when you fly over Denmark or the Netherlands. No, I’m not asking for a Hovenring; that would be overkill for Chapel Hill or Carrboro. I’d be happy with protected bike lanes on our busiest roads. You know, instead of those painted-on lanes that go nowhere and deliver cyclists to dangerous intersections. That’s what I’d expect from a trickster god, not from you, Santa.

Speaking of intersections, better traffic signals are on my list.

You can start with detector loops that trip the light when a cyclist pulls up. I also want signals that don’t turn red before a cyclist is halfway through the intersection. But you can do more than just retime the lights. Bring those cool signals that light up a green bike icon and tell drivers to watch for bikes. You can drop off the parts at Public Works.

Better signs would be nice, too. Instead of those awful “Bike Lane Ends” signs at roundabout entrances, get the ones that say, clear as Rudolph’s nose, “Bicycles May Use Full Lane.” Is that too much to ask? You can also get your elves busy making new speed limit signs to install at the same spots. Tell your little helpers to shave off some speed—18 miles per hour, not 25, would be about right.

Now that I think of it, fresh paint to touch up the sharrows markings around town would be good. This shouldn’t be a big deal, because there aren’t that many of these markings to begin with. I’m not sure if the paint should go to Public Works or NCDOT. It’s not always easy to tell who is responsible for what around here. You might need some magic to figure it out. Sharrow markings on Old Durham Road at the intersection with Fordham are worn and hard for drivers to see, putting cyclists at risk. Santa, can you send a work crew to freshen up the paint? Photo by Michael Schwalbe.

You know from our past dealings that I’m an old roadie. I like going fast on the smoothest, wide-open tarmac I can find. It’s the Donner and Blitzen in me. So while I probably won’t much use them, these items go on the list: connector paths.

These paths can be our gift (since I’m the one asking) to people who would use bikes for transportation if they didn’t have to deal with scary roads and intersections. All you’ve got to do is build some paved paths between neighborhoods so people can get around on bikes without cars constantly buzzing by at their elbows. Hire more elves if necessary.

The in-town infrastructure I’m asking for is important because cars and bikes do the riskiest mixing in town. So if you have to prioritize, it’s fine if you put protected bike lanes and connector paths at the top of your worklist. But the country roads need upgrades, too. My big ask here is for wider shoulders. Edge breakdowns, like this spot on Turkey Farm Road, are caused by insufficient shoulder support and poor drainage. Santa knows that paved shoulders enhance safety and save money on maintenance in the long run. Photo by Michael Schwalbe.

I don’t mean wide wide. Nothing so much as a proper five- or six-foot bike lane. I’d settle for a well-kept three-foot shoulder to the right of the white line, throughout the county. These would help make roads safer for everyone, drivers and cyclists alike, by giving everyone a more generous margin for error.

I know, I know. Wider roads cost more. But only up front. Because roads break down at the edges, wider roads last longer and save money over time. Excuse me for pointing out the obvious, but because you often travel above it all, so to speak, I thought perhaps you’d forgotten this bit of civil engineering wisdom. This isn’t perfect, Santa. The paved shoulder should be a foot wider. But cyclists would welcome more country roads built like this. We’re also glad to see signs that remind drivers to watch for cyclists. Photo by Michael Schwalbe.

Maybe it’s more than you can handle in one year, but if you want to take a longer view, this would be a great area for a network of cycling highways. You could start with something simple, like paved bike paths between Chapel Hill, Durham, and Raleigh. It would be like an area-wide network of American Tobacco Trails, albeit with a practical purpose (and minus any gratuitous celebration of tobacco, of course).

I hope you appreciate that I’m not asking for anything fantastic. You’ve delivered every item on my list to people elsewhere on the planet. Are we no less deserving? We’ve been nice, too, you know—and green, or greenish, at least in spirit.

If I were inclined to ask for something that stretches the bounds of possibility, it would be what neuropsychologists call a cognitive module—a bit of brain wiring that helps people think in a particular way. The module would help people see the climate disaster that looms if we keep building more roads for more single-occupant motor vehicles. We’d need a lot of these modules.

Maybe you could even create a version for politicians and transportation bureaucrats, a version that would make it impossible to use the phrase “motor vehicle throughput” without a twinge of pain. I suppose I’m getting science-fictiony here, but I think the cognitive module idea warrants exploration, considering the gift to humanity it would be. Surely more so than smart phones, which were science fiction 30 years ago.

I know, too, that “infrastructure” doesn’t sound very Christmassy, and it’s hard to work it into a song. Who would sing, “I’m Dreaming of a Wide Bike Lane,” or “Have Yourself a Merry Little Sharrow”? Maybe this is why so few people send you lists like this one. We lack the music to inspire the effort.

But, seriously, Santa, better infrastructure is what we need, all of us—cyclists and walkers and everyone who cares about keeping the planet livable. We’ve got nowhere else to wear all those socks you’ve brought us over the years. So, please, scratch the Colnago C68 I mentioned in my last letter and bring the big stuff, the stuff that will bless us every one.