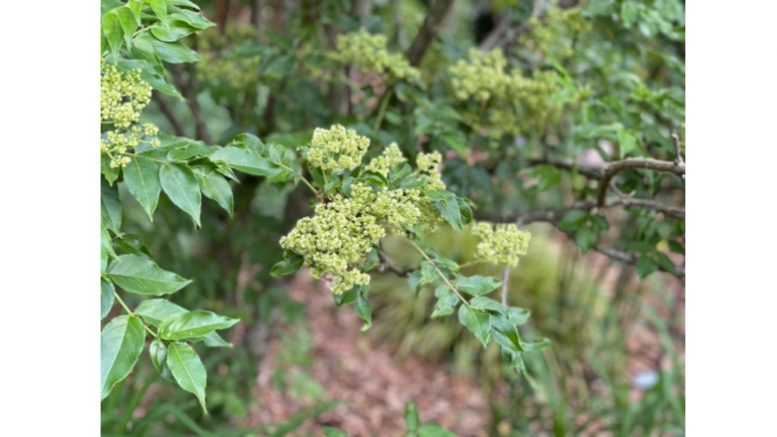 When I first moved to Chapel Hill in 1992, JC Raulston ruled the local horticultural world. He was an inspirational professor at NCSU, whose disciples fanned out, spreading the word: Gardening was a stimulating pastime, filled with new plants to explore. We felt freer then as we didn’t have to limit ourselves to native plants and plants that repelled deer as deer hadn’t yet invaded our suburbia.

JC’s motivation was the introduction of new plants to the U.S .horticultural world at a time gardens were filled with the same monotonous plants. In 1992 our landscape was filled with azaleas and Bradford pears – in fact, JC estimated that American gardens consisted of just 40 plants in all, making for a boring landscape.

He also wrote the most engaging horticultural newsletters that I have ever read. Check them out on the JC Raulston website as they still make for delightful reading. As Allen Lacey states, Raulston was a plant evangelist who advocated for “superior but neglected” plants. When he died in an automobile accident in 1996, the horticultural world mourned, and in many respects still mourns today.

One of his introduced plants was one he discovered on a trip to Korea. Euscaphus japonica, aka the Korean sweetheart tree, is a head-scratching name for what I would call a perfect specimen tree for the sun garden. Suitable for gardening zones 6-8, this is a tree unlike any others I have seen.

Five years ago, I chanced upon a description of this tree and immediately knew that my garden needed – nay, required – it. This NCSU introduction has much to commend it. It has proven to be remarkably hardy down to zone 6, it has a lovely striped bark that provides winter interest and, most importantly, it has the most remarkable seedpods I have ever seen, which is the ultimate reason you want this tree in your garden. The May white flowers are rather insignificant, although I have noted that the bundles of these small flowers grow bigger every year. Larger red heart-shaped seedpods replace the inconsequential flowers, gradually opening in the fall to display rather large black seeds. Before you rush out searching for Euscaphus japonica seeds, let me assure you that germinating these seeds is very difficult and is one of the reasons that you can safely plant this tree in your garden without having to deal with innumerable offspring.

Germination requires a bit more than gently placing them in the soil. After soaking them in the water, they require a cold spell of 60 days followed by 60 by days of warmth before succumbing to another 60 days of cold. Not only does this prevent Euscaphus invasiveness, it also means that nurseries have difficulty with germination – it can be done but it isn’t easy.

The hardest thing about establishing this tree in the garden is finding a specimen. It’s a rather small tree, reaching a height of perhaps 15 feet, but not only is it hard to propagate, it is also largely unknown in the nursery industry. Before his death, JC managed to introduce it to the plant world but it badly needed his reputation to capture the public’s imagination.

I managed to scrounge around, locating two specimens, one at a nursery that no longer exists, and the other at Camellia Forest. One is growing in full sun while the other receives some shade from the afternoon sun. The sunny one is glorious whereas the other one does not have the same abundance of seedpods. Obviously, I recommend growing it in full sun as the seedpods are its raison d’être.

In the six years I have had the two trees, I have experienced exactly two seedlings, both of which have been snapped up by deserving friends. What better gift can you think of?

Addendum: The opium poppies are on their way out. To establish a lovely crop, choose a sunny area that lacks mulch and spread the seeds in December or January. It can be an area that already houses established perennials. Once the poppies arrive, leave them in the ground until their seed pods have burst, scattering their seeds over the area. Let nature handle this. When we’ve tried to rush the process, a meagre crop has resulted. Once the seedpods have burst, you can then tear out the dead annuals.

It’s important to leave the area alone as you don’t want to bury the seeds. And poppy seeds loathe mulch so do not mulch the area. Then, toward the end of next March, you’ll notice some blue-green plants sprouting and soon, you too, will be the parent of opium poppies.

Welcome to the World of Hydrangeas

Be the first to comment on "A Favorite Plant: Euscaphus japonica"