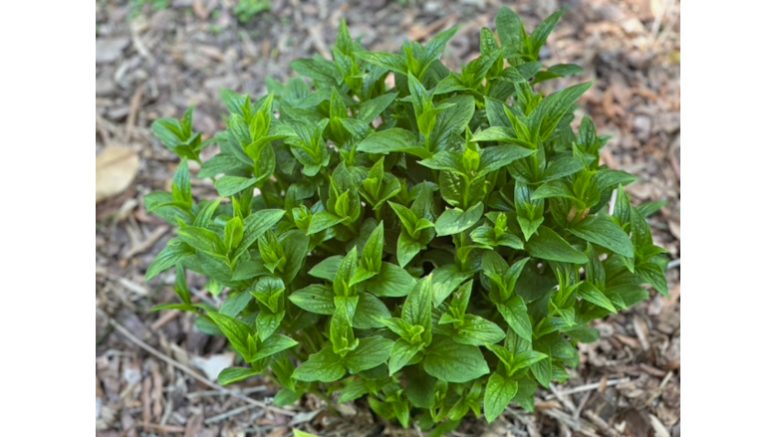 It began as an impulse buy. Finding myself standing among some woodland plants in the now (sadly) defunct Niche Gardens, I spied a small, nondescript plant that I had never noticed: Spigelia marilandica. Perhaps, having grown up in a Maryland suburb, I was attracted to the second part of the botanical name. Perhaps I had enough foresight to suspect this was an endearing plant. Or perhaps I had an empty spot on my tray holding plants that I was buying. Regardless, this Spigelia made it home with me.

Spigelia marilandica is truly a spectacular plant for any southeastern garden. A southeastern native wildflower – yes, it grows beautifully in Maryland – it is sometimes referred to as “Indian Pink” because the genus Spigelia contains some plants having pink roots, ones that Native Americans used in their preparations for deworming.

Now this isn’t a large plant as it reaches a height of only 12-24 inches (all mine seem to hover around 12 inches) and it will eventually reach a width of perhaps 2 feet. Because mine seemed not to want to take on added dimensions very quickly, I found using it as a basic filler among various perennials in the garden made the most sense.

The real reason to buy this native plant is due to its spectacular flowers. The red flowers first arrive on the stem tips in early summer in the shape of miniature trumpets. Suddenly the flowers open to display a dazzling yellow star. En masse, these rather small flowers make a spectacular statement. However, this isn’t the only attractive quality this plant has. It’s poisonous so deer and rabbits leave it alone, which is no small matter if you live in an area overrun by deer. Also, the tubular shape of the flowers is very attractive to hummingbirds – and who doesn’t want more hummingbirds in their garden? In fact, Spigelia marilandica places eighth on the list of desirable native plants for hummingbirds on the Operation Rubythroat website.

There is one feature of this plant that might frustrate the new gardener: It’s hard to find. This is because the plant is slow growing so it might be 7-10 years before it can be divided. And, you cannot happily turn to seeds as Spigelia seeds are even harder to find for the simple reason these seeds must be fresh. Once the seeds dry out, they will probably refuse to germinate and I think we can mostly agree that seed refusal to sprout leads to intense gardening frustration.

Not only do the seeds have to be fresh, they demand 2-3 months of cold, followed by warm weather. If you’re lucky enough to chance upon some viable seeds, try to plant them in the fall when the cold weather will eventually ensue.

The best thing to do is to go to the Plant Delights website and order several specimens. Plant them where they can get some morning sun (although they are woodland plants, I find they benefit from morning sun), let them grow for a decade – and you might be able to divide the plant by then or, with luck, the plant will have produced a few seedlings around it. According to Tony Avent, Spigelia marilandica is relatively easy to propagate via cuttings but the plants from cuttings must be planted early as they need to develop an “underground growth bud” if they are going to return the following year. Since the plant goes dormant in the fall and loses its leaves, following this schedule for the home grower is a bit more difficult than it is for experienced growers using greenhouses.

Citing a figure of 2 million specimens sold, Tony says that the English have wildly embraced our native wildflower. In the history of Spigelia marilandica here in its native land, we have never even remotely approached the 2 million sales figure. Sometimes, it takes foreigners to point out the treasures we have here in the U.S.