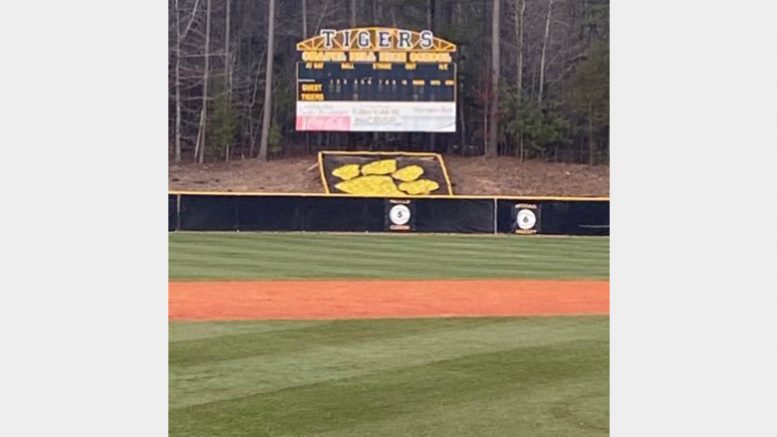 The baseball field at Chapel Hill High has been idle since March 10. The North Carolina High School Athletic Association has suspended the spring sports season because of the coronavirus pandemic.

When the players are away, there’s still a big field that requires constant mowing, watering and picking weeds. Ask any coach and they’ll tell you that the beauty of their park correlates to the pride they have in their own program.

Right now, though, a field is about the only thing baseball coaches have. Since the onset of the coronavirus pandemic, the fields across Chapel Hill and Carrboro have been barren. There have been no games or practices since March 11.

Nonetheless, Chapel Hill High baseball coach Bryan Tuck has been at his ball field twice a week, at least.

“I need to drag the infield right now,” Tuck said. “That’s about as much social distancing I can do right now.”

This is one spring where Tuck has nothing but time. The North Carolina High School Athletic Association suspended the spring sports season on March 12. Last week, the NCHSAA ruled that May 15 would be the earliest date that athletics could resume.

“I don’t see us coming back,” he said. “I know it’s unofficial, but if we came back on May 15, that’s usually the second round of the state playoffs in baseball. The state always pushes for us to be done with the state championship by graduation.”

The empty fields and barren campuses are the strangest sights imaginable to anyone who loves sports or life in general. Spring is supposed to be a time of renewal. It’s when the NCHSAA sanctions nine sports. There’s usually multiple games or practices going on every night at all schools.

Not this year. If you’ve driven past Chapel Hill, Carrboro or East Chapel Hill high schools recently, there’s an uncommon, uncomfortable silence. There are blank scoreboards hanging above baseball fields that are in impeccable condition, just waiting for anyone to come out and play.

For many coaches and players, it’s all quite painful.

Tuck, in his second year at Chapel Hill, was set to make a run for the Big 8 Conference championship. Last year, the Tigers missed the playoffs for the first time since 2008.

“This was the year where I thought we could make a run at being one of the top two teams in the conference,” Tuck said. “We gained a lot of experience from last year.”

Chapel Hill rolled past Vance County, 18-4, in the Big 8 opener on March 10. The following day, Tuck prepared his team for a nonconference game against Rolesville by pulling out his Hack Attack pitching machine and set it up to deliver 85-miles-per-hour fastballs so the Tigers would be ready to face Rams hurler Dylan Mason.

They had no idea that it would be their final function as a team.

By the time Tuck got home, the NBA had suspended its season after the Utah Jazz’s Rudy Gobert tested positive for COVID-19. Within 24 hours, the rest of the dominoes across the sports landscape fell at warp speed, including the NCHSAA’s mandate.

At that point, the suspension was until April 6, a period of three weeks. Tuck, along with many other coaches, knew better. They all realized the end had come suddenly and cruelly after barely two weeks worth of games.

Tuck had a team meeting on March 12, after Rolesville had canceled its trip to Chapel Hill, to inform the players their season was likely over.

“I think a lot of us were in shock,” Tuck said. “There wasn’t a lot of facial expressions. The kids were just trying to understand and dissect everything. I wanted to make sure they were on course to graduate.”

The abrupt end made it impossible for Tuck to bid a proper farewell to his 12 seniors, who make up two-thirds of his roster. Since then, the coach has held separate group chats with his varsity and JV players twice a week.

The suspension of games also has thrown several annual events into question. Chapel Hill and East Chapel Hill usually end the season with a two-game series. Former Tigers Coach Lee Land helped organize it into a fundraiser for UNC’s Lineberger Comprehensive Cancer Center called Vs. Cancer. It’s become a springtime tradition where players from both teams shave their heads for charity.

This year’s game was supposed to be May 1 at Tiger Field. Last year, the two schools combined to raise $15,000.

Even if the NCHSAA doesn’t officially resume the season, Tuck would like to see the Wildcats and the Tigers find a time to play when the circumstances are right. “It’s probably far-fetched, but I’d like to play East like it was a scrimmage,” Tuck said. “That way, we can recognize our seniors. We could substitute pitchers every two innings to make sure no one gets hurt. We could just let the kids play and everyone gets to have a good time.”

Be the first to comment on "A Field of Dreams, Not Games"