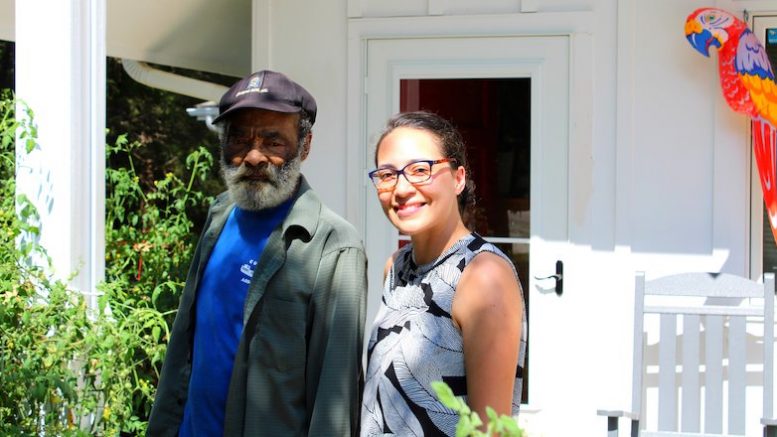 Editor’s Note: This is the last article in a four-part series during the month of September on affordable housing in the town of Carrboro. To read Part 1, click here. For Part 2, click here. And to read Part 3, click here.

His life has taken him from learning to construct chicken houses at his grandfather’s farm near Chapel Hill to using his acquired skills as a brick mason. For several decades, he worked on creating dozens of homes and offices in Carrboro, Chapel Hill and parts of Durham. The slender man you see today walks with a cane but exudes a strength of character that makes one a better person for having met him.

Pee Wee has lived most of his life in Chapel Hill. He can tell you when Franklin Street was a dirt road from the UNC Planetarium to McDonald’s. He can describe how to landscape your garden, prune your bushes and grow tomatoes.

Pee Wee can show you where he made his home behind Chapel Hill Sportswear and share how he became known as the unofficial “Mayor of Chapel Hill.”

However, the main thing that Pee Wee Lee wants to share is “thank you.”

Thank you to folks who enabled him to leave a men’s shelter in Chapel Hill and become the first affordable tiny home resident in Chapel Hill. So moved by his spirit, the non-profit group that built his home asked to bear his name: Pee Wee Homes.

“I was born in Trenton, New Jersey. My mom was a WAC (Women’s Army Corps), and my daddy was in the [U.S.] Army. We moved here when I was two and lived on my grandfather’s farm. His name was Robert Suitt,” said Pee Wee.

His memory is sometimes uncertain due to a stroke he suffered in the ’80s, leaving him unable to function, thus leading to his life on the streets.

Pee Wee’s luck changed when his circumstances brought him to meet Maggie West, the co-founder of the Community Empowerment Fund and the co-founder of Pee Wee Homes. West was inspired by other stories from people who had lived so long in the community, but who had to leave because of the lack of affordable housing, according to Erika Walker, executive director of Pee Wee Homes.

Pee Wee Homes’ mission is to create dignified, affordable, tiny homes in a caring community for people transitioning out of homelessness. Their first project was built in 2018 on Craig Street in Chapel Hill.

“When they asked Pee Wee if he would like to live independently, but within the community, with the support of other folks nearby, he jumped at the chance,” said Walker. “He was one of our first five residents, and the first resident at our Advocate Campus on the Episcopal Church property on Meeks Road in Chapel Hill. Today, Pee Wee lives in a charming 300-square-foot home that provides him with shelter, water, heat, television and all the necessities, plus a few extras: a welcoming front porch with a wooden rocking chair. Meals on Wheels brings him food and Pee Wee Volunteers keep his house clean and check on his health. They have a financial manager that helps him pay his bills and track his income. “It is a wonderful place to live,” says Pee Wee. “It really is.”

The Town of Carrboro plans to cooperate with Pee Wee Homes to build three tiny homes similar to those in Chapel Hill. Pee Wee Homes will construct the houses across from Baldwin Park and Community Garden. These tiny homes, from about 140 to 320 square feet, will offer space efficiency and creative green decisions to keep bills low.

“We were so excited that Carrboro gave us the land to build on. We plan on starting to build as soon as we get through the permit process,” said Walker.

How did it happen?

Strong community action led by the Marian Cheek Jackson Center, the Inter-Faith Center for Social Service and the Community Empowerment Fund (CEF), along with direction from the Carrboro Affordable Housing Advisory Commission, encouraged the council’s vote.

“My experience with the Town of Carrboro has just been a sense of generosity and working in partnership, and thinking creatively with what the town can do with publicly owned land,” said Walker.

“Their goal has been to maintain the character of the community, respecting neighbors and also addressing the real, dire need for affordable housing for folks,” she said.

Groundbreaking is expected to be this winter. The permit application is pending, and they are in the design phase for the Hill Street homes, according to Walker.

Pee Wee said that he hoped he would be there when the ground is broken for the Carrboro homes.

1 Comment on "A Living Legend’s Legacy to Affordable Housing"