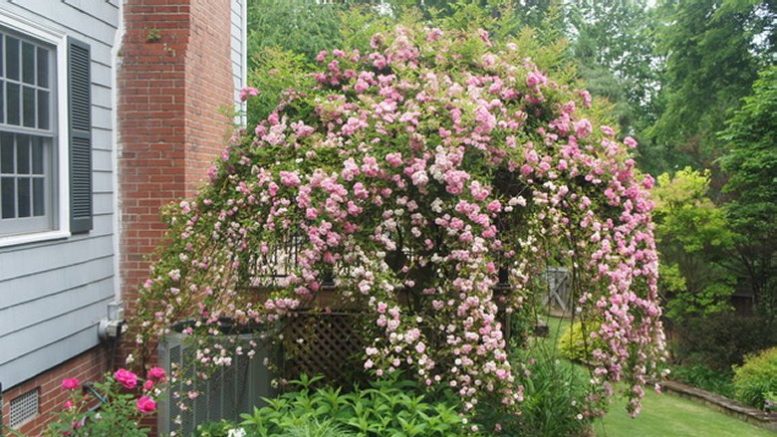 Two “Peggy Martin” roses exhibit their blooming long canes and have a story to tell. Photo by Kit Flynn.

A pair of my beloved roses has decided to leave my garden—and I’m in mourning. I discovered Rosa “Peggy Martin” in 2007 and her story touched me, reminding me that so many of our roses have stories attached to them.

Because the genus Rosa is quite old, existing well before the Romans and the Greeks, many times the lineage of a particular rose is lost. The famed “rose rustlers” in Texas are now trying to track down some of these unnamed roses so that their genetic markers are not lost forever. And this is the story about one particular unnamed rose.

Peggy Martin is an acclaimed rosarian who had a well-known garden just outside of New Orleans. The story goes like this: Her hairdresser (sometimes it’s a close friend) gave her a cutting from an unnamed rose, a cutting that Peggy Martin managed to root and plant.

When Katrina threatened New Orleans, Peggy Martin and her husband determined that they had better retreat to Baton Rouge for safety; they pleaded with her parents to join them. Her parents, reasoning that they had managed to sit out many hurricanes, decided to remain in place.

Alas, her parents did not survive the hurricane. The toxic stew delivered by Katrina buried Peggy Martin’s garden. When Peggy and her husband returned two weeks later, they found only two plants had survived, one being a crinum and the other being this nameless rose. Peggy, devoted rosarian that she is, determined that this rose had earned the right to be named the Katrina Rose, but such is her standing in the rose world, this rose soon bore the name of “Peggy Martin,” a.k.a., the Katrina Rose.

Now, “Peggy Martin” is classified as a rambling rose, indicating that her canes are not stiff as opposed to those roses designated as climbing roses. She is a profuse grower and her canes can reach a distance of 20 feet—this is a rose intent upon making a statement.

In 2007, I bought three of these roses. One I installed on a trellis I already had, one that she quickly outgrew in two years. As she was covering the sidewalk leading to my house, we extended the trellis over the sidewalk so that now, in order to get to my front door, visitors must walk under the rose. The other two we attached to a large trellis on the side of the house.

The results were spectacular. Every May, they threw out at least 5000 small blooms—the rose blooms are small but en masse, they take one’s breath away. While she’s classified as a rebloomer, she puts out the gigantic display just once a year. The two on the side of the house flourished—and I enjoyed seeing the surprised looks on those who rounded the bend, suddenly seeing the roses in full bloom. The “Two Peggys” in their glory days set off the side yard garden. Photo by Kit Flynn.

Gradually I became aware that the two in the side yard were no longer making quite the stunning statement. Attributing this to the sudden growth of two of my neighbor’s trees, I shrugged as there was little I could do about it. I felt that perhaps the ladies simply weren’t getting their full allotment of sun as they now received only a few hours of morning sun before the house and the trees blocked off further access.

Ask me now what my garden looked like in 2010, I’ll draw a blank and will have to refer back to the photographic record. Gradually, over the years, I noticed photos I’d taken of her in her full glory days and knew something was definitely wrong.

Last year, it was apparent that something had to be done, that the two ladies were definitely not thriving. Consequently, because these two shapeless trees now resided in the deer run between my neighbor’s and my properties, I asked if I could take down the trees, explaining they were overhanging over the deer fence. The “Two Peggys” today give rise to mourning instead of blooms. Photo by Kit Flynn.

Taking down the trees gave the roses more access to the sun, but it hasn’t helped. I had hoped at least one of them would recover, but the canes have become sparser and sparser. It’s hard to know what has taken them down. It’s not due to rose rosette disease, a condition I recognize a mile away. I simply have no answers. The “Peggy Martin” in the front is still doing well, so my fingers are crossed that she will survive.

Meanwhile I am left with another huge trellis that will need covering and I’m thinking of planting a Lady Banks rose there. This species of rose doesn’t require as much sun as other roses, so the morning sun hopefully will be sufficient. While she only blooms once in late March, her flexible canes remain attractive throughout the year. Yes, I am breaking a cardinal rose rule of never planting a rose where one has died but I am willing to take a chance.

I am left feeling bereft. How can a rose survive Katrina’s toxic stew only to succumb while dwelling in my garden? This ultimate survivor could not endure in my garden, leaving me to wonder about my ability to safeguard my plants.

However, this is also a firm gardening lesson because every gardener soon realizes that they are dealing with life and death in the garden. We viciously pull out performing plants because we don’t like them or they’ve grown too large. We determine which plants should grow side-by-side to one another, despite the fact they would never meet one another in the wild.

The difference here is that we like to be the deciders. It’s tough when a plant opts to leave us all on its own—and it can make us begin to wonder whether we know anything about gardening at all.

What Ever Happened to Bedbugs?