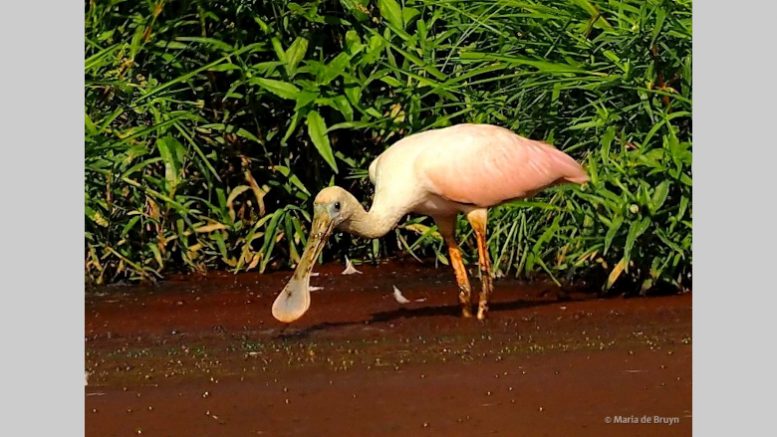 When an unusual avian visitor turns up locally, birders tend to get excited. Many birders keep “life lists,” records of all the different bird species that they have seen worldwide or in a specific area. So, when a “rare” bird visits an area where it doesn’t normally spend time, many birders will travel to see it and add it to their list(s).

That has been the case this month after a roseate spoonbill was seen in a farm pond in Orange County. The pond was visible from a main road, so people parked along the road and peered over a fence using binoculars or cameras to get a closer look.

Roseate spoonbills live only in the Western Hemisphere and until recently rarely went further north than their breeding grounds in Florida, Louisiana and Texas. They now are starting to travel up the East Coast in summer and are also venturing more inland. This summer, they’ve been spotted in Durham and Wake counties, too.

The spoonbills’ coloration comes from their food. Their diet consists of crustaceans, snails, fish and aquatic insects found in both fresh and salt water. Aquatic invertebrates have pigments called carotenoids and when the spoonbills eat them, their feathers turn pink. Depending on the birds’ age, location and breeding status, the color intensity can vary from a pale pink to very bright magenta or carmine. When chicks are born, they do not yet have a spoon-shaped bill; it only begins to flatten out when they are 9 days old; the final shape is achieved by 39 days. The bill can be 5.7 to 7.1 inches long (14.5-18 cm). It is about an inch wide just beneath the birds’ eyes and then widens to about 2 inches at the end.

It might seem that these very large bills could make life difficult for the spoonbills, but they use these spatula-like appendages efficiently when feeding. Their nostrils are located at the base of the bill so that they can breathe while foraging. Their technique is to stalk slowly, leaning forward with their bills submerged as they swing their heads from side to side. Israeli scientists discovered that when the bill sways back and forth, it creates tiny whirlpools that suck up prey submerged in the water. When the prey touches the bird’s bill, it snaps shut as nerves at the bill tip are stimulated; the prey is then usually swallowed whole.

As climate change progresses, increasing numbers of roseate spoonbills are expected to move north. Protection of wetlands in our and other Eastern states will therefore benefit this species, as well as other animals that depend on this type of habitat. More advocates for environmental preservation are therefore most welcome!

Be the first to comment on "A New Celebrity Bird"