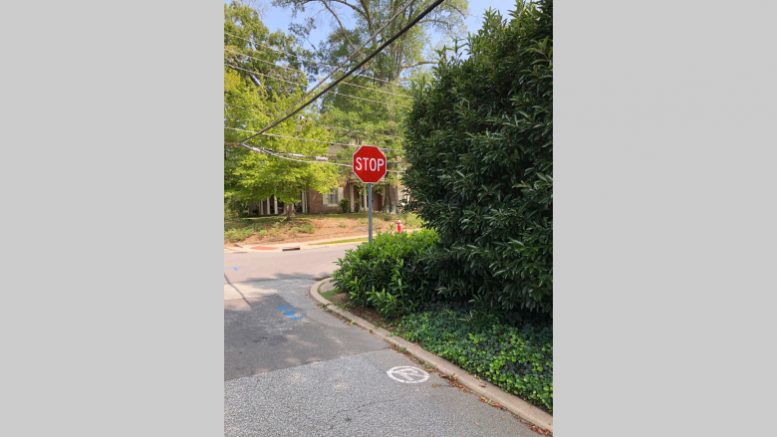 Stop sign on North Street at intersection with Henderson St.

An Open Letter To: The Mayor and Town Council Members

From: Residents of Cobb Terrace

Re: The negative impact of additional traffic on North Street which would result from the new parking deck at 125 East Rosemary Street as proposed

The undersigned residents of Cobb Terrace wish to register their strong objection to the direct connection from the north side of the proposed parking deck to North Street for cars entering and leaving the deck.

The route from MLK along North Street and Henderson Street to East Rosemary is already frequently used as a cut-through for drivers wishing to avoid the Rosemary/N. Columbia intersection lights. Cobb Terrace begins at the intersection of North Street (one block east of MLK) and Henderson Street (one block north of Rosemary). These two streets provide the only means of entering or leaving Cobb Terrace.

Neither of these connectors from Cobb Terrace to main arteries is safe, as currently configured, and a dramatic increase in traffic on these sections of road will make them extremely dangerous for CT residents as well as all other drivers and pedestrians. In addition, there will be gridlock on these streets at times of high traffic in the area.

Of equal importance is the destructive effect this proposed increase in traffic will have on the quality of life in the neighborhood. No more will residents feel free to walk in the street or play pick-up games of basketball as they do now.

There could be 1,100 or more cars entering and leaving the garage each day. Given the proposed arrangement of entrances and exits, a driver exiting the garage who wishes to head east must either make a left turn across at least two lanes of traffic on main arteries or turn right and use the far simpler North Street/Henderson Street route.

Equally, drivers coming from north or south on MLK will find it easiest to turn onto North Street to enter the garage. As locals who drive these roads daily, we know that most attractive and accessible entrance and exit will be on North Street for almost all drivers, given the perpetually backed up line of cars in the 100 block of East Rosemary.

The sections of Henderson Street and North Street in question are simply not wide enough for current, let alone dramatically increased, usage. When the existing on-street parking spaces are filled (which is 100 percent of the time under normal conditions) neither street is wide enough for two cars to pass each other at normal speed. One must normally stop to allow the other to pass.

The sight lines for drivers turning right onto Henderson Street from North Street are blocked by cars and foliage. Cut-through drivers heading north on Henderson generally cut the corner while travelling at high speed. Pedestrians must walk down the center of North Street as no sidewalks exist. Trash and recycling bins left in the street by both residents and town crews are constant hazards.

Existing parking configurations force drivers heading to Cobb Terrace on Henderson Street to swerve into the middle of the Henderson/North intersection, directly into the path of cars trying to turn onto Henderson from North. A few recent photos (taken midafternoon when the town is empty) below will give an indication of the situation.

In our view, providing access to the garage from North Street would be dangerous to all pedestrians and drivers using these neighborhood streets, and particularly to residents who must use them frequently. The increased traffic will cause gridlock, frequently making access to our homes unreasonably difficult. More importantly, this gridlock will make it impossible for any first responder (fire, ambulance or police) to reach Cobb Terrace in an emergency.

We ask that this project not be approved unless and until the access to North Street from the garage is eliminated. EMS Comes Through, Despite Challenges

Emily to the Rescue