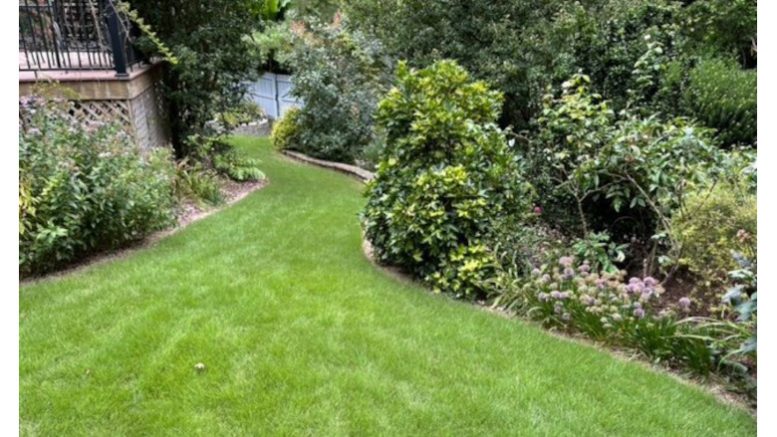 My river of grass. Photo by Kit Flynn.

It’s become fashionable to downplay grass in the garden–and I am the first one to admit that grass has a ridiculous side to it. Think about it: We water and pamper grass only then to mow it down. This routine continues for a good seven months here in the Triangle.

I’m also not minimizing the destructive side to maintaining a good lawn. It simply uses up too many chemicals; gas-propelled leaf blowers and lawnmowers are bad for our environment; and there are better uses for water. However, with all that being said, there comes a time that a gardener has to come to terms with the issue of grass.

There are numerous suggestions on how to get rid of grass, provided your homeowner association will even let you ponder such a scheme. The proposals for grass substitutions never seem to hit the mark, primarily because most of these are unsuitable for foot traffic. And suddenly, the idea I will never be able to play croquet–a game I have gone decades without pondering–on a lawn seems to squelch all these ideas.

Innumerable articles discuss turning the grassy areas into meadows, causing me to shudder. Perhaps this is because to my mind my area of Chapel Hill harbors an unusually high proportion of copperheads–and copperheads love to hide in lush foliage and grasses in an attempt to remain cool in the summer.

Please do not send me notifications extolling the excellence of copperheads. I was born with a strong copperhead fear, something that at my age will not change. They have bitten my beloved Airedales, they are capable of killing my Havanese. And, meadows unquestionably are a good cover for lurking copperheads. No, meadows are not for me.

My relationship with grass has been a long time unfolding. Twelve years ago, I gave a presentation with another Master Gardener on water-wise gardening. Rick was a grass-lover whereas I was a grass-and-weed tolerator. I casually mentioned that it was a waste to expend water on grass in the middle of a drought, only to receive a great rebuff from Rick–and it turned out that most of the audience agreed with Rick rather than with me.

Now, as we quickly learn when it involves grass and the Piedmont, there is no perfect grass. For years I waged annual cycles of tossing down tall fescue seed, watering it, nourishing those pathetic little sprites emanating from the seed, weeding it, and ultimately throwing up my hands in disgust.

Grass, I concluded, simply wasn’t worth the effort. I cursed Frederick Law Olmstead and Frank J. Scott, the two men who dictated that catering to the great American lawn was an American duty. In the words of Frank J. Scott, I was dangerously close to becoming a “slattern,” someone who was unwilling to tend to her lawn.

During the presentation, Rick mentioned the word “Zoysia,” adding that it performed beautifully for him and it required very little water. And thus, an idea became stuck in my brain. I had two smallish areas of lawn that were vital to producing a much-needed contrast to my perennial garden. And, I had visions of turning one of them into what I can only describe as “a river of grass.”

The duo who helped me to maintain the garden mentioned that perhaps I should consider installing Zoysia, which would involve killing off the weeds and the little fescue I had. And, thus a new lawn was born.

We killed off the two areas with glyphosate as this is truly the most efficient way to get rid of two patches of weedy tall fescue. After four weeks of looking at two brown, desolate areas, the Zoysia “Emerald” arrived. Zoysia arrives by sod, not by seed, as it’s a slow grower, taking forever by seed. At first the seams were obvious, taking approximately nine months to completely disappear.

The shock was that there were weeds in the Zoysia–whether they came with the Zoysia or magically took hold, I have no idea. I had to weed, and I had to weed often. In the winter when the grass turned brown, the green weeds, especially the chickweed, were easy to find. When late April rolled around, the grass magically turned green.

Initially we put down a pre-emergent and then a post-emergent to fight broad-leaf varmints at the designated times. Suddenly, what weeds that had survived disappeared or died off from fright. The grass was now thick, green, and beautiful–I now had the river of grass that I had visualized. Since the initial pre-emergent and post-emergent applications, no more have been needed.

Zoysia “Emerald” is not shade tolerant, nor is it inexpensive. Laying down the sod is more labor intensive than is scattering tall fescue seed. However, it requires little fertilization, water, or chemical warfare to look good. It is in one word: beautiful.

As for the neighborhood copperheads, my fence has managed to keep them out – hopefully we’re at the stage of peaceful, albeit wary, coexistence. Grass used as contrast to the perennial garden. Photo by Kit Flynn.

Be the first to comment on "A River of Grass"