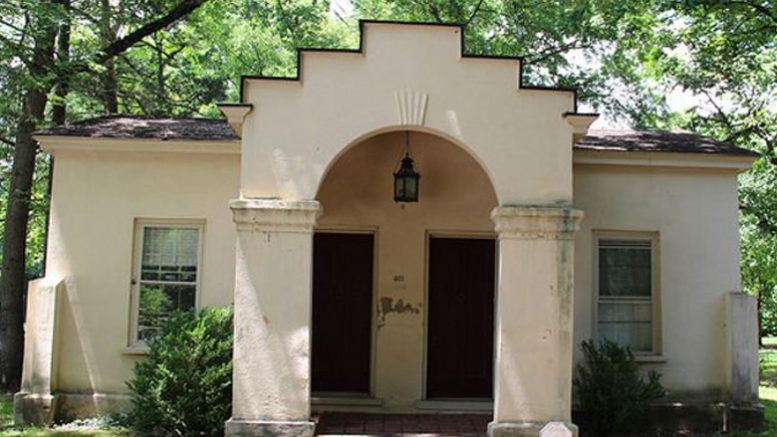 Across from the President’s House on East Franklin Street on the northeast corner of East Franklin Street and Raleigh Road sits the Phillips Law Office. Its small size is easy to overlook while driving through this busy intersection, but this is an important town icon recognizable to
residents, UNC graduates and students, and visitors.

So, what is the significance of this small and unusual building?

Born in 1824, Phillips was a sibling of Charles and Cornelia Phillips, she of bell-ringing fame. He graduated from UNC with first honors in 1841 and was admitted to the bar in 1845. Opposed to secession until Lincoln’s call for troops, he subsequently served in different governmental capacities during the war years. Between the end of the war and 1868 he appears to have had a change of heart and began to support full and complete reconstruction and full civil rights for African Americans.

Phillips joined the Republican Party in 1870, where he fought for the expansion of legal rights for African Americans, triumphing in granting freedmen the right to testify in cases in which they were parties. During 1871 and 1872, he served as an assistant federal district attorney, where he prosecuted Ku Klux Klan cases before the United States circuit court in Raleigh.

During his 13-year term, Phillips was solicitor general during such landmark civil rights cases as US v Cruickshank (1876) and The Civil Rights Cases (1883), where the Supreme Court took the rare route of deciding five separate but closely related cases with one unified ruling. That ruling set the stage for decades of Jim Crow.

Undaunted, late in his career Phillips represented Homer Plessey in Plessy v Ferguson (1896) along with his friend and colleague Albion Tourgée. This author finds substantial parts of their argument pertaining to the 13th and 14th amendments in the Brown v Board of Education (1954) decision.

Phillips died in 1903 in Washington, DC and is buried in the Old Chapel Hill Cemetery.

Now, back to the Phillips Law Office building. It is a gem. Ruth Little in her book “The Town and Gown Architecture of Chapel Hill, North Carolina, 1795-1975,” writes of the structure, ”The cottage’s picturesque architecture and prominent site have made it a beloved landmark in Chapel Hill. Its bold Italianate design with side pediments, a front arched entrance porch with massive classical piers, and a crenelated pediment roof, recall the picturesque designs of Alexander Jackson Davis, the architect who designed additions to Old East and Old West in the 1840’s.”

Preservation Chapel Hill, a local private nonprofit corporation, has held preservation covenants on the Phillips Law since 1982. PCH is pleased to report that the owner of the Phillips Law Office has plans to renovate and return this iconic building to something that reflects its
importance to town and gown history.

The legacy of Samuel Field Phillips as a white, privileged southern male fighting for African American civil rights is little known in Chapel hill except to a few legal historians. At this time in our nation’s politics, it speaks well of our town to celebrate this unlikely advocate of civil rights and southern opposition to the ongoing dismantling of reconstruction.

UNC is now considering renaming buildings to better reflect basic human rights guaranteed in the 13th, 14th and 15th amendments gradually diluted by Jim Crow and still precarious. Might Samuel Field Phillips’ name be considered as a replacement for standing up for human rights, a Carolina value?

6 Comments on "A Small but Important Town Icon"