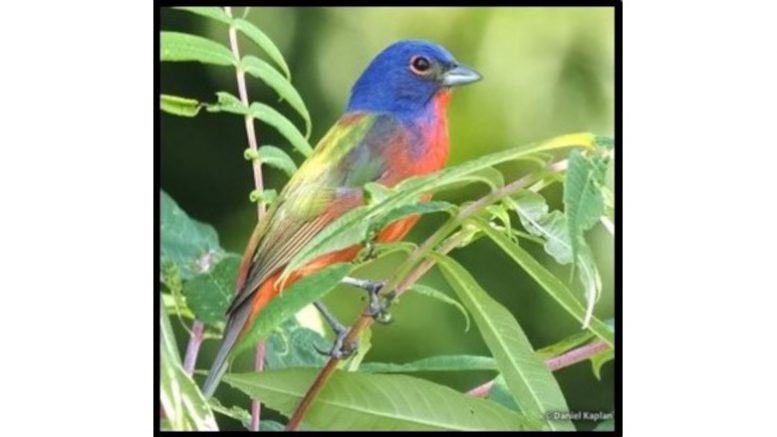 Last month, many Orange County residents were alerted to the eruption of profusely blooming sunflower fields that were attracting both birds and people. The avians were looking for tasty seeds and the humans were seeking beauty and backdrops for photo portraits.

A few weeks later, the Triangle-area evening news programs featured clips of people visiting a sunflower field in Raleigh’s Dorothea Dix Park. Soon birders flocked there as well to catch sight of a bird rarely seen this far inland — a male painted bunting who generated quite a following. By July 31, 184 people had reported seeing this bird to an online birding site and more birders followed in August. (My gratitude to fellow birder Daniel Kaplan for providing a photo!)

Sunflower fields are so popular that they not only feature on the news but also in online tourism guides, such as one touting “The 11 Best Sunflower Fields in NC to Visit in 2022.”

The NC Museum of Art has sunflower fields and offered its second annual Sunflower Photography Workshop in August. It was quite popular as the event had already sold out at the end of July! Many birds love sunflower seeds, but it can be difficult to see the foragers as they may be eating at blooms lower down on stems. The bright blue indigo buntings are sometimes easy to spot, and red-winged blackbirds and American goldfinches will often perch atop a bloom to peck away at the ripening seeds. I took one large sunflower (with permission of the field’s owner) and attached it to a feeder pole in my yard. It has become a favorite foraging spot for a resident Carolina chickadee.

However, birds and people are not the only ones that like sunflowers. A field of these flowers is a boon for pollinators. The Orange County fields that I visited featured hundreds of butterflies such as skippers, swallowtails, orange sulphurs and variegated fritillaries. They and the bees were also feeding on other plants and flowers in vegetation along bordering roadways.

Sunflowers constitute a beneficial crop for several reasons. They provide farmers with a valuable cash crop purchased for bird seed, sunflower oil and to make snacks that people enjoy. The stalks are used for cattle feed.

In addition, scientific studies have shown that sunflowers assist in phytoremediation, a process that helps remove and destroy polluting contaminants in soil, water and air. Their deep taproots help aerate soil and make it richer for growing other subsequent crops as well. Many kinds of bees were carrying pollen gathered in the sunflower fields. Studies have shown that the pollen, in addition to providing bees with food, also has medicinal value for honey bees and common Eastern bumble bees. The ingested pollen enables them to suffer less infection from two common parasites, a boon for bees who might succumb to colony collapse as a result.

Some sunflower fields may still be blooming through August and an online search can help you find them if you’d like to enjoy these wonderful flowers and their wildlife beneficiaries. If you have a garden, you might consider adding sunflowers to your vegetation mix if you don’t have them already. You can still plant some now in hopes of late autumn blooms.

This is a good time also to remember that Ukraine became the world’s leading exporter of sunflower seeds until Russia’s ongoing invasion of the country brought this trade to a halt. Farmers who were still able to grow the country’s national flower are stuck with supplies and no income. Consider supporting organizations that are working to provide the Ukrainian people with humanitarian aid:

Be the first to comment on "A Sunflower Field is Not Just Sunflowers!"