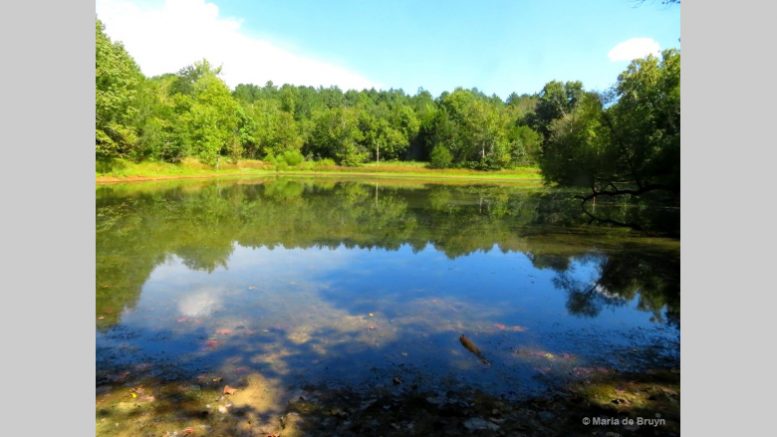 A combination of abundant vegetation and some kind of water — a creek, river, wetland, pond or lake — is one of my favorite types of natural area to visit for wildlife watching and photography. Water attracts wildlife and the chance of seeing something unexpected seems a bit higher in such places. This was the case recently at a pond in a local nature reserve.

I had descended a small slope to stand on a mudflat and was suddenly surprised by a large splash to my left. When I looked, a largish head was forging across the water in front of me. I at first thought it was a muskrat since there is no beaver lodge in this enclosed pond.

Muskrats and beavers look very similar, but beavers tend to be much larger; they have large flat tails rather than thin ones. I kept hoping to see the animal’s tail but the rodent kept its body mostly submerged as it swam back and forth. Finally, for a brief moment, its tail came into view — it was indeed a beaver, out and about in the late morning! (They are usually active at dusk, at night and around dawn.) A couple passing by also caught sight of the tail and were clearly happy to see this representative of North America’s largest native rodent species. Then, suddenly, another smaller head popped up and swam toward the mudflat.

This second animal dove down and emerged with a mouthful of weeds, which it proceeded to devour at its leisure. At first, I thought it was a baby beaver and it reminded me a bit of a punk teenager with its spiky fur tufts on its head and body.

As I continued watching, I hoped to see the smaller rodent’s tail in order to confirm its identity, but I never did get to see it. I was able to observe the little animal’s eating habits, however, as it shoveled veggies into its mouth and then dove into the pond to emerge again with another armful of food. While the little mammal ate, the larger one took off. After almost an hour’s observation, I left the small animal to its meal. At home, I researched the distinguishing characteristics of aquatic mammals and finally concluded that I had been lucky enough to see not a parent-and-child beaver duo but rather a beaver and a muskrat sharing pond space around the middle of the day.

The beaver can weigh up to 70 pounds, while a full-grown muskrat will weigh only about 5 pounds at most. Also, the larger animal had protruding ears, while the smaller one’s ears lay flat — another feature distinguishing beavers from muskrats. So my initial guess that the little rodent was a baby beaver was wrong. But getting to see two animals that typically remain hidden from view when humans are around was a lovely surprise indeed. Do take a walk in one of our area’s natural areas if you can — you never know which animal might surprise you with an unexpected visit.

Insects Can Be Exciting!

Be the first to comment on "A Surprise at the Pond"