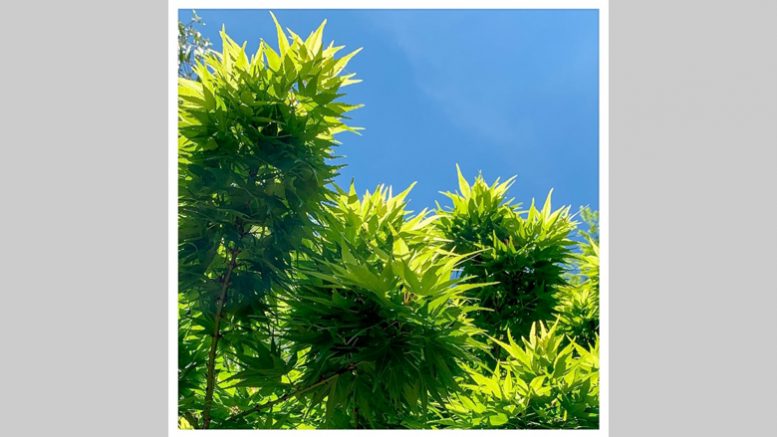 When I first saw the Japanese maple, Acer palmatum Mikawa yatsubusa, it literally stopped me in my tracks as I’d never seen anything like it. Now Japanese maples are commonly found everywhere, primarily for two reasons:

(1) They are lovely and have magnificent fall color; and (2) Because there is such variety among the many hundreds of cultivars, there really is a Japanese maple for everyone who lives in the gardening zones of 5-8.

What caused me to fawn over Mikawa yatsubusa were the placement of its leaves. The green serrated leaves were piled high on top of one another: leaf after leaf tumbled forth. It was also on the small side, promising to reach a maximum height of only six feet so I had the perfect spot for it in my crowded garden. An additional asset was that it already had an intriguing architectural shape, one I greatly admire in many Japanese maples.

Did I also mention that it was also very expensive?

I went home with images of Mikawa yatsubusa twirling through my head. Mind you, I had never heard of this cultivar until I chanced upon it in the nursery. I also had the price tag dangling over my head — did I really want to spend so much money on a shrub that might die?

I went back to the nursery five times, almost hoping that someone had bought it, thereby rescuing me from my dilemma. Each time it sat there in its pot, lonely, obviously searching for a permanent home (okay, I’m obviously anthropomorphizing here but you get the picture). Finally, overcome with lust, I bought it, telling myself that I would economize in other ways.

There is a problem endemic in buying an ultra-expensive plant: You have to make sure it lives, no easy task in the middle of a North Carolina summer. I picked a spot that received morning sun and some afternoon shade. Fortunately, I have good, well-draining soil but any young tree or shrub needs plenty of water to survive through our summers, which can be both hot and dry.

It was like adopting a new puppy. Did it have enough liquid refreshment? Was I giving it too much water or not enough? It simply sat as though it were pondering its future with me. It didn’t lose any leaves but it didn’t grow any either, primarily I suppose because it was concentrating on establishing a root system in a new environment.

The good news is that Mikawa (as I call it) is now ten years old. Its shape is amazing, the leaves still enchant me, and the late November fall color is awesome.

Japanese maples comprise a great species of the maple genus. Some are trees, some are shrubs and some, like Mikawa, fall under the “specimen” designation, meaning that they are unique, adding great accent qualities to the garden.

Some cultivars grow upright while some weep, some carry variegated leaves while others such as Mikawa sport green leaves and they come in a variety of sizes. Literally, there is a Japanese maple out there for everyone.

Now be sure to do a little research if you are pining away for a Japanese maple because there is a wide variety of choice. Leaf colors range from red to light green. There are even blond Japanese maples. One caveat: Some red-leafed cultivars do not hold their color well during our hot summers. Some will turn a bronze-green color during the summer before reverting to the red with the advent of cooler weather.

There is also a great assortment of leaf shapes to choose from. Some are deeply serrated whereas others are slightly serrated. Their fall colors are phenomenal but can vary from purple to orange with reds and yellows also available.

Size is also a consideration. Don’t plant a Japanese maple that will become a tree if you only have room for a shrub. Look at the form. Do you want an upright version, a weeping stance or an architectural statement?

Now that I have Mikawa, I feel this Japanese maple was worth every penny. And that’s what’s known as a successful adoption.

Beware of the Floozies