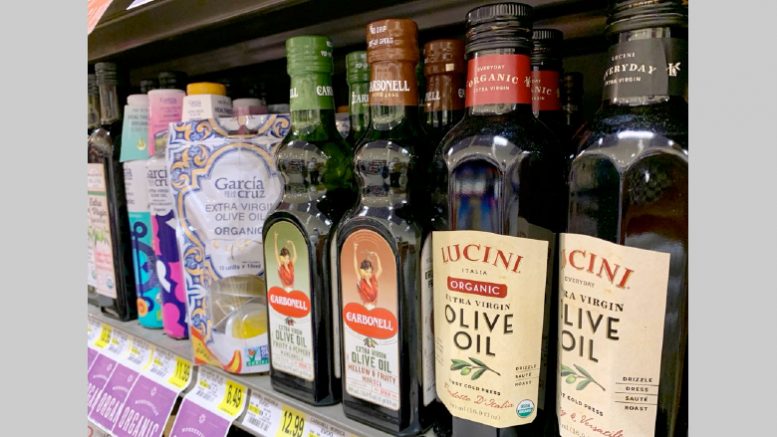 Lots of choices can be found at your grocery store. Photo by Lise Jenkins.

Long ago in the Dark Ages, the only olive oil found in upscale markets were ½ pint bottles, marked “virgin.” In the 1970s, this was daring stuff.

Gradually the “virgin” gave way to “extra virgin,” causing giggles at the time: How can there be anything more virginal than “virgin?” Today, because olive oil is so ubiquitous, it’s hard to find a store that doesn’t carry it — and we take the “extra virgin” designation quite seriously.

While we associate olive oil with the Mediterranean region, especially Italy, Spain and Greece, California is becoming an increasingly important producer. Because European olive oils are coming under increasingly heavy scrutiny, it’s befitting that we consider some of our native oils.

The problem with commercial European olive oils is that there is a lot of fraud occurring in its production, so much that the EU established an olive-oil task force. The sad truth is that there’s so much money involved in olive oil production that people have discovered how easy it is to doctor fake olive oil.

This doesn’t mean there aren’t good, honest growers. But they can be hard to find.

Forty percent of Italian olive oil comes from Puglia. However, these olive growers find themselves constantly underpriced by the larger companies selling bulk oil, much of which has been doctored to look and smell like olive oil. Not only is the government lax in pursuing some of these crimes, but officials are held responsible for their decisions; one wrong decision requires that official to pay out of pocket for damages. It also goes without saying that many of these companies have close governmental ties.

While Italy is the world’s largest exporter of olive oil, a bottle marked “product of Italy” does not mean the olives were Italian; they could easily be from Spain, Tunisia and Greece. It just means that the olive oil was processed in Italy.

The sad truth is that olive oil fraud is very old, stretching back to antiquity. By the first century CE, olives were an important cash crop with Roman emperors being careful to ensure their urban populations had easy access not only to grain but also to olive oil.

When the olives are changing from green to black, workers begin to pick the olives by hand. Just as different grapes produce different wines, the 700 olive cultivars generate different tasting oils. “Extra virgin” oil must be produced either by press or centrifuge and have a “free acidity” of no more than 0.8 percent. The riper the olives, the more acidity they produce.

Many of the California olive oils can be purchased online. Some websites let you order olive oil by the variety of olives, whereas others offer unfiltered “olio nuovo,” the very first fall pressing of the new crop of olives. It’s worth seeking these websites out as their offerings make lovely holiday presents.

The Rain is Plain, in my Garden

The Trades We Make

Be the first to comment on "A Tale of Olive Oil"