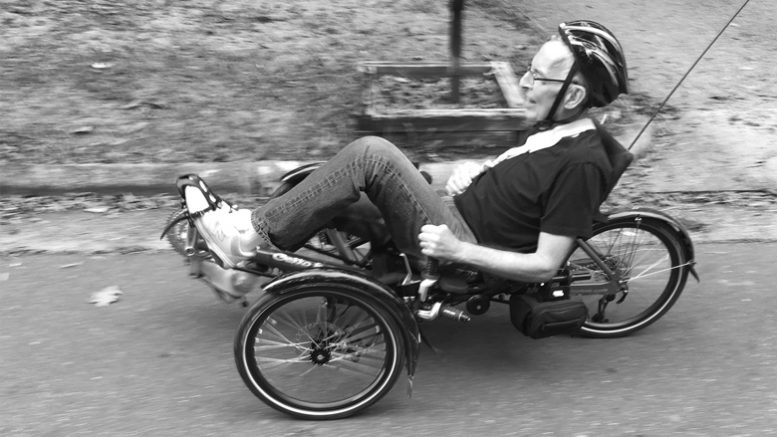 Perhaps you’ve seen him — this happy man zipping along the streets of Southern Village, his recumbent trike low and fast — a jaunty multi-colored pennant bobbing merrily in his windy wake.

If you’d been there to see him take a precarious corner at breakneck speed, you’d have thought you were watching a devil-may-care teenager flaunting death and danger, thrilling to the wind in his face, the smile that wreathed that face; a sight to behold.

And you could be forgiven for not noticing his entire right side was limp, useless, just along for the ride. No matter; his strong left leg pumping the pedal, his strong left arm and hand doing all the steering. Did I call him handicapped? No, I did not. And if you’d seen him biking, you wouldn’t either.

That’s because you would have been too busy responding to his boisterous infectious greeting: “bu-PAH!”

When the formerly loquacious biker’s brain had been decimated by the multiple strokes and brain cancer, his once formidable vocabulary shrank to “Outstanding!” and “Absolutely!” and “Yes!” All positives and always delivered at high decibel level with audible exclamation marks.

And “bu-PAH!” — the universal greeting he dispensed to each and every trailgoer, old acquaintance or first-timer.

John Angier Vernon, my brother-in-law and biking partner, who died last week at 69, didn’t just survive 30 years after being diagnosed with terminal brain cancer at 39 — he lived life so thoroughly and with such relish, it made him the North Star of his family.

The day after his death, the family gathered, as families will do, to tell stories, inevitably leading to antic moments in the life of the deceased — enabling the mourners to laugh in the face of grief. Here’s the best one they told at the impromptu memorial service.

John, around the age of 10, and the youngest of three, basked in the knowledge that he was the clear favorite of his mother, who nevertheless insisted that all her children belong to “The Clean Plate Club” at dinner. A not-clean plate resulted in detention in “the Penalty Box” (your room), a place John’s siblings knew all too well, but John himself rarely visited.

Mysteriously, and without exception, John’s plate always ended up shiny-bright. Until one evening, when the mother complained to her husband about how freezing cold it was in the kitchen, where the family ate.

Inspecting the heating system, the father started by checking to make sure the heating vent in that chilly room was actually working  — only to discover that the main vent situated directly behind where John sat at dinner was clogged solid with rotting food — peas and carrots and potatoes and bits of old meat that little John had been secretly stashing away down the vent each night for months.

Told and retold, the story still produced gales of fresh laughter. A healing balm if ever there was.

From selling Vaseline to CEO

Studying religion at Duke, he grew his dark curly hair shoulder-length, much to the dismay of his conservative businessman father; the family teased him with the nickname of “Tiny Tim.” Upon graduation, John announced that he wanted to go to Japan to study Eastern religion, but his father would have none of it. Get a job, he told his son.

John obeyed; his first job was selling Vaseline. Then he moved up a notch, selling boxes and pallets to farmers in rural Eastern North Carolina. Then a job as a manager at a hotel. That last one took. And by the end of this wildly successful career, he was part-owner of the hotel group.

He married his college sweetheart, Michele, and they raised two kids in D.C., moving to Chapel Hill several years ago to be near family and the medical facilities they realized he would soon require.

On his memorial website, his family posted the following:

“John was religious — not in spirituality as much — but in principles.  One great example is an infamous list of business philosophies, especially as it related to the hotel business, which he called ‘Running Things,’ which encapsulated his perspective on entrepreneurship and running a business. People who worked with John still keep tattered copies of Running Things in their offices, the evergreen advice still just as pertinent today as it was 20 years ago. Running Things can also be viewed as a great guide to life. At home we heard about them constantly at the dinner table, specifically #14.”

From the website’s obituary, the family writes:

“In July 1990, John had a seizure and was rushed to the hospital. At the young age of 39, he was diagnosed with an astrocytoma in his brain and given only a few years left to live. He had radiation treatment, which was the only option for him at that time. While it was a dire diagnosis, John forged ahead with a smile, cracking jokes along the way. His doctors credit his positive attitude as a key factor in his recovery and eventually his ability to live cancer-free for decades beyond their expectations. From 2006-2013, John had several strokes, due to previous radiation treatments weakening his brain, which began to chip away at his mobility and ability to communicate. Even when confronted with the indignities of his strokes’ effects, he insisted he was “outstanding,” his favorite phrase, and a tribute to his eternal optimism.”

I am sure one reason John Vernon lived so robustly is that he faced his own mortality as a young man and stared it down. As a result, the rest of his life was imbued with the daily awareness of his own impermanence.

In his final downhill run, John, relentlessly cheerful, endeared himself to all — caregivers, hospice workers, family members — never once complaining about his condition. What an honor it was to be his wingman.

For one who was drawn to Eastern religion and who lived with such a combination of stoicism and joy, a final benediction from the I Ching:

When the Way comes to an end,
then change —
having changed,
you pass through.

Humiliated in the Garage Olympics

2 Comments on "A Wingman’s Farewell"