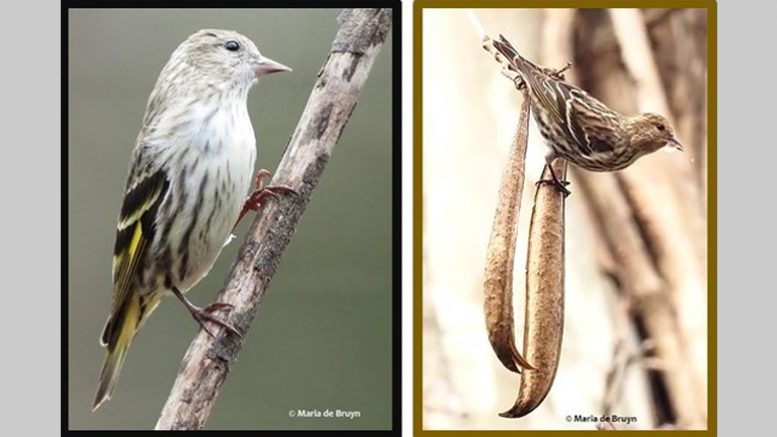 As mentioned in my last column, not only the evening grosbeaks came to North Carolina during this season’s migratory “irruption.” Other species include pine siskins and red crossbills.

The siskins arrived in my yard in late autumn. They came in a large crowd, with some 30 birds flocking to the feeders at a time. Most of these little brown and beige birds have a trace of yellow on their wings.

A small percentage of males are brighter, with yellow or yellow-green coloring on their backs, heads and under their tails. These so-called “green morphs” also have less streaking on their chests (photo above). Interestingly, whereas female birds of many species prefer brightly colored males as their mates, female siskins appear to choose males with less yellow to distinguish them.

The siskins are notable because they are quite a feisty bunch. They not only will challenge other bird species at feeders, such as cardinals and downy woodpeckers, but they also try to drive away their compatriots with whom they migrated.

They first will open their seed-filled mouths to “yell” at the incoming diners, then open their wings in a challenging display, sometimes even seeming to take food from another’s mouth! Finally, they will fly at their food rivals in an effort to drive them off. Why they are so proprietary is a bit of a mystery to me. Unlike other finches who have definite food preferences, pine siskins will eat from numerous sources: feeders, seeds of all types of trees, weeds, flowers and grasses, as well as insects and tree and flower buds.

Some local birders, who welcomed the siskins when they first appeared, are now complaining that the visitors are consuming too much seed so that their bird-food budgets need to be increased. I’ve been lucky in that the siskins in my yard have stopped coming in groups unless it is very cold, stormy or raining. They have been eating seeds in trees and on dried flower stalks as well as at my feeders.

A much more specialized diet is necessary for the red crossbills who came to North Carolina this winter. After several trips to game lands to get a view of these interesting birds, I only succeeding in spotting them once. On that occasion, it was an overcast and gloomy day, and they were very high up in a distant tree, so that I could hardly distinguish them from the pine cones. I did manage to get a few “acceptable” photos. The crossbills are quite unique with their unusual beaks that have an upper bill curving down over the lower bill. This morphological adaptation means that they can extract seeds from conifer cones that are still closed, which other finches cannot do. A good view of their beak can be seen on the All About Birds website: https://www.allaboutbirds.org/guide/Red_Crossbill/id

What also makes these finches very unusual is that there are at least six — and perhaps as many as eleven — sub-species who differ in the size and shape of their beaks and the type of calls they make. Each sub-species specializes in eating the seeds of one particular type of conifer tree!

The red crossbills are further unusual in that they can breed year-round (other birds mate and breed in the spring and summer). They likely will not be doing that here in North Carolina. While we are still dealing with winter temperatures and rainy days, spring is not too far off and the crossbills will be returning up north in the coming weeks.

It’s my hope that I’ll be able to see them again one day, and then perhaps a bit closer so that I can get some really good looks at them (and better photos). It’s always nice to have something to anticipate for the future.

One final note for those of you who have bird feeders: it’s been reported on neighborhood listservs that people are finding dead pine siskins in their yards. These birds have likely died of salmonellosis, a highly contagious disease that they can get from perching on feeders where infected birds were eating. If you find sick or dead birds in your yard, please take down your feeders for a couple weeks. Wearing gloves, clean the feeders (and bird baths) with a solution of 9 parts water to 1 part bleach before putting them out again. Also, remove the fallen seed under the feeders. Thanks!

And Now for Something a Little Different