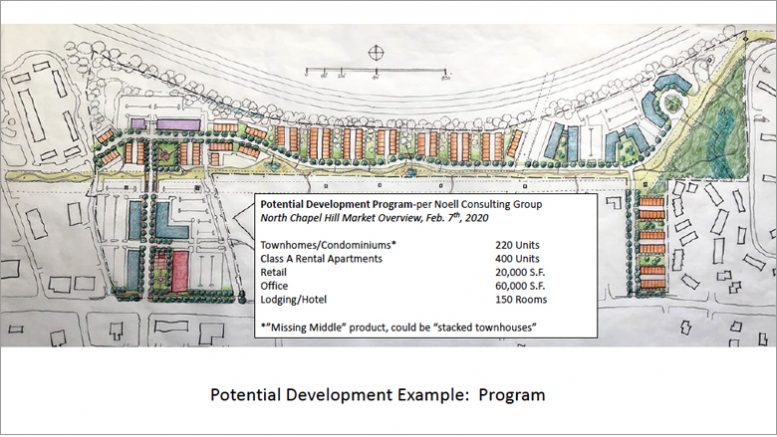 Will the Chapel Hill Town Council take a new approach to development in north Chapel Hill?

That’s the question town staff is posing to local elected officials. Brian Peterson, the town’s urban designer, has submitted a draft of a North Chapel Hill Master Plan that would up-zone a 55-acre parcel located between University Station Road and the Carol Woods retirement community. The recommendation was based on a consultant’s overview of north Chapel Hill (https://www.townofchapelhill.org/home/showdocument?id=45221).

Up-zoning is a method that would allow more dense use than the current multiple zones covering the area. It would permit more residential units and taller buildings than are allowed now. It also would allow commercial uses, including hotel, retail and office space, which are not permissible under current zoning.

The draft master plan recommendations include 620 residential units, a hotel, retail and office space. Affordable units are not a guarantee but are listed as “potential.” Surface parking would total 940 spots.

“What tools would be available to make sure that the finished product looks like the draft plan?” Town Council member Michael Parker asked Peterson at a recent Council on Economic Sustainability meeting. “Carraway Village’s original draft plan … looks nothing like what has come to be.”

At the meeting, council member Tai Huynh pushed for “affordable units … [to] be interspersed through the project instead of restricted to one area,” after Peterson noted that affordable units could be clustered together or intermingled throughout the development.

The majority of the site, which currently houses the Lakeview Mobile Home Park along Weaver Dairy Road, abuts I-40 and lies behind The Residences at Chapel Hill North, Vilcom and the Kensington Trace and Coventry developments ​and abuts Carol Woods.

Lakeview is home to 33 mobile homes and two duplexes. Town Manager Maurice Jones said mobile home residents have been made aware of the draft plan and are engaged in discussions about it.

The site was reviewed by the Northern Area Task Force in 2007 as part of a 435-acre Northern Chapel Hill study area (https://www.townofchapelhill.org/home/showdocument?id=1050). Environment, land use and intensity, pedestrian and bicycle mobility, transportation, design guidelines and gateway entrance recommendations were made.

The recommendations included restricting residential development from abutting then four lane I-40 due to noise and pollution concerns. The new draft plan does not follow this guideline and I-40 is now scheduled to be widened to six lanes which will increase noise and pollution.

Both of these concept plans became inactive after their initial review.

“The draft plan should come back to council at some point when in-person public comment can be incorporated,” Mayor Pam Hemminger said.

Del Snow was chair of the Northern Area Task Force in 2007.

1 Comment on "A Zoning Change for Northern Chapel Hill?"