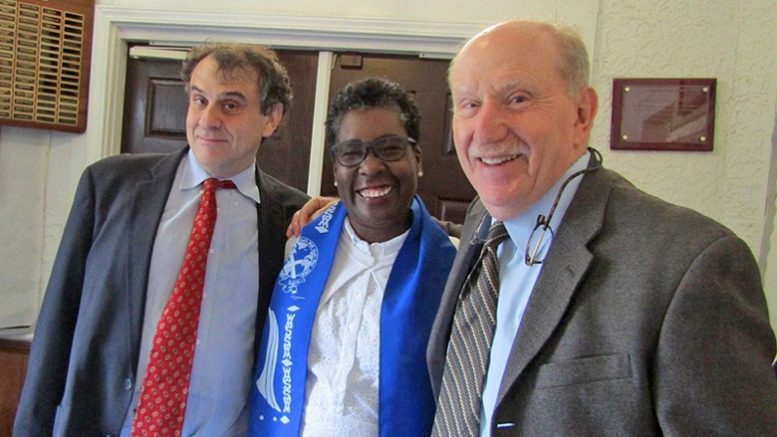 Ken Broun, right, with his son Jonathan E. Broun and wife, Joal, who is a member of the Chapel Hill/Carrboro School Board.

One of my favorite things about living in a college town is that you never know who you’re going to run into at the grocery store or local coffee joint – when we used to go to coffee joints, that is. It could be a Pulitzer Prize winner, a Nobel Peace Prize recipient, or a bestselling novelist. You might even run into someone whose vein of bravery took him to South Africa during apartheid to work with black lawyers. That’s Chapel Hill resident Ken Broun.

Throughout his more than half-century legal career, Ken Broun has worked to make the world a better place. From his 20-year stint at the University North Carolina Chapel Hill Law School, where he was dean from 1979 to 1988, to the town of Chapel Hill itself, where he was mayor from 1991 to 1995. He has taught generations of law students and has contributed to scholarship and case law with his book Brandis & Broun on North Carolina Evidence. This book has become the official chronicler of what North Carolina law means and is cited frequently in legal arguments.

His work in South Africa is of special note. Broun was invited to teach trial advocacy — one of his specialties — to black lawyers there, who sorely needed such training. What began in 1986 as a one-time visit became annual sessions for over 25 years. “Our idea was to train enough teachers to work ourselves out of a job,” Broun said. “We didn’t accomplish that.”

The number of lawyers seeking the training continued to grow. Apartheid in South Africa and the Emergence of a Movement

After the creation of the apartheid system in 1948, Indian and Black South Africans experienced countless hardships. Segregation laws were designed to isolate the population, decrease black urbanization, and assign migrant labor and cheap work to non-white South Africans.

One of many leaders who rose to prominence during apartheids’ reign was Nelson Mandela.

In Saving Nelson Mandela, Broun recreates Mandela’s trial, called the “Rivonia” Trial after the Johannesburg suburb where he was seized by police. The trial unfolds through a dramatic narrative that captures the courage of the accused and their defense team, as well as the personal prejudices that colored the entire trial.

Mandela’s eventual release, 27 years later, was instrumental in moving his country from the racial tyranny of apartheid toward democracy. As documented in Ken’s book, the Rivonia trial was a critical milestone that helped chart the end of apartheid and the future of a new South Africa.

In light of what is happening today in America, I asked Ken Broun if the problems we’re facing today could be solved using Mandela’s 60-year-old resolve? And if yes, what should the emerging “Mandelas” be doing differently?

“Mandela was an example of timing,” Broun said. “He was the right person with the right resolve and commitment at the right time. He had that unique combination of strength, bravery and empathy, the depth and the breadth of politics. I think of Churchill and Barack Obama. They were change agents of history who might not get elected at a different time.”

Broun continued: “I often think of 1996 in South Africa listening to a right wing talk show, encouraging callers to express their opinion of Mandela. This one guy called in and, in all seriousness, asked if Mandela could be frozen, cryogenically, because he knew we were going to need him again in 30 years. I remember thinking what a crazy statement that was and now I chuckle how spot-on the caller was. Here we are, nearly 30 hears later, and we need Mandela’s resolve.” That project, The Chapel Hill Nine, commemorates civil rights demonstrators who were refused service at the Colonial Drug Store in Chapel Hill. Now they have an honorary marker on Franklin Street outside the West End Wine Bar. At the unveiling, Broun said: “Chapel Hill is a better place because of what The Chapel Hill Nine did. Their courage and the example they set is a lesson to all of us: we can learn from and follow the young and the courageous.”

As one of his former colleagues noted: “Not everyone who spends a life in academia comes out of it with such a largely positive view of the world.” Regardless of the challenges life places in his path, Broun moves through them with strength and grace, and a personality that feels like a warm embrace – the kind he might give you if you ran into him, completely by chance, at a coffee shop.

Be the first to comment on "About Ken Broun"