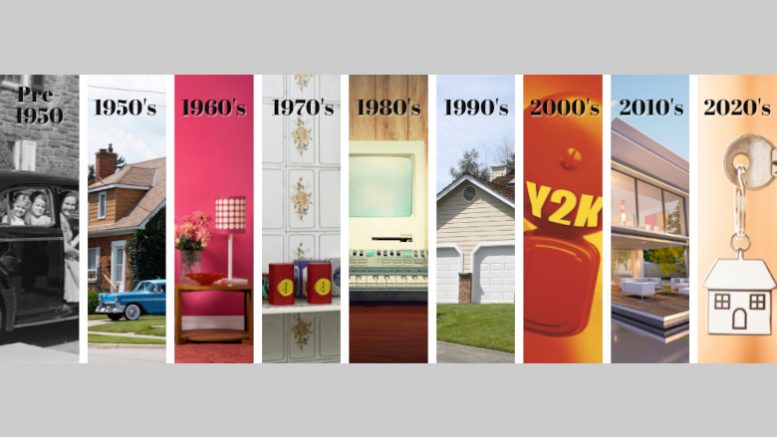 “Aren’t all the old homes going to be too small for us?” This was a question I received from a recent client who is moving to Chapel Hill from out of state. As we explored her inquiry, I realized she had a whole host of assumptions about homes based on their ages. This is understandable, given that trends in home design fluctuate.

Being data curious, I decided to do some research in the Multiple Listing Service (MLS) to explore similarities and differences between sold homes, broken out by the build date of the home. What follows is a decade-by-decade analysis of all the detached homes that have sold so far in 2021 in the ZIP codes of 27510, 27514, 27516, 27517, and 27707 within the boundaries of Orange County. All data here were taken from the Triangle MLS and are considered reliable, but not guaranteed. Additionally, all data, except year built, have been rounded to simplify analysis.

First, I found that a total of 646 detached homes have sold this year in Southern Orange County. The table below shows how the sales were distributed across build dates. For simplicity, I have clustered all the homes built before 1950 into one category.

As you can see, the numbers steadily rise until the 2000s, when they decline again. Understandably, there are numerous factors at play with this distribution, including total volume of houses built in any given decade, the likelihood of a home coming into the market and simple chance (since we are only analyzing homes sold this year, not all homes built). It would be logical that homes built in the 2010s may sell at lower volume today, since owners tend to stay in homes for 7-10 years on average before selling. And, of course, we are only two years into the 2020s, so clearly those numbers should be lower.

I then wanted to see whether some of my client’s stereotypes held true: are the old homes small and the new homes large? The table below looks at dwelling and lot size of the sold homes by decade.

Although my client’s concern about older homes being “smaller” was technically accurate, I think it is fair to argue that homes that are larger than 2,000 square feet should not be considered “small” per se. Indeed, in no decade was the average home size smaller than 2,033 square feet.

The general trend across the square footage data indicates an increase in home size over the decades. The square feet average for the decades before the 1980s is 2,224, whereas it is 3,482 for the decades since the 1980s, for a difference of 1,258 square feet. Regarding lot size, there is a negligible difference between the earlier-built properties, which average 1.16 acres, and the later-built properties, which have lots averaging 1.1 acres

Although there is randomness in the data, there is a general increase across both room types from the oldest homes to the newest homes.

Since dwelling and lot size, along with bedroom and bathroom counts, tend to be among the largest factors determining home pricing (along with condition, which was not analyzed here), I was then curious how sales prices varied by build date. The average sale price across all homes was $644,471, and I wanted to examine the decades for consistency against that average. The results are shown in the table below, along with a row indicating whether the average for that year is above or below the average among all homes.

The oldest property was, to my surprise, also the most expensive: a 34-acre property with a dwelling built in 1854 sold for $2.7 million.

Gary A. Miller is co-owner of Red Bloom Realty. He has lived and worked in Chapel Hill off and on since 1994 and is an avid musician, kayaker, traveler, and former educator.

Price Reductions and Financial Considerations in a Red-Hot Market

Be the first to comment on "Across the Decades: Comparing Sold Homes by Build Date"