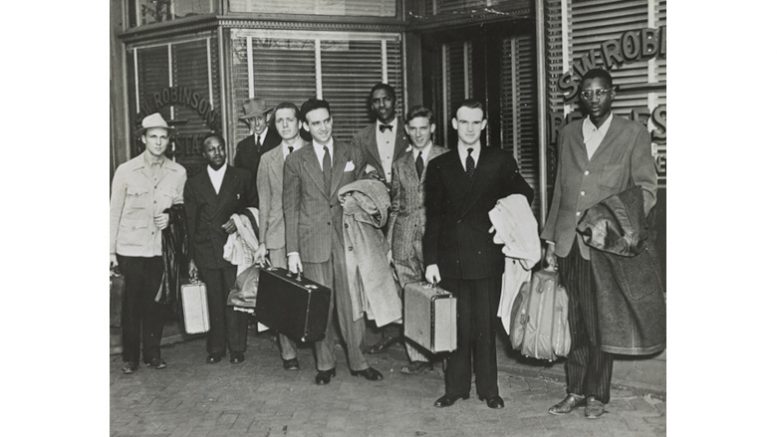 A 75-year-old journey toward justice ended on Friday, June 17, in the Hillsborough courtroom where it all began. Superior Court Judge Allen Baddour vacated the convictions of four Freedom Riders — Bayard Rustin, Igal Roodenko, Joseph A. Felmet, and  Andrew Johnson — three of whom were wrongfully convicted of disorderly conduct in 1947 and sentenced to hard labor.

The history-making move was officially recorded on June 17 in a special court session of the Orange County Superior Court. Judge Baddour’s orders state the men had been convicted under a state statute that violates the U.S. Constitution.

Judge Baddour ruled that the state statutes “violated the Fourteenth Amendment of the United States Constitution and Article I, Section19, of the North Carolina State Constitution, by failing to provide equal protection under the law.”

More than 100 spectators, including family members of the Freedom Riders, Orange County elected officials and concerned citizens crowded into the courtroom last Friday to witness Judge Baddour’s issuing a motion for appropriate relief, which dismissed all charges against Roodenko — a Jewish activist; Joseph A. Felmet; Andrew Johnson — Felmet’s Black seatmate, and Bayard Rustin, the trailblazing civil rights leader credited with organizing the 1963 March on Washington.

The Congress of Racial Equality, composed of eight Black men and eight white men, created the concept of a “freedom ride” that inspired Rosa Parks and would be replicated throughout the 1960s. Rustin, Roodenko, Felmet and Johnson were part of the  “Journey of Reconciliation,” that passed through North Carolina in 1947.

The Chapel Hill arrests in 1947

On April 13, 1947, the incident began at a bus station in Chapel Hill, where the first freedom interracial civil rights activists had arrived the day before without incident. This group of 16 men — eight white and eight black — were part of a Journey of Reconciliation organized to test a Supreme Court ruling that segregation on interstate travel was unconstitutional. The two-week trip that began in Washington D.C. had an itinerary to travel through the upper South, stopping in Durham, Chapel Hill, and Greensboro.

When the group arrived in Chapel Hill on April 12, they were greeted by Reverend Charles M. Jones and members of his congregation. In 1947, Chapel Hill was still a segregated town, not unlike most cities in the South — meaning public spaces, eateries, and neighborhoods had prejudicial ordinances restricting blacks.

On the buses, only whites could ride in the front. On April 13, 1947, four bus riders — Andrew Johnson, James Felmet, Igal Roodenko, and Bayard Rustin — took front seats on a bus bound for Greensboro. They were deliberately sitting together in interracial pairs despite local segregation laws. The group was arrested numerous times during the two-week trip, but Chapel Hill was the only place where they encountered violence.

The bus driver refused to transport them. As Johnson, Flemet, Roodenko, and Johnson were being arrested for disorderly conduct for refusing to move to the back of the bus by Chapel Hill police, an angry mob of white Chapel Hill cab drivers attacked them.

Bond was posted, but fear existed for their safety and that of Rev. Jones because of local threats to them and his family. They escaped by car to Greensboro. They later turned themselves in and faced trial in Hillsborough, where all but Johnson, who paid the fine, were convicted and sentenced to 22 days in segregated chain gangs.

The path to justice

Renée Price, chair of the Orange County Board of Commissioners, had the idea to “correct the narrative regarding the Journey of Reconciliation and that segment of American history,” as she stated in her remarks after the motion for appropriate relief was granted on June 17.

“How did we arrive at this special court session?” Price, who is the Democratic nominee for the N.C. House District 50 seat, asked rhetorically. “Judge Allen Baddour handled the legal research and proposed a form of legal redress that would result in justice without erasing history. We concurred that a motion for appropriate relief for each of the wrongfully convicted civil rights activists would be the course of action.”

“The Orange County Court in May 1947 was on the wrong side of history,” Judge Baddour said in his statement. “Today we stand before our community on behalf of all five district court judges for Orange and Chatham counties and accept the responsibility entrusted to us to do our part to eliminate racial disparities in our judicial system.”

“We are here 75 years later to address an injustice, and henceforth correct the narrative regarding the Journey of Reconciliation and that segment of American history,” Price added.

Chris Blue, Chief of Police in Chapel Hill, spoke to the group and brought many to tears,

“I am honored and humbled to be here with you today for this important proceeding,” Blue told those in attendance.

“I grew up in Chapel Hill and, like others with strong ties to our community,” he said. “I have always taken pride in the many things that we cherish in the southern part of heaven —Carolina sports, home to the nation’s first public university, Mama Dip‘s, Franklin Street —the list goes on.”

“But, I also know that our history hasn’t always been something of which we should be proud,” Chief Blue continued. “Despite my strong local roots, I never learned about the Journey of Reconciliation and the treatment of the freedom riders when I was a kid growing up here.  I didn’t learn about how they inspired a movement….I wasn’t taught about the Chapel Hill Nine either.”

“Now, in my role as a community leader and police chief, I realize more than ever how important it is for our community to acknowledge, confront, and condemn those dark moments in our community’s history, and to learn from them as we strive to be a place for everyone,” Chief Blue added. “As I’ve read about the Chapel Hill Police Department’s role in the arrests of these four courageous men, I could only imagine the fear that they must have felt as an angry mob grew around them and they were pulled off that bus by officers who were sworn to protect and serve everyone who found their way to our community.”

Chief Blue offered an official apology on behalf of the Chapel Hill Police Department and a “sincere apology”to the Rustin, Roodenko, Felmet and Johnson and their families.

Amy Zowniriw, Igal Roodenko’s niece, told The Local Reporter, “As I said in my speech if only my uncle could have faced the group of people that I saw that day — welcoming and warm from the judge to the district attorney, to Renee Price from the Orange County Commissioners, to Chapel Hill Police Chief Chris Blue — it’s been overwhelmingly supportive.

“By contrast, my uncle was surrounded by hate and a racist judge who tried to impose a 90-day sentence more than the 30 maximum days allowed,” Zowniriw added.

In Zowniriw’s mind, Igal Roodenko wasn’t only a civil rights activist and pacifist, he was a cherished uncle who called her “little Amy,” and would tell wonderful stories about his world travels. Roodenko had been a printer and had his own shop in New York City.

“It was Gandhi’s dramatic acts of civil disobedience, at least in part, inspired the Journey of Reconciliation and the rest of his life,” Zowniriw said.

Roodenko, according to his niece, had been very active in anti-Hitler activities before WWII, but did not believe in conscription, so he ended up in federal prison for 20 months.

Roodenkobecame involved with the War Registers League (WRL) and devoted the rest of his life to the pacifist organization, Zowniriw said.

She treasures the memories of hearing from him as he traveled around the country and the world speaking about peace and justice and pacifism. Roodenko never stayed in hotels as he spoke in schools, universities, houses of worship, conferences and rallies, Zowniriw said. He typically stayed in people’s homes where he gained close friendships.

“In 1966, my Uncle was on a speaking tour, and he sent me a postcard from every country he traveled to,” Zowniriw recalled “I still have all of the postcards. He wrote: ‘In Leningrad and here…picture in the paper,’ not mentioning he had been arrested.”

“From Warsaw, he writes, ‘I leave for Berlin…cry very hard,’” Zowniriw said “In 1982 and 1988 he addressed his postcards to my children. A postcard from Prague in 1988 really illustrates who my Uncle was. He wrote, ‘Dear grandnieces —a happier world.’”

Zowniriw said her attendance at the June 17 special session at the Hillsborough courthouse marked her first visit to the South, and she was a bit apprehensive, especially of the police.

“My Uncle told me you change the world one person at a time — Chief Blue did that for me in his speech,” Zowniriw said. “He looked right at me and was genuinely compassionate and sorry for the mistakes of police in the past. He changed me.”

“I will never have that negative gut feeling about a policeman again,” Zowniriw added

Ultimately, Zowniriw expressed hope the events of June 17 will serve as an example for other injustices to be righted.

“Orange County led the way as a leader in doing the right thing to correct an injustice,” she said. Be the first to comment on "After 75 Years, Freedom Riders Vindicated in Orange County"