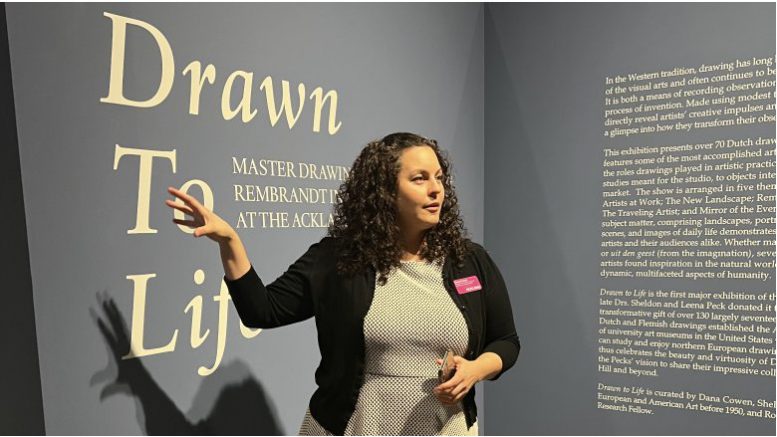 Dana Cowen, Ph.D., the Sheldon Peck Curator for European and American Art before 1950 at Ackland Art Museum, gives insight to the significance of the art pieces to be seen during a tour of “Drawn to Life: Master Drawings From the Age of Rembrandt.” Photo by Michelle Cassell.

Ackland Art Museum’s current exhibit “Drawn to Life: Master Drawings From the Age of Rembrandt” will soon place the University of North Carolina’s (UNC) public art museum in Chapel Hill on the international art scene map. When the extremely rare drawings travel to The Rembrandt House Museum in Amsterdam in March, it will become the first exhibit entirely owned by the Ackland to be displayed internationally in the 21st century.

This selection of 17th-century Dutch and Flemish drawings by the most renowned artist of the period, Rembrandt van Rijn, and his pupils is the most extensive display ever shown of the Dutch drawings in the Peck Collection since its donation by Drs. Sheldon and Leena Peck in 2017.

Not only is this a unique chance to view 74 of the intricate art pieces; it is also an opportunity to view many drawings by Rembrandt and his students that were never before exhibited. The collection is on view through Dec. 31, 2022.

Drawn to Life: Master Drawings From the Age of Rembrandt compiles an inside look at Dutch life in the 17th century. People living life doing ordinary things, together with landscapes and portraits by Dutch artists, convey a detailed look at aspects of human character in the era and the natural beauty they experienced.

Dana Cowen, Ph.D., is the Sheldon Peck Curator for European and American Art before 1950, in charge of creating the exhibit and the team that prepares and rotates the drawings. Cowen and staff prepared the exhibit around five themes: Artists at Work; The Traveling Artist; The New Landscape; Mirror of the Everyday; and Rembrandt and His Followers.

“There are no immediate plans to take the collection to any other city after Amsterdam,” said Cowen. The Drawn to Life exhibit will return to the Ackland in Chapel Hill, North Carolina, when the Dutch display is finished.

The Peck Collection is also detailed in a catalogue to accompany the exhibit, researched and written by Ackland Peck Research Fellow Robert Fucci, Ph.D., and published by Paul Holbert Publishing. It is an in-depth description of the Peck Collection. Fucci is also the co-curator of the exhibition.

It was the Pecks’ wish that their collection be made available for all to see even if they could not get to a museum. To fulfill that desire, the museum has created a website that will be constantly updated with current information and superior viewing capacity to enhance the study and enjoyment of the artwork.

A 40-year quest of scholarly sleuthing

Sheldon Peck said in his talk at UNC in May 2017, “The Art and Science of Collecting the Old Masters,” that he and his brother, Dr. Harvey Peck, wanted to collect art that required scholarly research and a lot of “detective work.”

In a time before the internet, they researched books and records 300 to 400 years old. They traveled extensively and acquired these drawings that were often preliminary sketches for larger works of oil paintings.

“What we found were that these artists had a supreme intellect and the powers of observation of nature to put it on paper—which cannot be repeated even by the best artists of today,” he said in his presentation. The brothers were both orthodontists in practice together when they began collecting Old Dutch and Flemish Masters drawings in the ’70s. After Harvey died in 1981, Sheldon Peck’s Finnish wife, Leena Peck, joined his orthodontic practice and shared his interest in pursuing the collection. Her passion matched her husband’s for the punctilious work and scientific and academic pursuit of finding 17th- to 18th-century Dutch and Flemish drawings.

In the video of his 2017 presentation, Sheldon Peck explained to the UNC audience what is involved in the very complex process of determining the origin of a drawing or painting.

“Sometimes something like counting the rings on a tree in a drawing can determine the age of it,” he said.

“I think the Dutch period, in particular, was appealing to Sheldon because it had so much to do with everyday life. It had to do with the things you see around you, how life is experienced,” said Cowen. “It was after taking a class at Harvard from Dr. Konrad Oberhuber, an influential art historian, that Sheldon became intrigued with Rembrandt’s drawings,” she said.

The Dutch artists flourished during this time period, because, according to the video, the Dutch were prospering from their “Golden Age” in the 16th and early 17th centuries. They became a maritime empire during the 17th century.

“That enabled artists to sell their work to citizens that were prospering from the economy. Even a farmer could afford to buy drawings and did so,” Peck said.

Prior to their deaths—hers in 2019 and his in 2021—Sheldon and Leena Peck were able to pass on not only the art collection to the public and to academics, but also the valuable knowledge gained from the process.

“Many can draw beautiful pictures,” said Sheldon Peck, as quoted in his obituary, “But only Rembrandt could render a line with such drama and dead-on accuracy.”

With all of Sheldon Peck’s remarkable accomplishments as a dentist, orthodontist, scientist, and educator, his obituary portrays his artistic passion as foremost in his life.

“The naturalistic view of the world that the 17th century Dutch period reflects had to do with everyday life that was very appealing to Sheldon,” said Cowen. “It is not fantasy and a made-up world; it is actually what you see—it’s unpretentious.”

A challenge to the exhibition is exposure to light. “The drawings are very light sensitive and we want to prevent any fading of the media or degradation to the paper,” explained Cowen. “We are using up a lot of light exposure time for these, so they will have to rest after they return from Amsterdam.”

Typically there is a protocol for how many drawings can be on display per decade so that 100 years from now, people can enjoy them.

“The attribution of the Peck Collection put us among some of the top museums in the country as leading centers of collection of Northern European drawings and works on paper,” said Cowen. This made UNC the first public university in the country to own a collection of Rembrandt drawings.

With this distinction, the Ackland Art Museum now stands with famous museums like The Met, the National Gallery of Art,  Harvard Art Museums and The Morgan Library & Museum. The donation also established Ackland as one of a few university art museums where scholars and students can do an in-depth study of northern European drawings.

The Peck Collection was valued at $17 million in 2017 for the 134 drawings, according to Cowen. In addition, the donation came with another $8 million to fund the curator position, future acquisitions, and anything related to the collection, bringing the value of the Pecks’ gift to $25 million.

ECHHS junior a finalist for Genes in Space Contest