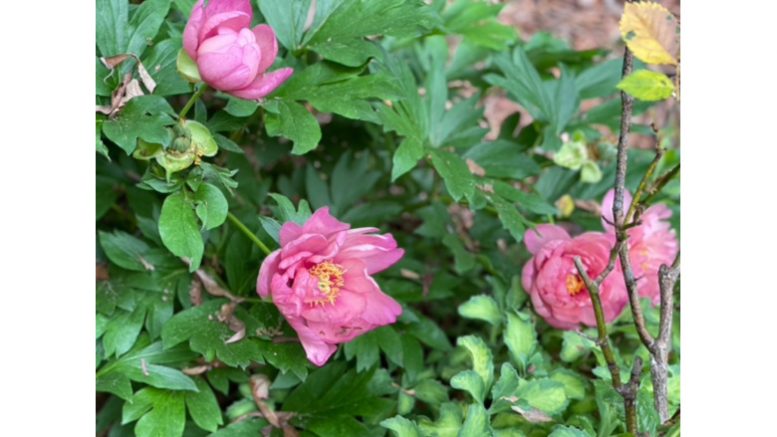 Quick: Can you name the one plant we have in our garden that may have come from our coldest state, Alaska? If you guessed the peony, you are correct.

We are just ending the peony season here in the Triangle, a short but glorious season. For a long time, I avoided planting peonies because I couldn’t stand the “I-just-had-a-baby” appearance the herbaceous peony takes on after flowering. Then about six years ago, I planted Paeonia ostii, a species tree peony that I had acquired from Nancy Goodwin’s Montrose garden.

I then proceeded to forget about it until several years later it suddenly put forth large white blooms at the end of March, a time when we’re all hungering for garden flowers. Because it continued to look downright perky throughout the rest of the growing season, I began to look at the Paeonia genus with new eyes.

It turns out that this is a rather complicated genus as there is general disagreement on how many species peonies – those peonies that arose on their own – actually exist. Estimates fall between 22-40, with many horticulturalists settling arbitrarily for 33. Today, there are over 3,000 cultivars, which I’m sure you will agree is a lot of peonies.

Originating in cold climates, peonies are native to the Northern Hemisphere in an area extending from the Moroccan Atlas Mountains to Japan, via Siberia and Kazakhstan. Unsurprisingly, therefore, they require a cold spell if they are to flower. Fortunately, here in the Triangle, we receive enough cold days during winter to enable peonies to grow in our gardens.

Peonies have been with us for a long time. Pliny the Elder tells us that the Greeks named the plant after Paeon, the doctor of the gods, which perhaps explains why Europeans used the seeds as a spice. The Chinese used the roots for their anti-inflammatory qualities while Homer and Shakespeare both mentioned the peony in their writings. When trade opened between Europe and China in the 17th century, hybridization between the Chinese species P. lactiflora and the European P. officinalis took off.

There are three different types of peonies: herbaceous, tree and Itoh (Intersectional). All bear large flowers although they differ in form considerably. The largest group, the herbaceous peonies will die back to the ground with the first frost as will the Itoh peonies. The tree peony is considerably larger, becoming woody in texture. All can interbreed with one another; all are slow-growing but can live over a century if happy.

Tree peonies, except for the species peony P. ostii, typically do not fare well here in the Triangle, primarily due to our hot, humid summers. Because growing peonies from seed takes too long, root division has become the preferred method of propagation. Even with root division, it typically takes 2-5 years before blooms will appear. Due to their cold requirement, all peonies grown for horticultural purposes must be grown in the field. Treat tree peonies differently from the other two types as basically they are shrubs with wood. Because they bloom on old wood, do not cut them back; with the herbaceous and Itoh peonies, you may cut them back as they bloom on new growth. If the peony has wood, don’t cut it back – it really is that simple.

Developed by a Japanese hybridizer named Itoh, they are relatively new on the market, making them rather expensive. Because peonies grow slowly, the horticultural industry has needed time to bring Itoh peonies to the market.

All peonies require well-draining soil. Herbaceous and Itoh peonies want sun, whereas P. ostii appreciates some protection from the afternoon sun. While they are relatively drought resistant, do give them regular water during their first growing season.

If you have to move a peony, do so in the fall before the cold weather has settled in, thus enabling their roots to grow during winter. Prepare yourself for a good sulk if you do move them as peonies lack a sense of humor when moved.

Peonies are not good candidates for pots as they want to expand their roots, extending frequently as much as 4 feet. For more information, there are two excellent resources: www.americanpeonysociety.org and Cricket Hill Garden at www.treepeony.com.

Addendum: One of my Itoh peonies disappeared at the end of July. I cut back the dying leaves, thinking that I had probably lost it due to the heat of the summer. In March, it made a reappearance and bloomed beautifully. If this should happen to one of your specimens, don’t despair. My other two Itoh peonies made it to the first frost.

Be the first to comment on "Alaska’s Great Horticultural Export"