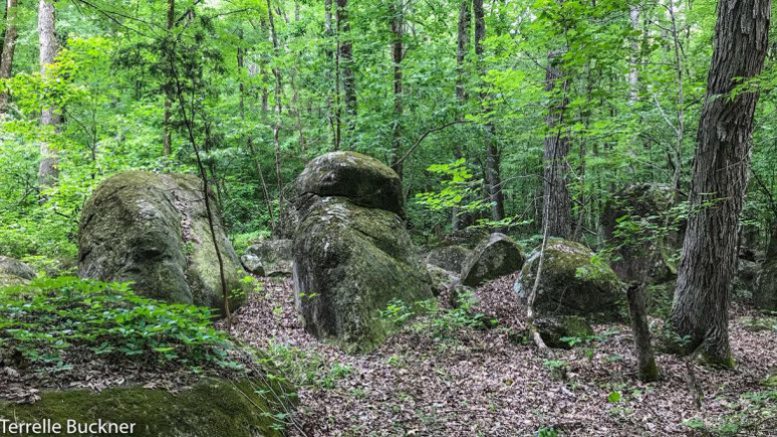 A public hearing set for September will help determine whether part of one of Carrboro’s most environmentally sensitive and ecologically endangered areas sees residential and commercial development.

The area is Meadow Flats, an upland depression swamp covering land owned by Duke Forest and several private land owners off Eubanks Road and Old NC 86. Upland depression swamps are ecosystems that hold water in shallow depressions during the wettest times of the year. Because the pools are so shallow, they don’t support fish, which allows amphibians, such as salamanders and crayfish, to thrive.

The N.C. Wildlife Resources Commission 2015 Action Plan notes that “isolated, ephemeral wetlands are regarded as one of the most endangered, and simultaneously one of the most biologically productive habitats in North America,” and that protecting any unprotected examples — such as portions of Meadow Flats — is critically needed.

The property company Parker Louis LLC owns a segment of Meadow Flats that’s included in a 30-acre tract close to the Eubanks and 86 intersection; the rest is part of Duke Forest, and is protected as a Natural Heritage site through the NC Natural Heritage Program.

Parker Louis’ area, however, is not similarly protected. A natural heritage designation is only considered when a landowner requests an assessment, and it was never requested for this private property. The land consequently can be subject to development.

The company now wants to build single-family homes, apartments and commercial buildings on the site, including a section of Meadow Flats. It has asked the town of Carrboro for a rezoning to the town’s flexible zoning district, created in 2016 for large sites on major transportation corridors that have had a public planning process. It would be the first time the flexible zoning district, which would allow for development, has been used.

In 1998, nearly 10 years before Parker Louis acquired the property, Orange County and Carrboro adopted a small area plan to determine how growth should occur in the town’s Northern Study Area.  The goal of the public planning process was to produce a policy document “in keeping with the needs and desires of the Town of Carrboro, Citizens of Carrboro and the Residents of the unincorporated areas.” One specific requirement of the planning process was to address the “conservation of farmland, natural areas and environmentally sensitive areas.”

In 2011, as part of the implementation of the small area plan, Carrboro contracted with Durham Area Designers to conduct design charettes on how development could occur on those Parker Louis lands. The five design layouts, produced by local citizens, including the developers, left the Meadow Flats portion of the tract undeveloped in accordance with the Small Area Plan.

But a flexible zoning district, according to the town, would “establish detailed standards for alternative possibilities for the development of a specific tract of land, thereby facilitating the development of that property according to the demands of the market, but in a way that is consistent with sound planning and the promotion of the public health, safety, and welfare.”

In letters sent to the Orange County Board of County Commissioners and the Aldermen, scientists from the Environmental Protection Agency, UNC, Duke and others who are conducting research within the Duke Forest portion of the swamp said the Parker Louis development would compromise their work in the area. They noted that the U.S. Department of Energy maintains an easement there in order “to protect the integrity of the scientific experiments being conducted” and “to preclude uses which would be incompatible with, and detrimental to, the research.”

Concerns have been expressed about the edge effects of development, such as intrusion of noise, polluted waters and invasive plants, into the heart of the swamp where scientific research has been conducted since 1941.

In April, when the Aldermen received a draft of the flex district contract with Parker Louis, along with a request for those tracts to be voluntarily annexed, a number of local citizens reminded the board that Meadow Flats is a nationally recognized natural heritage site and that development on it would severely damage the ecosystem.

The Aldermen directed staff to incorporate public comment and relevant ecological data into the next draft of the FLX ordinance that will be reviewed on Sept. 25.  A public hearing on the annexation, originally scheduled for June, also has been rescheduled for that date.

Letter to CEO of Bank on Government Attitudes

3 Comments on "Aldermen to Decide Future of Natural Heritage Site"