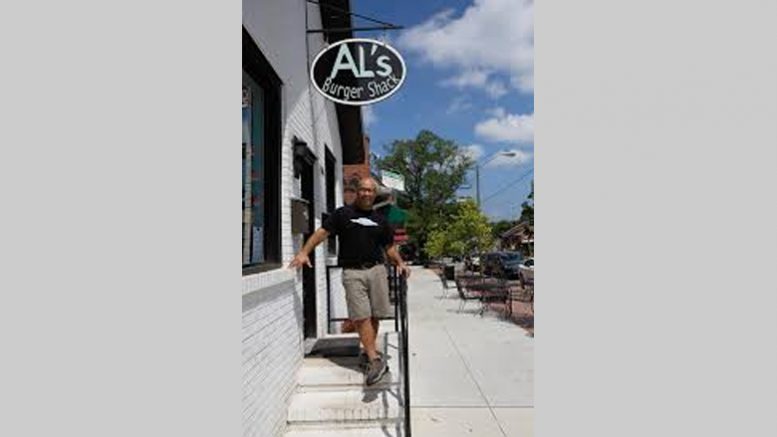 UPDATE: The Orange County Rape Crisis Center issued the following statement: “On January 10, 2020, the OCRCC was alerted that public accusations of sexual harassment had been made against Al Bowers, local business owner and business sponsor of the Orange County Rape Crisis Center. While we do not typically comment publicly on local cases, our affiliation with the accused compels us to do so. … We recognize that our public association with Mr. Bowers compromises our ability to be a safe space for all, and for this reason we have decided to cut ties with Mr. Bowers and his businesses.”

Al’s Burger Shack, which has become a Chapel Hill institution and developed a national reputation in just six years, has filed for bankruptcy reorganization at all three of its locations.

Established in 2013 by locals Al and Melody Bowers, the business was in the midst of ongoing expansion, including the recent announcement that Al’s would be joining the Durham location of Beer Study, at the time of the bankruptcy filing.

Named Food and Wine and Trip Advisor’s Best Burger in America, Al’s, which has locations on Chapel Hill’s Franklin Street and at Southern Village and Governor’s Village, filed separate Chapter 11 bankruptcy petitions for each restaurant. The Franklin Street location, referred to as AJEM Hospitality in the filing, lists assets of less than $50,000 on liabilities ranging between $500,000 and $1 million.

The biggest creditors appear tied to the entity behind the Franklin Street location, from nearly $250,000 listed as owed to the Internal Revenue Service as “payroll taxes,” to a disputed debt to Joe Nanney Meynardie & Nanney, PLLC for $105,000 in physical assets like equipment and furnishings.

The other two locations, filed as Southern Village Shack and Governors Club Shack, list the same assets to liabilities range. And all three are signed by company manager Al Bowers and filed by the same attorney, Chapel Hill’s John Paul H. Cournoyer of Northen Blue LLP.

“While sales are strong at all three locations, we overextended during expansion and need protection and relief while we reorganize,” Bowers said via a press release.

“We appreciate your support and patronage and will need to keep public comments on these proceedings to a minimum. As grateful as we were to have received accolades in recent years, we are even more so to have been afforded this opportunity to regroup. Rest assured we have absolutely no plans to stop slinging burgers and hope to see you at Al’s soon.”

Some Chapel Hill restaurant-goers were stunned at the news and hopeful the shack wouldn’t close.

“I see lines around the block to get in there when UNC is in session. We love the place,” said Chris Plaks as she heard the news. “I hope this is just a time for them to get financially sound.”

In an email, Cournoyer said Al’s obtained “high-interest loans” as part of its expansion, blaming the loans for the current situation.

“The restaurants are strong businesses, and if it were not for these loans the companies would be healthy,” Cournoyer wrote. “This is precisely the type of problem that Chapter 11 bankruptcy is designed to fix.  I feel confident in our ability to successfully reorganize and that Al’s Burger Shack will be around for years to come.”

The restaurants are continuing to stay open and operate as usual in all three locations.

Traveling Far to Find Your Home and Yourself