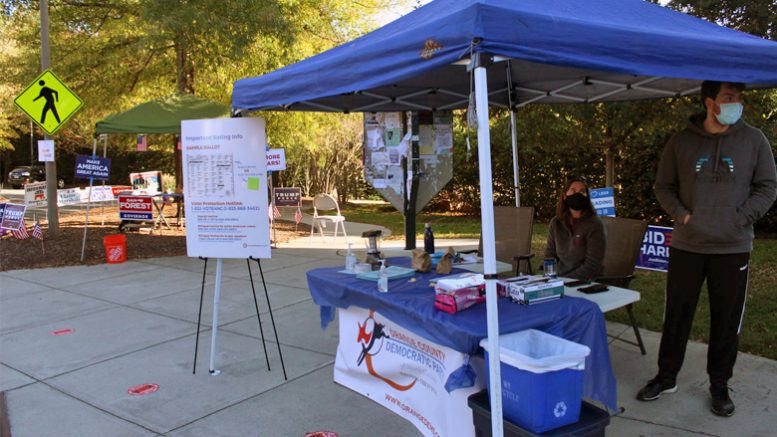 Representatives from the Republican and Democratic parties stand outside the Estes Hills polling site on a slow Election Day.

That didn’t happen at the Estes Hills Precinct this Election Day. The precinct’s polling site, which is located at the Chapel Hill Public Library this year, serves one of the county’s more populous precincts, with more than 2,300 registered voters. But by 5 p.m. on Nov. 3, only around just 80 voters had come there to cast in-person ballots. Most of Orange County’s registered voters have already cast their ballots. Almost 76,000 residents voted before Election Day, placing countywide turnout already at 67.6 percent. About two-thirds of these ballots were cast at one-stop early voting sites, and the rest were sent as mail-in ballots.

During the 2016 presidential election, slightly less than 83,000 people voted in Orange County, a total turnout of 71.1 percent. In other words: the number of ballots cast countywide reached 95 percent of 2016 totals before Election Day even began.

Similar trends were seen throughout the state, where about 4.5 million ballots were cast before Election Day, compared to a 2016 overall turnout of 4.77 million.

Yet some still vote in person on Election Day, with different reasons for doing so. Some say there are issues at stake that make voting even more important than usual. Multiple voters interviewed said they did not intend to vote Tuesday, but had procrastinated during early voting. Others intentionally chose to cast ballots in-person on the big day.

Luke Zeller, who has only voted in one presidential election before this one, said he did not vote early because he was out of town until Monday. Most of his friends voted early or by mailing absentee ballots, he said. Voting in person during the COVID-19 pandemic did not worry Zeller, and he said voting this year was particularly important to him.

“We should not have four more years of Trump because of the damaging policies that can have, especially in my opinion,” Zeller said.

Koby Whitaker, a UNC transfer student, said his peers convinced him to vote after he waited too long to participate in early voting. Although this is his first time voting in a presidential election, he said he did not have strong feelings about what his vote would mean.

“I feel like things are kind of just gonna happen however they’re gonna happen, and we all just gotta love each other anyway,” Whitaker said.

Still, Whitaker said he has reevaluated the importance of voting.

“A lot of people have kind of been helping me realize that it is a right and something a lot of people take for granted,” Whitaker said. “And so, I did want to kind of fulfill that duty as a citizen. As far as all the tension and everything amongst politics, I generally try to stay away from that, and I feel that it can be a little too polarizing sometimes when we all can care about each other more.”

Acacia Bright, who was also casting her first ballot in a presidential election, said political tension and other circumstances did not make her view her vote as more important this year, compared to others.

“I mean I think it’s important every time, but I guess Trump was, just personally for me, not someone I want in office,” Bright said. “Personally, I don’t particularly want Biden in office either, but it’s like picking between the two. I don’t want Trump.”

Bright had meant to vote early, but was not able to. She was also surprised at the lack of in-person Election Day turnout.

“Honestly, I expected it to be a lot more people here. I walked in, ‘I was like ‘Ummmm?’” Bright said. “So, I’m kind of sad about that, but I asked the people inside and they said that we had a good turnout for early voting.”

Sam Gupta, who has been living in Chapel Hill since 1995, said he waited until Election Day to vote because he thought the lines would be shorter. He was right.

This is Gupta’s fifth time voting in a presidential election, and he said the in-person Election Day turnout was even smaller than it has been in the past. This year, unlike others, he did not even have to wait in line.

John Grishin specifically planned to vote on Election Day and enjoys doing so.

Grishin expected long lines, and said he was shocked and pleasantly surprised to see that the voting site was almost empty. He said lines in Chapel Hill have been generally getting shorter for some time.

“People are early voting more frequently, but I was told there was a record turnout,” Grishin said. “But what I’m hearing in the news as the day went by, I’m hearing that there are lines everywhere all over the country, so I thought the same would be true here.”

Be the first to comment on "Amid Record-Breaking Early Voting, Election Day is Calm"