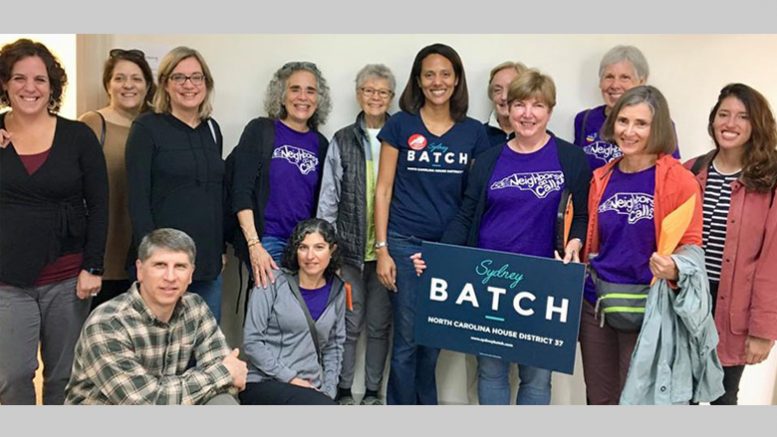 Volunteers with Neighbors on Call during a door-to-door canvass for Rep. Sydney Batch before the pandemic changed their plans.

Neighbors on Call co-founders Becca Zerkin and Andrea Stein half-wept beside one another while watching Hillary Clinton’s concession speech after she lost the 2016 election to Donald Trump.

Saddened by Clinton’s defeat, Chapel Hill residents Zerkin and Stein formulated, in that moment of disappointment, the idea for NoC, an organization of volunteers who would be focused on showing up for and supporting progressive policy in state elections.

“Our goals were a tight focus on the state legislature and keeping people engaged for the long term even when it wasn’t an election year,” Zerkin said. We wanted “to engage in advocacy in off-years” and we discussed “how to organize volunteers so that the work was spread out into manageable pieces but also ran like a well-oiled machine.”

They reached out to the community they had worked with while volunteering on the Clinton campaign to create NoC.

In little more than a month, they gathered around 60 people — shoulders smushed — inside Zerkin’s living room on two separate December nights.

“We presented this plan, and said, ‘We have a plan forward. Does this sound like something you want to do?’” Zerkin recalled.

From those meetings, “we just got so much positive energy,” Zerkin said. “It felt a lot of gratitude to have a community to join that had a vision that there was a plan. We weren’t going to scramble around for what the plan was going to be, we’re just going to follow this path, stay on this one path — can’t do everything — but have this one focus. And it was really exciting. It felt really good to have a community to belong to and a plan forward.”

Current NoC co-director Susan Blount, who joined the organization shortly after its founding, said the group became a lifeboat. “A lot of our expansion has been word of mouth,” Blount said.

What started small in southern Chapel Hill has branched out to other areas: there are now chapters in Orange, Chatham, Durham, Alamance and Wake counties. Blount said that Chatham has seen the most growth percentage-wise.

“We always encourage folks to bring your friends,” she said. “We post announcements on Facebook and Twitter and so on. But — so often — somebody’s coming in because their friend brought them.”

Neighbors on Call now has roughly 400 members who have participated over the last three months. Its email list tallies 2,200 addresses and it has grown by 600 contacts over the last year.

“Our superpower is the community-building part and keeping people engaged,” she added, “and so that’s what we’re really building on.”

While individual electoral campaigns determine which voters to contact and how to persuade them, NOC’s strength “is just getting the volunteers motivated, engaged, connected, keeping them motivated all the way through the election,” Zerkin said.

NoC knocked on more than 15,000 doors during the 2018 election cycle, playing a role in breaking the Republican supermajority in the N.C. legislature. Their efforts assisted in flipping three seats, and coming close once — with their candidate losing by only 298 votes in Alamance County’s House District 63.

Volunteers with Neighbors on Call during a door-to-door canvass for Rep. Terence Everett before the pandemic changed their plans.

“That’s why we say, ‘Every little bit helps.’” Blount said. “If you can come that close in an election, everybody needs to join in. You can make a difference when the elections are so close.”

NoC focuses on local races because the leaders believe the road to a Democratic majority in Congress goes through North Carolina. While some states are always firmly Democratic or Republican, NC is increasingly a swing state. In presidential races, N.C. has been decided by 3.6 percent or less votes the past three elections.

According to Blount, this election season NoC has focused on five hotly contested local races to help flip the General Assembly blue: House District 63 in Alamance County; District 59 in Guilford County; District 43 in Cumberland County; and Districts 35 and 37 in Wake County.

“We knocked on (the candidates) door, and said, ‘We’d like to help out. You’re our favorites’,” Blount said.

Neighbors on Call volunteers gather together before they switched to phone banking because of the pandemic.

Canvassing — knocking on doors — is the most effective method to reach voters, Blount said. But the COVID-19 pandemic has shifted NoC’s efforts to phone-banking, contacting voters by telephoning.

“We don’t host these phone-banks,” Blount said. “We just recruit the volunteers and direct them to the candidate’s phonebank. So, the campaign managers for these candidates are establishing the script and determining the list of voters to call.”

For the next month and a half, NoC has signed up 884 phone-bank shifts, said Blount. She expects that number to grow as Election Day approaches.

“Working on state legislative races, the margins of winning are so small,” Zerkin said. “And so the ability to affect change is bigger in these races than anything else. And the possible impact is so huge.

“So. for me, there’s no way I couldn’t do it. This is what gives me peace: to know that I’m doing something to help a better world be possible.”

Survival Depends on Smart Urban Designs that are Sustainable

What Do You Think of the Renovation of the Patio at the Carrboro Weaver Street Market?

COVID-19 Shines Light on the Importance of Literacy