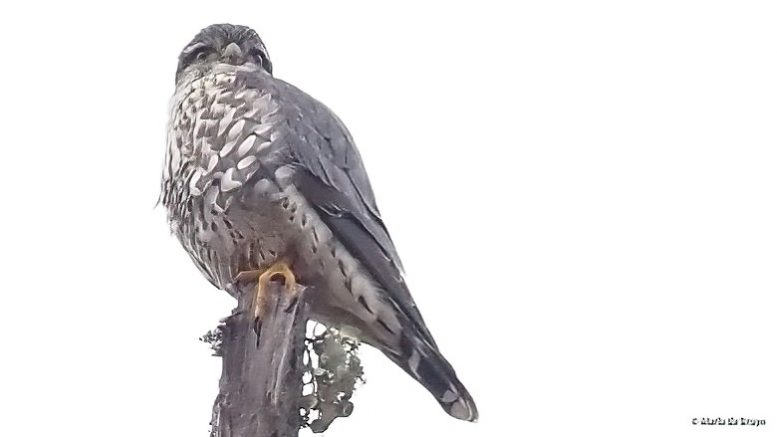 In 2014, on a birding trip to the East Coast with the New Hope Audubon Society, it was my good fortune to see and photograph a raptor in flight. I had been told it was a merlin and not being a very experienced birder, I labeled the photo that way. It turned out that it was a sharp-shinned hawk. After that, I briefly saw a merlin on two other outings when other birders alerted me to it, but I never got a good look. Then a couple weeks ago, two birding friends alerted me to the presence of a merlin at Durham’s Sandy Creek Park.

They mentioned that the raptor had perched but was also being harassed by a group of crows, so I rather doubted that it would still be around during my walk. Nevertheless, I kept peering up at treetops as I looked around and then to my delight caught sight of the falcon perched in a tree a good distance away.

In North Carolina, merlins are considered mainly to be solitary winter migrants residing along the coast and rare visitors to other parts of the state. A record is kept of rare bird sightings in our area; I was surprised when my sighting and that of my friends were not listed. A reviewer of bird sightings informed me: “Merlin is not flagged as a rare bird from September 1 through January 14 [in our area]. You saw it on January 14, so you hit the last day when it was not flagged rare! If you see it again it will be rare.”

I have not seen one again but when other people did during the past 10 days, their sightings were recorded on the rare bird alert. Nevertheless, for me it was a rarity and a welcome chance to finally see this small raptor fairly close. Merlins hunt their prey either through high-speed flight pursuits (30 mph or faster) or by scanning surrounding areas from treetops, which is what this merlin was doing. Their prey often includes house sparrows. Sandy Creek Park has an abundance of different sparrow species, so the “larder” was stocked. These small falcons can eat up to 900 birds yearly, including pigeons that are twice their size. They will also eat dragonflies, bats and small mammals.

As I neared the falcon, walking slowly, I stopped often to take a couple photos. The merlin kept an eye on me as I neared its perch. Because I didn’t move around much, the bird apparently didn’t find me intrusive and just kept scanning the surrounding area for prey, while glancing down at me from time to time.

I only stayed a few minutes near its snag and then retreated again to give it some space. After about 15 minutes of my observation, the falcon took some time for preening and feather care. It was delightful to see its feathers extended, with first one wing being stretched out and then the other.

Five minutes later, after peering down intently, the merlin suddenly dropped down in pursuit of a bird it had spotted below. I believe that it caught its prey as it flew off into the distance, likely looking for a more secluded spot to enjoy lunch. As for me, I was grateful that this beautiful falcon had given me a bright spot in an otherwise overcast gray day.

The lead photo and introduction to this article were changed Jan. 25, 2023, to correct misidentification of the bird in the original photo.

Be the first to comment on "An Almost ‘Rare’ Bird"