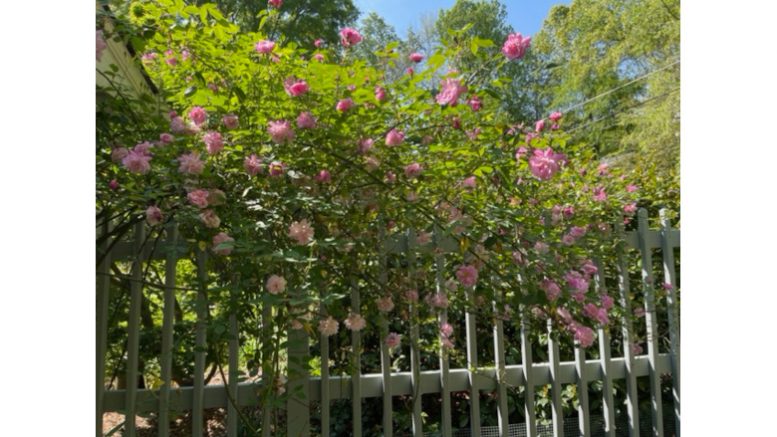 Of course, it was all the fault of the Empress Joséphine, the ex-wife of Napoleon. If she had picked any other plant for garden concentration at Malmaison, I might have escaped my rose obsession. Instead, she vowed to plant every known rose in her garden – and even had the cooperation of the British Royal Navy who allowed her rose purchases to pass blithefully through their naval blockade.

What aroused my initial curiosity was the fact that in the 19th century roses required no spraying, which in turn meant that there were still roses out there that could be grown sans chemical treatment. “Why on earth,” I asked myself, “did we create so many roses in the 20th century that could only exist if they underwent an intensive spraying schedule every ten days?”

Here it’s necessary to briefly go over rose genealogy – don’t groan as it’s really quite interesting. In the beginning, there were the species roses, those roses that arose in the northern hemisphere on their own. No one knows exactly how many species roses there are but chances are good that you have encountered some, such as Rosa banksiae, Rosa roxburgii, or that wicked weed, Rosa multiflora.

While many of the species roses have little value horticulturally, the old garden roses that arose via hybridization from several species roses have great garden qualities. However, with the exception of ‘Autumn Damask,’ all of these that originated in the West only bloomed once.

When China opened up, new roses, primarily the tea roses and china roses, were introduced to Europe. The Europeans quickly went mad for them as these roses rebloomed – but there was a hitch: They could not withstand the cold European winters.

During the 19th century, there was a period of tremendous hybridization in Europe, especially in France, in an effort to produce a hardy reblooming rose; ‘Autumn Damask’ figured prominently in these early attempts. The result was 22 different classes of roses, all listed under the heading of “Old Garden Roses.” This is where rose genealogy becomes confusing as a bourbon rose, arising on the Ile de Bourbon, had no connection with the French royal family, while the damask rose hailing from Damascus, had no association with the fabric. You can drive yourself crazy trying to identify roses from these different classes. My advice is to let these classes remain still for the present.

In 1867, an important event occurred in the rose world: This was the introduction of the first hybrid tea rose, ‘La France’, an event that separates the old garden roses from the modern roses. All roses appearing after 1867 come under the latter heading, even if they resembled old garden roses in size, shape, and fragrance.

Modern roses, of which there are 14 classes, came to dominate the rose world in the 20th century where size and shape won out over fragrance. The epitome of the perfect rose became the hybrid tea rose. As hybridization sought beauty over health, the use of intense anti-fungal sprays became necessary to help these new hybrid tea roses survive the onslaught of fungal diseases.

Many hybrid teas lost their scent as fragrance is one of the first characteristics frequently sacrificed through intense hybridization. Some were so weak that they needed to be grafted as they couldn’t survive on their own roots. To ease the demands of spraying, “rose gardens” consisting of two (or more) rigid rows appeared, placed frequently in a sunny corner of the garden.

Now don’t get me wrong: Many of these hybrid tea roses were beautiful if properly tended. However, it was obvious that roses in the time of the Empress Joséphine were quite different and not nearly as needy. The best-selling rose of all time, ‘Knockout,’ appeared at the right time. In 2000, gardeners were tiring of the incessant spraying and were becoming more concerned with the ceaseless employment of chemicals in the garden. Suddenly, we had a rose that could survive all on its own – and it rocked the rose world. At the same time, Texas A & M was conducting its own Earth-kind trial of roses while beginning in the 1990s, when Germany was going green, the German hybridizer, Kordes & Sons, began concentrating on producing healthy roses.

At a time when gardeners wanted a rose that demanded little care, ‘Knockout’ proved what Joséphine knew all the time: There are roses out there that are strong enough to make it on their own. Today, knowledgeable gardeners look for “disease resistant” and “own root” in descriptions in rose catalogues.

Alas, the fabled rose garden at Malmaison did not survive. Joséphine was in the vanguard of the rose movement so her garden was not appreciated after her death. However, I like to think that the lady knew quality when she saw it.

Next week I’ll delve into some good places to buy roses.

Be the first to comment on "An Obsession with Roses"