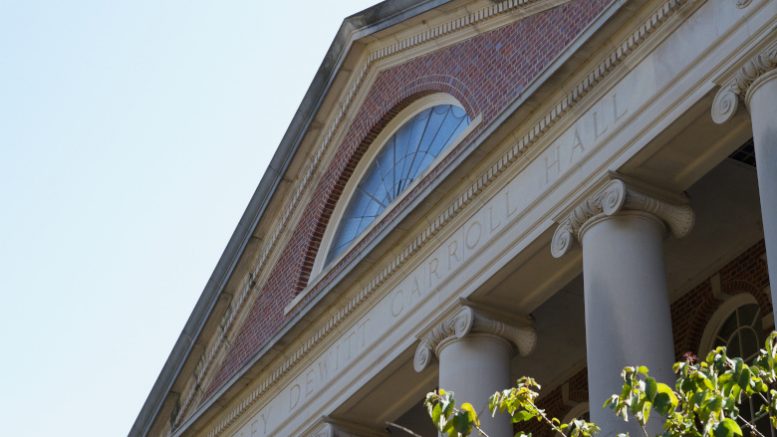 Carroll Hall on the UNC-Chapel Hill campus has housed the school's journalism department since 1999. The university announced last Friday it had reached a financial settlement with School of Journalism alum Nikole Hannah-Jones — the most recent development in a saga that has roiled the university community for the past 18 months. PHOTO CREDIT: Keith T. Barber

The financial settlement is for less than $75,000 and was approved by Chancellor Kevin Guskiewicz, according to a press release issued by David Boliek, Jr., chair of the UNC Board of Trustees.

Deb Aikat, a professor at the UNC Hussman School of Journalism and Media, said the amount is set at or below the current level because Guskiewicz has the authority to negotiate settlements less than $75,000 without seeking approval from the UNC Board of Governors.

In May 2021, the UNC Board of Trustees first voted to decline Hannah-Jones’s tenure application and instead offered her a five-year contract. Following public criticism, a month later, the board voted 9-4 to approve her tenure. Hannah-Jones declined the offer and joined Howard University as the inaugural Knight Chair in Race and Reporting.

Since the extended controversy, many feel that the settlement is a step in the right direction, but Aikat said that it has raised more questions than answers.

Aikat said that the university is obligated to inform the public of information about the settlement, especially after members of the UNC community have experienced a sense of loss.

“This controversy did not do anybody any good. All of us would have been enriched by Nikole Hannah-Jones being hired, and she could have benefited our community,” he said. “In many ways, it’s a loss, and when we are suffering or healing through a loss, and the university says that we are doing a settlement, it’s a wonderful step, but we need details.”

“I’m tempted to say that it’s unprecedented,” he said. “In my 32 years here, I can’t think of a single case where a tenure recommendation from a department or a professional school was turned back by the Board of Trustees, and that’s how it should be.”

Richard Stevens, the then-chairman of the Board of Trustees, told Associated Press last year that Hannah-Jones’ tenure application was rejected because she didn’t come from a “traditional and academic-type” background.

Smith said that the Board of Trustees should respect tenure recommendations by faculty and departments, including that of Hannah-Jones, except in extraordinary circumstances which should then be immediately communicated to the faculty.

Contrary to this principle, many faculty and students feel that they were not included in the decision-making process.

Denise Kyeremeh, a UNC senior double majoring in media and journalism and information science, said that it’s disappointing that many students felt the need to protest the school.

“It showed that the university doesn’t always act with care towards the students,” she said. “I feel like a lot of the students, specifically like students of color, like black students, their culture has become very tired of the way UNC makes decisions.”

Kyeremeh also felt that the dispute reflected the university’s lack of understanding for students of color.

“Another thing that the university showed is that it’s out of touch or maybe even oppressive because I think that there’s been a long history of students of color struggling.”

Jahmila Best, a recent public policy graduate, said that it has been overwhelming to keep up with university-related controversies during her time at UNC, including the prolonged debate over the Silent Sam Confederate monument that erupted on the campus in 2018.

Carmen Chamblee, a recent UNC School of  Journalism and Media graduate, is among those who worry the public has started to perceive the school differently.

Chamblee said the Hannah-Jones tenure decision may have discouraged people from joining the university.

“I definitely feel like it has negatively affected UNC because it shows that you have to have a certain type of work or opinion to work there, and if you don’t, you would be blacklisted,” she said.

“When you’re making headlines because of your wrongdoings for a professor of color, then, of course, other professors of color aren’t going to want to join you,” Moreno-Lizarazo said. “Even for students, if you have the opportunity to go to a place where you’re more valued and you know that you don’t have to continuously fight, then why would you come here?”

In May, the Accrediting Council on Education in Journalism and Mass Communications voted to downgrade the Hussman School of Journalism and Media to “provisional accreditation” status out of concerns for diversity, equity and inclusion at the school.

Kyeremeh said that the downgraded accreditation is “good and sad” at the same time.

“It’s good that they [UNC] now have to be forced to look at their practices, but it’s sad that the actions of the Board of Trustees and whoever was making those decisions have impacted the school,” she said. “What’s really sad is that it will impact students and how their skills are viewed.”

As a long-time faculty member, Smith expressed that the dispute has also contributed to a lack of academic freedom at UNC.

“That puts a chill on academic freedom, and shared governance was also violated, disrupted, and ignored by the Board of Trustees because they failed to respect the tenure decision that had been handed down by faculty,” he said.

Diane Robertson, political chair for the Chapel Hill-Carrboro NAACP and a member of President Biden’s Advisory Committee on the Arts, questioned the university’s independence from past to present.

“This whole Nikole Hannah-Jones [situation] is just sort of the apogee of the loss of control over the independence of the university. Maybe [UNC] never had any independence,” she said.

The university needs to more thoroughly inform the public of its decision-making processes, including its settlement with Hannah-Jones, according to Aikat.

“My submission is that in the spirit of transparency, accountability, and honesty, UNC leaders should enunciate,” he said. “And why am I asking for that? I think that will enable our Carolina community to contribute to the success of UNC’s diversity initiatives. I hope our university tries to learn from this and develop diversity initiatives that can prevent such devastating controversies in the future.”

School Board Candidate Forum Highlights Areas of Consensus and Contrast