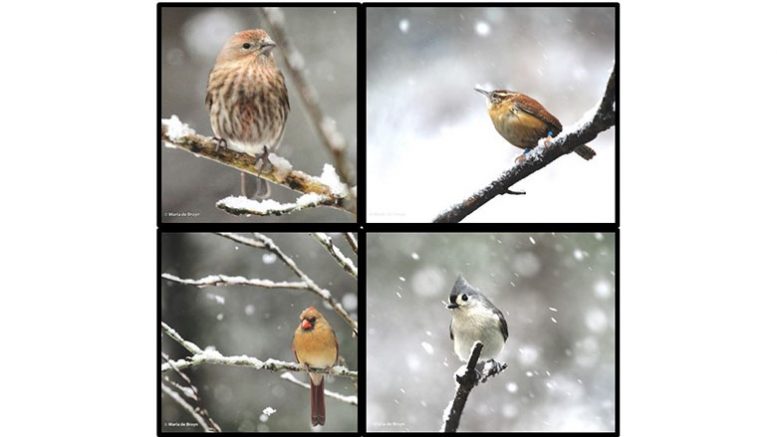 With the relatively numerous days of temperatures in the 60s and even 70s in the past 6 weeks or so, it seemed as if “real” winter weather might be passing us by this season. And then we had a brief snow Jan. 3 and again on the 16th with more snow forecast for later in the week.

The birds became even more avid feeder visitors in my yard, coping with cold temperatures by fluffing up their feathers. This creates air pockets between their skin and inner feathers which trap body heat and help to keep them warm.

In addition to harboring a dislike for colder weather, some people tend to avoid or limit their outdoor walks in winter because they don’t enjoy bundling up and/or because there isn’t as much beautiful vegetation to admire.

A way to make outdoor ventures a bit more fun is to look at the bare stumps, branches, logs and other natural phenomena to see whether we can identify faces or other objects in them.

There is actually a scientific term for this: pareidolia, which is one form of a human tendency to see patterns in random data or visual or auditory information. A commonly known example of this is when people say they see “the man in the moon.” Quite a few people, when looking at clouds see shapes of people or animals or objects and Leonardo da Vinci even wrote about the phenomenon in relation to art. I sometimes consciously look for such patterns and have become fond of a few familiar objects that I encounter on walks. For a long time, there was a branch at Sandy Creek Park that looked to me like a perched bird (above). When the snag was toppled this past year, I actually missed seeing the familiar sight.

There is now another stump of which I am quite fond. I call it the caretaker of Sandy Creek Park since it looks to me like a human head of someone gazing out at the pond where it is located.

During an encounter with middle-school students this past summer, I showed them some photos that I thought would evoke recognition of “hidden objects” and, sure enough, the young people did see various objects and figures in the vegetation and rocks that I showed them. If you see any such phenomena and would like to share them with other readers, post a photo or link to one in a comment. Such photos by others have become the subject of newspaper articles and have given enjoyment to many.