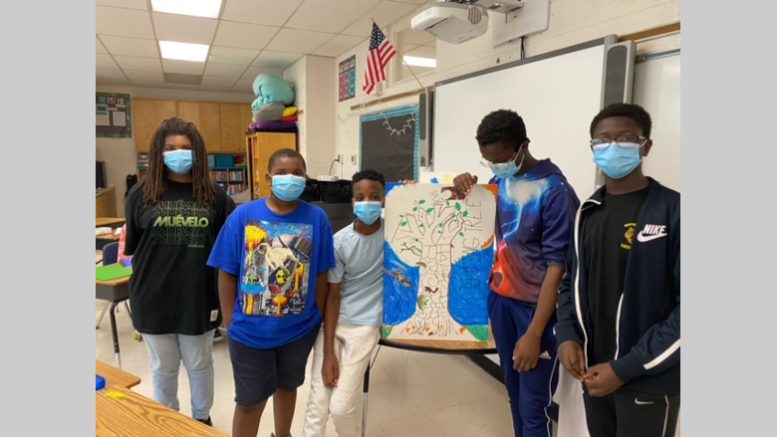 This year, National Forestry Week took place from July 12th-18th. Sponsored by the National Forest Foundation, the celebratory week aims to motivate more people to restore and enhance both national forests and national grasslands in the United States. The Foundation was chartered by Congress in 1992 as a non-profit partner for the U.S. Forest Service.

One of the Foundation’s core values is to: “reach out to communities, individuals and partners, to create ownership and support collective efforts that preserve and embrace these national treasures.” A step was taken locally in that regard during a session on July 13 with middle-school participants in this year’s E3 S.T.E.M. Camp (E3 = Empowering Excellence through Exploration).

During a session that I led with the students, we explored trees from different perspectives:
• The biological make-up of trees (parts of trees, kinds of trees, what tree rings can tell us);
• Why trees are important for wildlife;
• Why trees are important for people;
• Threats to trees and how they can protect themselves;
• How people can protect trees, promote preservation and conservation, and create new places for trees to take root. The students participated enthusiastically, answering and asking questions. They were also able to see that we can make up games when out walking in a forest. For example, sometimes a tree or part of it can appear to be something else, such as a branch that looks like a bird or a shadow that gives the tree a wry smile.

We viewed an animated video that showed how different trees and plants can use their own resources to deal with potential damage from bacteria, insects and animals. The students found it an eye-opener to see how various plants can emit volatile organic compounds to elicit help from other wildlife species (e.g., ants, wasps and birds) to fend off impending threats.

Most of the young people were amazed to learn that trees can communicate among themselves using the “wood-wide web” of underground fungi (mycorrhizal networks). This living web enables trees to help ailing relatives by offering them extra nutrients and enables them to warn neighbors of impending threats.

After discussing the numerous products people use that come at least partly from trees (including chewing gum and milkshakes!), we briefly reviewed jobs related to forestry and trees and how trees have inspired artists and poets. We also touched briefly upon what we can do to preserve and promote trees in our community and the students created posters to show what they thought were the most important or interesting things they had learned during our session. I hope that you also will view the videos mentioned above so that you have a greater appreciation of trees and plants when you go out in nature. Perhaps viewing them will inspire more people to organize and/or participate in National Forestry Week projects in our community in the years ahead.

Insects Can Be Exciting!