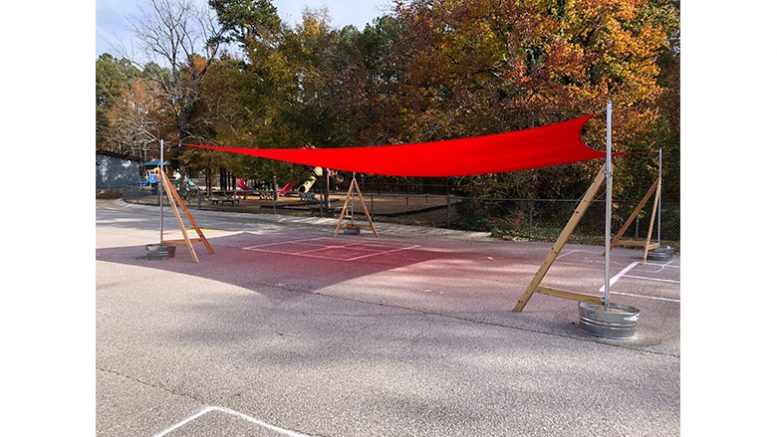 A shade structure that parents built on the blacktop at Ephesus Elementary School. Photo by David Schwartz.

While the Chapel Hill-Carrboro City School district has not witnessed the rancorous antagonism between parents and school officials that has occurred elsewhere in recent months, local parents have expressed frustration with aspects of the district’s COVID response. Specifically, they have been critical of the district administration for not making preparations for outdoor dining in advance of the start of classes and for allowing inequities in resource availability to persist across the system.

At a special lunchtime meeting Aug. 19, four days before the start of school, Duke University physicians and professors Danny Benjamin and Kanecia Zimmerman presented to CHCCS families and staff about the risks of COVID-19 transmission associated with students’ imminent return to in-person learning.

Zimmerman and Benjamin are part of the ABC collaborative, a medical consulting program based out of the Duke University School of Medicine and Clinical Research Institute. The Collaborative spans several university medical institutions across 14 states and works to ensure proper COVID-related safety measures are followed in school settings.

The physicians emphasized that activities during which students cannot wear masks, such as at mealtimes, pose the greatest transmission risks. “If people are not masking  . . . . ventilation becomes much, much more important,” Dr. Zimmerman said. “This is why [we recommend] going outside and eating.”

While parents generally praise the district’s efforts to minimize COVID transmission inside school facilities by adopting rigorous science-based safety protocols — e.g., masking, distancing, screening and frequent sanitizing — and equipping schools with indoor air purifiers, information shared among parents on social media at the beginning of the school year raised concerns that the need to provide outdoor dining options had been overlooked.

“There was an overwhelming sense in August among parents and caregivers that our school system had not done a lot of work preparing to minimize those high-risk times,” said Tiffany Englert, a PTA member at Ephesus Elementary School.

During the first weeks of the academic year, parents at some schools took it upon themselves to provide outdoor dining options by donating items and helping set up and take down structures. This led to concern among some parents about inequities across the system that they felt could have been avoided had the district enacted clear and standardized policies for schools.

Cassie Ford, speaking for the PTA Council, voiced these concerns at the Sept. 2 meeting of the CHCCS Board of Education (BOE).

“Without clear policies, procedures and resources, there are glaring inequities across the schools,” she began. While “a handful of schools with active, well-funded PTAs, proactive administrators and parents who are able to donate large amounts of time and money have been able to invest in sturdy tents and picnic tables and have been consistent in outdoor eating compliance,” other schools “are struggling to fulfill these needs.” Ford said that the gap between what different schools had spent to address this need was estimated to be as much as $10,000, with some schools having spent nothing.

Kristie Mather, the mother of students at Glenwood Elementary and East Chapel Hill High, spoke at the same board meeting, stating that “parents across the district were scrambling to address an issue that the ABC Collaborative highlighted as a dangerous spot in [the district’s] COVID plans.”

Mather said Glenwood parents, sometimes on “between days to hours’ notice” had met three times since the school year started to put up and break down canopies. Five parents had met at the school that very morning at 6:15.

Mather echoed previous speakers’ appeal for transparency and communication between the district and parents. Comments that were emailed to the board also expressed concern over what they described as “a major equity issue.”

“It cannot be that some schools have the bounty of providing [outdoor dining options] through grants, donations, funding, PTA, etc. while others do not have equal access,” wrote Nadiya Miraki.

“While some PTAs and parents have managed to implement this at a school level, it is not standard across the district. This is an EQUITY issue,” wrote McDougle Middle School parent Lora Klein.

“Obviously, any school district will appreciate the generosity and willingness of the parent community to work together to do what’s best for children,” district Chief Communications Officer Andy Jenks said. “As a district, we know and feel the obligation to serve our schools and communities equitably. It’s very important that we as a district put resources forward where they’re needed most to be sure that all of our schools are able to provide a safe and comfortable learning environment.”

At the Sept. 2 BOE meeting, in response to the concerns parents had raised, CHCCS Executive Director of Facilities Eric Allen presented to the CHCCS Board of Education a plan to procure permanent covered outdoor dining structures for all the district schools.

“These shade structures would address the immediate need of schools related to COVID-19 protocols,” Allen wrote in his brief. “Schools have been encouraged to minimize transmission of the virus by having students eat outside whenever possible. In that regard, these structures would benefit the students’ experience by providing shade to keep them cool in hotter weather and to provide cover in the event of rain.”

The proposed $820,000 purchase, to be paid with federal CARES Act funding, would provide one covered structure at each elementary school and at Phoenix Academy, two at each middle school and Carrboro High School, and three for Chapel Hill High School and East Chapel Hill High School. The board approved the purchase. However, because of the pandemic-related supply-chain bottlenecks that have led to shortages of many goods across the economy, the BOE was told it could take up to three months for construction materials and picnic tables to be delivered to the schools.

CHCCS Board of Education member Mary Ann Wolf said, “The need isn’t three months from now, the need is tomorrow.” She continued, “It’s not OK that some of our schools have PTAs that can provide a lot more when others can’t, and it’s also not fair that we’re relying on parents to be the ones to figure this out.”

To address this concern, the district also proposed to allocate to each school principal $20 per pupil to be used to address needs related to coping with the pandemic. While waiting for the purchased structures to arrive, the schools coped as best they could. Phillips Middle School moved their cafeteria tables under awnings. Ephesus Elementary had the funds to purchase metal picnic tables and a team of parents built a shelter on the blacktop. Rashkis Elementary and Seawell Elementary have students sit on foam mats outdoors. Students at Frank Porter Graham Elementary were told to bring towels to sit on.

In mid-November, Chief Communications Officer Jenks informed The Local Reporter that “Construction on shaded structures is underway, but in terms of fully stood-up structures, the effort is not yet complete. One of the issues has been drilling deep enough holes to support the structures. Instead of digging “down” we need to dig a [wider] base . . . and in some instances the drills eventually hit the rock underneath the surface.”

Jenks also stated that the district continues to order picnic tables, which are being delivered on an ongoing basis. He estimated that more than 200 tables have been ordered and that by the end of November all schools in the district will have the tables they are expecting to receive.

Even after the purchased structures and tables have been delivered and installed, other challenges will remain. For example, according to Englert, Ephesus doesn’t have a wealth of outdoor space to work with, so it’s not clear where the outdoor structures will be located.

In addition, as winter weather sets in, outdoor learning and mealtimes will inevitably become more difficult. Englert is currently working with the school to start a winter coat drive so that students will be able to remain comfortable while outdoors.

According to Chief Communications Officer Jenks, the schools have so far spent or encumbered ~$67,000 or ~27% of the $250,000 appropriated at $20 per student by the BOE Sept. 2.  The funds have been spent primarily to reimburse individual schools for purchases related to outdoor eating and learning, such as outdoor chairs and temporary canopies. A school-by-school breakdown of how the funds have been spent has not yet been made available.

The incidence of COVID-19 within the CHCCS district has so far remained quite low. Through mid-November, only a single cluster outbreak — defined as five or more linked cases — had occurred, fewer than in neighboring school districts. As a result, all CHCCS schools have been able to provide full-time in-person instruction without interruption. The recent approval of COVID vaccines for children aged 5-11 and of booster shots for adults is expected to help minimize transmission within the school setting.

Family of TaeVeon Young Offers $5,000 Reward for Information Leading to an Arrest in Murder Investigation

Be the first to comment on "As School Year Commenced, Lack of COVID Preparations Highlighted Inequities"