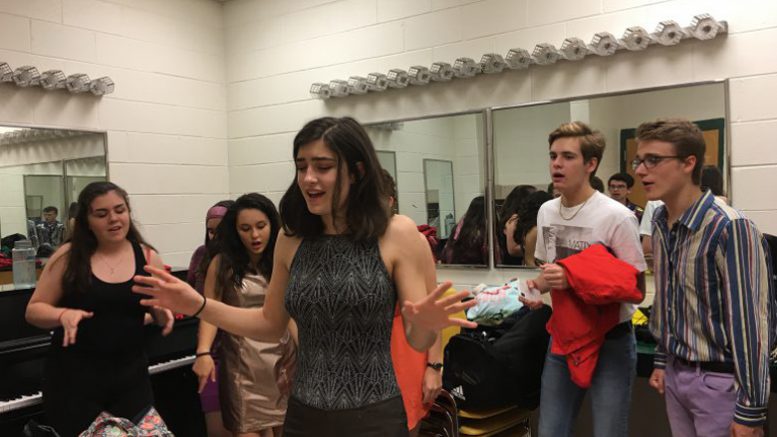 A lot was going on backstage in the last hour before East Chapel Hill High School’s final A Cappella Jam.

The practice rooms bustled with students in disco-themed costumes and sunglasses. The tech crew staffed the empty auditorium, giving singers last-minute directives on performance logistics. Friends waited in the music hallway, listening to the snatches of “Stand By Me” that kept escaping from the women’s dressing room. It was vibrato-filled, organized chaos: a perfect preview of the energetic show to come.

The Final Jam is an annual tradition; an extravagant end-of-year performance that brings together the Alley Cats, a girl group inspired by the UNC Loreleis, with the boys of the Chiefs of Staff and the coed Scattertones. All three vocal ensembles are mentored by Desiree Davis, the chorus teacher at East Chapel Hill.

Backstage, she cheerfully took a moment to explain why she founded the groups, and why it gives her joy to help create performances like the Final Jam.

“At the end of the day, it’s just fun,” she said. “And that’s a perfect reason for this in itself.” Despite the jittery, high-energy atmosphere, it was clear that the singers had done their prep. With the first few performances — including a beautiful rendition of Yebba’s “Evergreen” and a peppy “I Want It That Way” by the Backstreet Boys — the audience was hooked for the night.

“There were no bad songs!” said a girl to her friend as they walked out the double doors of the school.

The a cappella singers had prepared a quality jam that didn’t falter or fizzle out. The Scattertones’ powerful performance of “The One That Got Away” won the respectful silence of the audience, while “Stereo Hearts” was goofy, and showcased the rap skills of seniors to the crowd’s delight. The Alley Cats held people rapt with Nick Jonas’ “Unhinged,” which earned some of the loudest cheers of the night. And when the Chiefs of Staff did “Madness,” palpable energy filled the auditorium.

Most memorable, however, was the Christmas set, which most of us didn’t see coming. It might have been the elf hats that sparked a wave of giggles, though the singing reindeer had particular charm. Minor hysteria broke out when Santa was rolled onstage in a garbage can, tossing tissues and deodorant benevolently around.

It would have been hard to predict that boisterous Christmas carols were exactly what people needed on a muggy May evening, but the performance could hardly have been more good-natured. As Feliz Navidad came to a close, a grinning girl turned to her friend across the aisle. “I freaking love East,” she said, matter-of-factly.

As much as the audience enjoyed the concert, the performers looked completely in their element. About half of the singers on stage were also enrolled in chorus class, said Nadia Zabala, a junior. For the others, however, a capella is one of the few opportunities to regularly sing with a group and give vocal performances.

All three groups rehearse twice a week, once during school and once over the weekend, and the community is tight.

“A cappella introduced me to a group of amazing and supportive girls who love me for who I am,” explained Audrey Ashdown, who’s finishing up her freshman year. Stacey Thornton agreed that, her favorite part of singing with the Alley Cats is the people.

“I come to as many (concerts) as I can,” said Jean Bartholomew, grandmother of senior vocalist Eden.

And at the end of the concert, when each group invited alumni singers to join them on stage for a traditional tune, a surprising number of high school graduates rose to participate in the fun. The final song, “I Wanna Dance With Somebody,” was sung by all three groups together. Not surprisingly, it received a standing ovation.

Be the first to comment on "At East, Music is Sweet Jam"