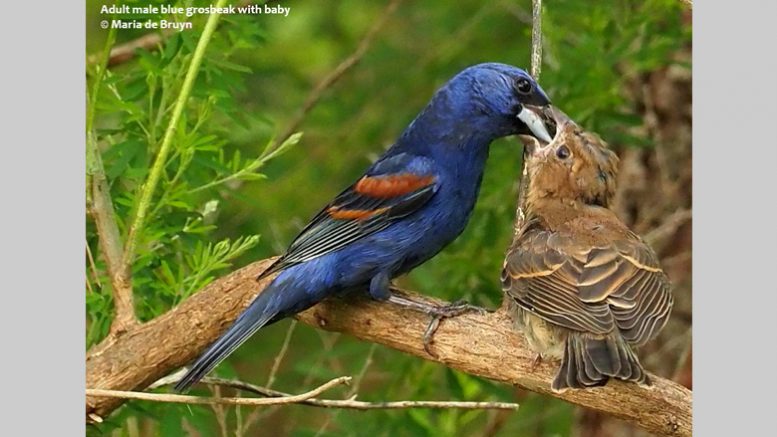 While we are now well into summer, some avian neighbors were still mating recently and expanding their families. Several bird species have more than one brood each season, including the Eastern bluebirds, American robins, Carolina wrens, blue grosbeaks and mourning doves.

There are two major kinds of baby birds. The altricial birds hatch as helpless young who must develop their sight and feathers, requiring parental care until they can fly from the nest. They include the songbirds that you may see often, such as bluebirds, chickadees, nuthatches and Northern cardinals.

In contrast, the precocial bird babies can quickly move about on their own after hatching and are able to begin foraging for food as they follow their parents around. In some cases, the parents may also feed them. Examples of precocial birds include killdeer, Canada geese and ducks. Many adult birds appreciate bird feeders as “fast-food” stops for themselves while they spend most of their time searching for meals for their nestlings. Even the species who mainly eat seeds feed their babies insects because the young ones need lots of protein as they develop toward maturity.

Watching the baby birds after they fledge (leave the nest) can be quite interesting. In some species, the babies start out looking quite different from their parents, such as the Eastern bluebirds, Eastern towhees and Eastern starlings. In other species, the young look very much like their parents. Even when the adults and young look alike, you can often tell which bird is the baby because the young one will call and rapidly flutter its wings as it crouches and waits to be fed. The young birds also have light colors in the corners of their beaks (called the gape area) and when they open their mouths wide, this triggers the adults to stuff food into their mouths.

Gradually, the young birds begin getting their own food, although they may still beg for food from their parents for quite some time.

When you are out walking or watching bird feeders, it can be entertaining to observe the birds as they nest and raise their demanding children. And you may even see adult birds begin to drive away their babies, either because they’re tired of feeding them or because they are busy with a second or even third brood for the season. This is the case for a pair of Eastern bluebirds in my yard who – to my great surprise – chose a decorative bird house in which to raise their second brood after chasing their older youngsters away. The four nestlings fledged not too long ago and are now also visiting the feeder poles in my yard. They’re still waiting for mom and dad to feed them but will undoubtedly begin grabbing their own mealworms very soon.  And then it will be interesting to see if the bluebirds have a third brood this year.

Be the first to comment on "Baby birds are still around!"