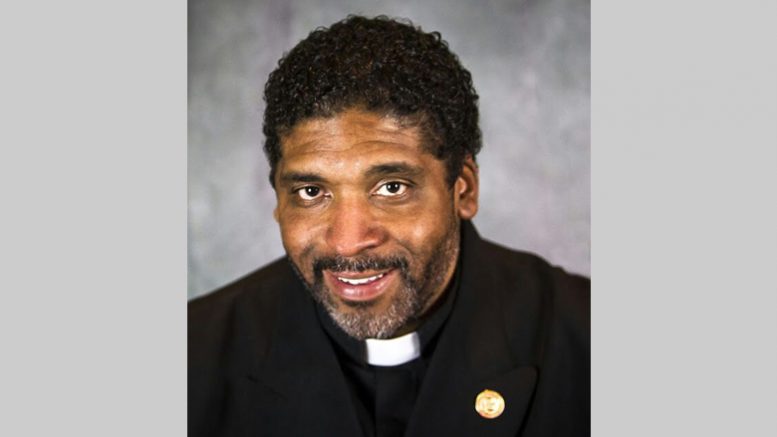 “To leave systemic racism and systemic poverty and these other inter-locking injustices unaddressed is to be constitutionally inconsistent, morally indefensible and economically insane, and nothing would be more tragic than to turn back at this point,” Barber said.

He was the keynote speaker at a very different gathering, a virtual one, that celebrated the civil rights leader on Martin Luther King Jr. Day.

“Think back to how much we looked forward to this year — it lasted five days,” Anna Richards, immediate past-president of the NAACP’s local branch, said. “Let that not undergird us as we go through this celebration today, honoring the peaceful revolutionary. I emphasize both those things, because he was indeed a revolutionary. He revolutionized this country; he attempted to touch the heart of America.

Barber, the former president of the North Carolina NAACP and the co-chair of the Poor People’s Campaign and a major civil rights figure himself, focused his remarks on the need for Americans to continue taking a stand against injustice.

In a speech titled, “Nothing Would be More Tragic Than for Us to Stop at This Point,” Barber drew from the Bible, noting “that subject, that theme, actually comes from a similar sentiment that Martin Luther King [Jr.] lifted before us about eternal vigilance in the cause of justice, love and truth, and work toward the beloved community,” Barber said. “In his last sermon, he sounded like Paul, he sounded like Amos, on the evening before he was shot down outside the Lorraine Motel in Memphis.”

Barber noted that in his final speech, King said “America was sick with racism and militarism and poverty, facing troubling times.”

America is in a similar situation right now, Barber argued. While acknowledging the progress made in recent years, he said, Americans must continue fighting systemic racism and poverty.

“Nothing would be more tragic than to stop at this point, we’ve got to see it through,” Barber urged. “We have to be concerned about our brothers and sisters. Either we go up together or we go down together.”

Barber emphasized throughout the speech the need to prop up poor and low-wealth communities, to listen to their needs and problems to understand and fully fix them.

“We met with them and we said, ‘We want you to see the faces of the people,’” Barber said. “That’s what Dr. King was saying in the Poor People’s Campaign; he was saying, I’m going to Washington with poor and low-wealth people so that you can see them. He believed in the agency of poor and low-wealth people and [that] they were the ones that had the possibility, because the rejected must lead the revival.”

Barber also maintained that the violence seen at the Capitol on Jan. 6 was pushback against the possibility of revival.

“Extremists would not be fighting this hard to overturn a democratic election, fighting this hard to suppress the votes of so many people, black and white and Latino, if they did not know that their agenda is threatened when the people’s voices are heard and when moral fusion coalitions come together,” Barber said.

The reverend concluded his speech by saying that if people are really serious about carrying on the tradition of Dr. King then the United States must, among other items, guarantee comprehensive healthcare for all, regardless of preexisting conditions; raise the minimum wage to $15 an hour, immediately; provide free COVID-19 vaccines to all; enact a national rent freeze and mortgage moratorium; increase food stamp benefits and increase support for public schools to provide continuous and equitable quality remote learning for the duration of the pandemic. He also called for protection and expansion of voting rights and comprehensive immigration reform.

Much of this agenda, Barber said, can be accomplished through restructuring the Pentagon budget.

“If we want to heal the soul of America, we must bind up for broken bodies and broken communities,” Barber said. “We cannot be at ease, we must hear the cries of the millions and millions of people that are hurting and turn that mourning into policies of hope in order to bring a new morning. We must hear the mourning and meet the mourning with public policies which will guarantee people a new morning.”

Letter to CEO of Bank on Government Attitudes

What helped you make it through?