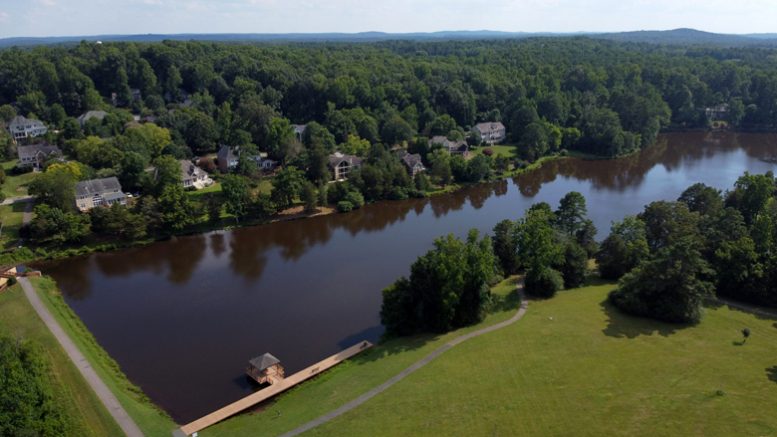 “It is one thing to have a conversation,” said Tilly Pick, a homeowner in Lake Hogan Farms. “It’s another thing to take that conversation and actually put it towards something.” Pick, along with Dave VanHook and Renee Wilson, co-founded The Lake Hogan Farms Climate Change Group, an apolitical, grassroots, volunteer-based organization focused on combatting hyperlocal greenhouse gas emissions. The group formed this spring during the beginning of the COVID-19 pandemic.

“It’s been interesting,” VanHook said, “because I’ve worked a lot with Tilly — and some of the other people in the group — but we’ve never met face to face, and he lives in my neighborhood.”

VanHook is a computer programmer and his primary contribution has been the development of the LHFCCG website. The website is a source where neighbors can go to learn more about a variety of topics such as electric vehicles, chemical-free lawns, composting and solar energy.

“There’s a lot of people that are on the fence or interested in green technologies or being more green,” VanHook said. “But they just don’t quite know how to do it. So, our goal is just to provide information for people to be able to make good green decisions when they want to and to be able to make a difference.”

VanHook is one of those people. He had had an interest in solar energy for a long time. After a member of the LHFCCG spoke with VanHook about solar, he is now in the process of buying some for his home.

“That’s one more house in Lake Hogan Farms that is going to be trying to generate its own electricity rather than taking it from the power company,” VanHook said.

According to Laura Janway, the Town of Carrboro’s environmental sustainability coordinator, the community sector accounts for 93 percent of greenhouse gas emissions within Carrboro; the remaining seven percent comes from local government and school operations.

One of the recommendations within the town’s Community Climate Action Plan is the “Green Neighborhoods Initiative,” where community leaders educate and engage neighbors to reduce their carbon footprints, Janway said.

“The LHFCCG is a great example of a project that would align well with the town’s efforts to make neighborhoods in Carrboro greener while connecting and inspiring community members to be as involved as they can be and take actions, big and small,” Janway wrote in an email.

In September, the LHGCCG conducted a survey to understand homeowners’ attitudes about climate change and how neighbors felt about their community’s public green spaces.

LHF has 434 homes and 124 community members responded to the survey. Forty-four percent of those surveyed thought it was extremely important that homeowners collaborate and support efforts to mitigate climate change in whatever way they can, based on each individual’s situation and priorities. Moreover, nearly 95 percent of the respondents reported they considered climate change at least somewhat important.

Wilson has lived in LHF for seven years. She was a part of an effort to create an herbicide-free area in the North and South Fields Circle lawns. Now the common grassy areas where children play and residents walk their pets have been herbicide-free for a year-and-a-half.

For Wilson, chemical-free lawns are also a selling point in home buying and should replace the current emphasis on lush, green lawns that are generally connected to property values.

“My hope for the future is that the aesthetics will change around what constitutes a beautiful lawn,” Wilson said. “That when we look out and we see a lawn that’s grass and clover we’ll think, ‘Oh, that’s beautiful,’ because it’s ecologically diverse and healthy, as opposed to a monoculture lawn that’s just simply green.”

The main goal of the group remains providing tangible resources for homeowners so they can make better green decisions.

Wilson has already spoken to local residents about the LHFCCG and directed them toward the website. According to Pick, other neighborhoods are welcome to use the group’s content for their climate change efforts.

“Our goal that we have is just to help people that live here actually do something,” Pick said. “And I know it might be might seem like a small goal, but if we can achieve that in the community, they can take it into their work lives, into their families, to their friends — that’s our little ripple effect.”

As VanHook said, “I could buy myself a gas-powered leaf blower, or I could borrow this electric one from around the corner. Why wouldn’t I do that?”

Eggs, Pecans and a Side of Banter

Why I’m Running for CHCCS Board of Education