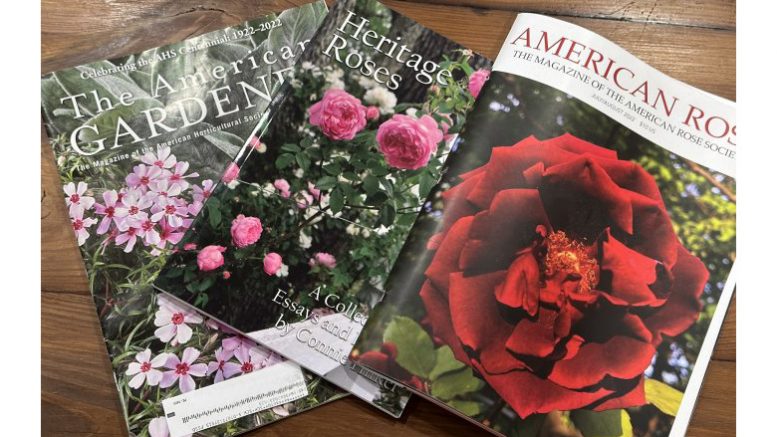 Pity the poor national gardening magazines as they have to appeal to the interests of those of us who garden in the Southeast along with those who garden in far colder climates—there really is very little meeting ground. After diligently reading them for years, I reluctantly came to the conclusion that there was little I could learn from them as their readership is too widely dispersed. In a word, what grows well in California often cannot survive here, and vice versa.

Consequently, the magazines I subscribe to most often are usually limited to one genus. The magazines put out by the American Rose Society and the American Hosta Society contain great information; I highly recommend them if roses and/or hostas are your thing.

General topic magazines, those that describe everything from impervious counter tops to plants you cannot live without, are the ones I avoid like the plague. The articles I especially shun are those tossing out lists as though they were spaghetti on our plates. Recently, I came across such an article that, although titled “The South’s Best Fragrant Plants for Your Garden,” was clearly—and unforgivably—written by a non-gardener. Following this writer’s advice could be perilous to one’s garden. Let me explain.

The first plant listed was “Climbing Roses.” Now, this is a topic I have some knowledge about. Roses, in this instance, are like people: Some have fragrance whereas others lack it. Just because a rose puts out long canes (and that’s what makes a rose a climbing rose) does not mean that an enticing aroma ensues. With apologies to William Shakespeare, this rose—the climber “Peggy Martin”—will not smell as sweet going by another name because it has no fragrance. Photo by Kit Flynn.

The second plant listed was “Wisteria.” While the writer instructs you that the native W. frutescens is less aggressive than W. sinensis or W. floribunda, caution is still needed. Alan Armitage, retired professor of horticulture at the University of Georgia, states in Vines and Climbers, “It is still an exuberant grower and within five years will have covered … half your house.” Wisteria, native or exotic, is not for the simple at heart. While it has fragrance, this doesn’t mean it’s desirable.

The third listed plant was “Sweet Autumn Clematis,” a.k.a. C. terniflora or C. paniculata. I’ve written about this plant before because it is gorgeous, aromatic and widely available. However, once you have it you will always have it as it self-seeds uncontrollably, easily escaping cultivation. Armitage calls it “a terrible pest, reseeding everywhere and popping up wherever the seeds are blown.” Suffice it to say that it belongs on no list of desirable plants. The Orienpet lily, which marries the Oriental and the Trumpet lilies, can thrive well in the Piedmont, boasting both beautiful blooms and desirable fragrances. Photo by Kit Flynn.

I rebelled at “Oriental Lilies.” The beautiful Oriental lilies dislike our hot, humid nights and will fizzle out in a couple of years. Yes, they have fragrance but, while faring better in the mountains, they are a poor investment in the Piedmont. Instead, turn to the Orienpets, the result of a marriage between the Oriental and the Trumpet lilies. The Orienpets, many having delightful fragrances, are survivors in our area. Mine happily return year after year.

“Daphne” is undeniably fragrant but Daphnes have a disconcerting habit of dying—if they die for the curators at Duke Gardens, chances are they will not last for you. Why not choose a different member of the Daphne genus that has both a delicious aroma and a desire to linger in the garden? Edgeworthia chrysantha fits the bill, whereas Daphne ultimately dooms most gardeners to disappointment.

The listed Winter honeysuckle is a ticklish subject because it technically is Lonicera fragrantissima, a Chinese honeysuckle. The article also includes L. japonica, about which Armitage states, “I think of this plant as I think of purple loosestrife, Lythrum salicaria. Both are quite beautiful, both have lots of reasons to incorporate them in the garden—and both are obnoxiously invasive.” With a little research the writers could have recommended L. sempervirens, a local honeysuckle that Armitage feels is the best of the lot.

I was horrified to see Elaeagnus on the list. Take a tour with Bobby Mottern, director of Horticulture at Duke Gardens, and Elaeagnus will forever repel you. The specific species mentioned, E. pungens, is on the Federal Noxious Weed List. As noted by the University of Florida, it “can tolerate shade, drought, and salt. Animal and birds disperse its seeds, widening its area of distribution.”

It is obvious that the writer was not a gardener and had no idea what they were writing. I suspect that the editor threw out the idea and then assigned it to an unsuspecting soul. I not only put this down to bad writing, I’m also assigning it to the terrible editing pile. For the new gardener this is a highly dangerous article because most of these plants are available—and shouldn’t be.

Some, like the Oriental Lily and Confederate Jasmine, are unsuitable choices for our area. The article described is truly an equivalent of a non-cook writing out a recipe or a non-knitter writing out knitting instructions (which does happen). It occurs way too often—and just because it’s in print doesn’t make it true.

There is a lot of good information out there but the conscientious gardener has to learn to pick and choose. Research before planting is the key. Introducing the plants listed in this particular article to any garden would lead to disaster, and who needs that?

Be the first to comment on "Be Careful What You Read"