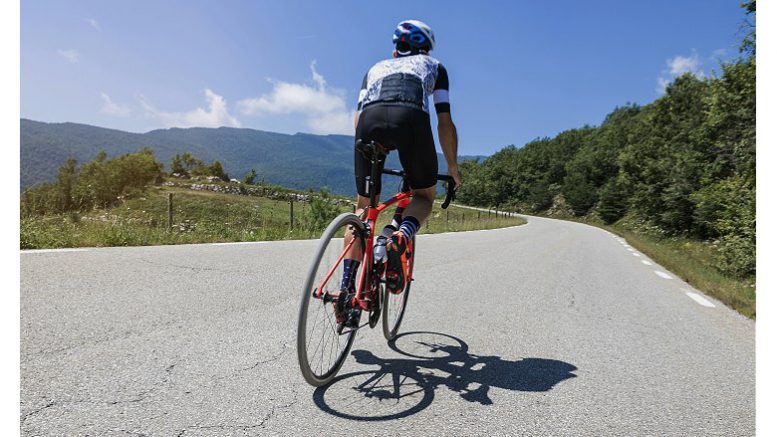 The story of how I became a cyclist begins with a shortage of bungee cords. It was February, 1983, and I’d loaded my Datsun pickup truck for the drive from Pullman, Washington, to Redlands, California. I was trying to secure the tarp I’d laid over my meager graduate-school belongings in the bed of the truck. Every which way I tried, I came up several cords short of what I needed.

The solution was to lay my rusty Sears ten-speed on top of the tarp and hook the bungees to the wheels, bars, and saddle rails. It was ugly but it worked; the tarp would stay put.

I’d ridden that bike only once since I’d moved to Pullman, a small town built on four big hills. When I first got to Pullman, home of Washington State University, I rented a dorm room for a week while I looked for an apartment. As a driver, I hadn’t paid sufficient mind to the hills.

One day I decided to go exploring on my bike. I coasted half a mile to Pullman’s pocket-size business district, pedaled up and down the town’s two main streets, then headed back to campus. I made it only halfway up the hill before I had to get off and walk. For the next three years, the bike sat outside in all kinds of weather. I’d planned to leave it behind, in hopes that whoever next rented my apartment would use it.

I was moving to Southern California to continue a relationship begun in graduate school. Southern California was no place I’d imagined living or wanted to live. My woodsy inclinations were better suited to the sparsely populated Northwest, especially the mountains and trout streams of northern Idaho and western Montana. But my heart said go.

When I got to Southern California, I set about launching my dissertation, a study of the psychological effects of problem-solving at work. It took six months to find five companies willing to let me in to collect data. Some of the data came from questionnaires workers filled out and mailed back to me, and I wanted a post office box as the return address.

The waiting time for a post office box in Redlands was six months, but I could get one right way in Bryn Mawr—at the time, little more than a crossroads community between Redlands and Loma Linda. It was about a six-mile drive each way. When the questionnaires started coming in, I went to the post office every day to pick them up.

On one trip I saw people riding bikes on the nearly empty roads that ran through the orange groves. The countryside was lovely, as was the weather. It occurred to me that it might be fun to retrieve my questionnaires by bike. The beater, now baking in the California sun, needed an overhaul and a carrier rack. I could do the work myself and be good to go. I wasn’t thinking about cycling for exercise, though I certainly needed it.

In Pullman, I had walked to and from campus every day—about five miles round trip. I also played tennis or racquetball twice a week. In Southern California, I walked mostly from my desk to the refrigerator, and got no other exercise. The three or four beers I drank every night to unwind had bellied me up, at five feet, ten inches tall, to nearly 210 pounds by late spring of 1984.

Riding through the orange groves afforded me the solitude I’d missed since moving to one of the most populous parts of the country. So I took to exploring new roads, riding a little farther each time. And farther still, sometimes, to see if I could do it. I was just toodling around on a clunky old bike. It wasn’t like having a thousand acres of Idaho wilderness to myself, but I enjoyed being outside, and I was catching the cycling bug.

I defended my dissertation in August of 1984. That summer I also taught introduction to sociology five nights a week—a schedule that nixed dinner and knocked off 15 pounds. All along, I kept riding. When I received a graduation gift of cash from my parents, I sold the beater, bought a nicer bike, and rode more. I soon adjusted my diet—less meat, more carbs—to support my higher level of exercise.

By the end of 1984, I weighed 50 pounds less than I had a year before and was in the best shape of my life. That fall I began doing what are now called Gran Fondos—mass public rides that might as well be called races. I discovered, to my surprise, that I could ride metric centuries (62 miles) and regular centuries (100 miles) comfortably and fast, at least for a newbie. I did my first double (200 miles) in the spring of 1985, and my first quad (400 miles) that fall.

The bug had become something of an obsession. How far and how fast could I go on a bike? I wanted to find out.

In the summer of 1986, a few months after I turned 30, I competed in the national 24-hour time trial. I was fit and well-trained, but my lack of experience cost me miles. Even so, I managed to finish second, covering 410 miles in 24 hours, solo and unpaced, on open roads. I would go on to do two 600-mile Race Across America (RAAM) qualifiers. For me, those events meant about 40 hours on the bike, straight through, no sleep.

I kept up long-distance riding for a while after moving to North Carolina to take a job at NC State. But being a full-time professor made it hard to find time to train for ultramarathon events, so in 1989 I switched to licensed amateur racing. I did that, and did fairly well, until 1994. I stopped competing mainly because other demands cut into my training, and I didn’t want to become mere pack filler. Yes, ego.

I can’t ride as fast or far as I used to. But I still get in about 120 miles a week at a brisk pace. And at 160 pounds I’m in better shape aerobically than I was in my mid-twenties at 185 pounds. I have to wonder if I’d have even made it to my current age, 66, if I’d stayed on the bikeless, beer-guzzling track I was on when I left Pullman.

The first time I rode 35 miles, early in the fall of 1984, I planned the trip for weeks. Today, 35 miles is routine; it’s about what I do every other day. That’s not something I could have imagined in my heavyweight spring of 1984. Sometimes life works out for the better when you don’t have the foresight to buy enough bungee cords and can’t get a post office box close to home.

Why I Am Not Going to Buy an E-Bike