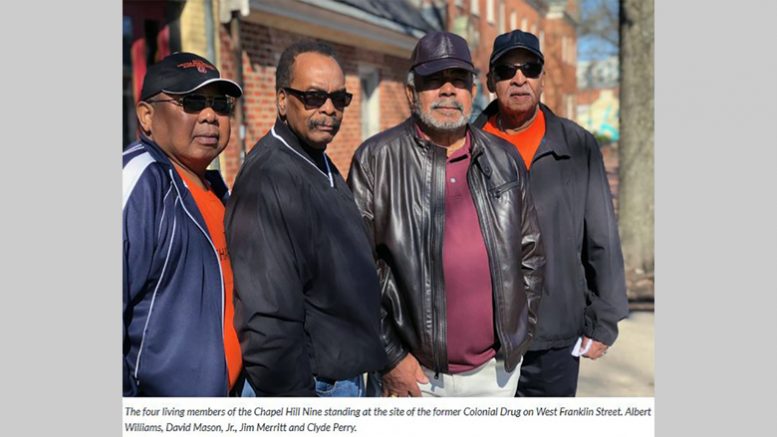 Recently Orange Slices turned to longtime columnist Neil Offen to reflect on Chapel Hill and the Black Lives Matter movement. Here’s what he had to say:

In Chapel Hill and Carrboro, increasingly, many express a belief that Black lives matter. You can see it in the protests and the proliferation of yard signs.

But to be honest, Black lives haven’t always mattered here. Like many southern towns, Chapel Hill and Carrboro have a long, sad history of racism and racial inequities. For too long, there have been too many times when the community hasn’t lived up to its ideals.

But that dismal local history also has been interrupted repeatedly by those committed to racial equality, by those who believed Black lives mattered — before there was an organized movement — and that they still do. That water reached Howard Lee. In 1969, he was elected mayor of Chapel Hill, the first African American to be elected mayor of any majority-white city in the south since Reconstruction. It was a remarkable accomplishment because this was a time, not unlike the present, when racial unrest roiled the country and many places — particularly in the south — fought against the tide of history.

Lee entered politics to fight against racism. When his family moved here, real estate agents, he recalled years later, wouldn’t show them homes in “white” neighborhoods, “much less sell one.” After finally purchasing a home, there were death threats and a cross burned in Lee’s front yard. Lee asked the local governing board to adopt an open housing ordinance, a request twice denied. So, he ran for mayor.

Record turnout brought him a surprise victory, and then he was re-elected twice more.

The legendary basketball coach at UNC won 879 games and two NCAA national championships, but two of his greatest triumphs aren’t engraved on a trophy. Dean Smith’s Greatest Victory Did Not Happen on the Court

In 1959, he walked into a segregated Chapel Hill restaurant, where the basketball team regularly ate, in the company of his white pastor and a black theology student to ensure they received service. The restaurant wouldn’t risk alienating the basketball team, as Smith knew, and served them.

That integrated church he attended was Binkley Memorial Baptist and Smith’s pastor was Robert Seymour. In a still rigidly segregated community, Binkley, under Seymour, had an open membership policy that sought to include not only all races, but all Christians, earning the church and its pastor reputations in the Southern Baptist Convention for being “uncooperative.” At the corner of Columbia and Rosemary streets, a marker commemorates the Journey of Reconciliation— dubbed “The “First Freedom Ride” — an interracial group who in 1947 tested the Supreme Court decision that ruled state Jim Crow laws on interstate travel were unconstitutional. For their troubles, they were attacked by a mob, arrested by Chapel Hill police and sentenced to a chain gang.

Seymour also founded the Fellowship for School Integration, which prodded the local school board, which had been dragging its feet, to move more quickly on desegregating local schools.

Seymour wasn’t the only pastor to make such a mark. J.R. Manley, who led First Baptist Church for more than 65 years, in the late 1950s became the first African American elected to the local school board. Previously, he had threatened to sue the board when it appeared reluctant to fund the building of a new gym at the Black Lincoln High School.

Once on the board, he worked with attorneys such as Thurgood Marshall, later to be the first Black on the Supreme Court, to push the system to become one of the first in the state to integrate.

An activist and historian, he helped organize the UNC Housekeepers Movement and co-founded the Orange County Rainbow Coalition of Conscience with fellow activist Fred Battle. He also directed a student-oriented social justice organization that exposed institutional racism and documented racial justice struggles at the university in order to make that history available to modern movement-building efforts. The organization publicly questioned the campus presence of the Silent Sam Confederate soldier statue and organized a campaign to abolish an annual university award named in honor of a 19th-century woman who advocated higher education for females, yet was also a white supremacist.

Like the others before him, Chapman’s efforts altered the landscape and our perception of the past and our understanding of the present.

These trailblazers opened a dialogue about a history of white supremacy, slavery and racism, although legacies of that history surely endure today. But their work helped build a foundation on which the Black Lives Matter movement pushes forward today. Neil Offen, who produced this article for the Chapel Hill/Orange Visitors Bureau, has been a newspaper reporter and columnist, a magazine editor, a blogger, radio news director and the author of more than a dozen books. He has lived in New York, Paris, Provence, Chapel Hill, and Carrboro. You can follow him on Twitter @NeilOffen1

More than a Car Wash

Be the first to comment on "Black Lives Matter"