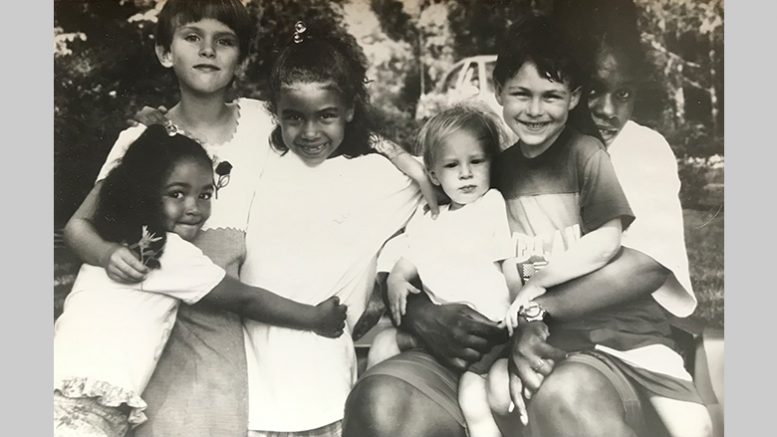 When it comes to children, Margaret Shelton-Foushee is the most gifted person I’ve ever met. Somehow, she evokes giggles from cries, turns whines into song and loves when children climb all over her.

As a town, we are lucky Margaret is in our midst. Over the past three decades, Margaret has loved and cared for more than a hundred of our children, first as a nanny and then as the owner and primary caregiver at Blossoms Day Care in the heart of Chapel Hill.

My husband and I were lucky to meet Margaret when our daughter Lilli was 2 years old, some 28 years ago. Lilli was on Margaret’s lap minutes after she arrived for the interview to be our nanny. Their bond was so strong from that minute on that Lilli still considers Margaret her second mom.

Margaret, the youngest of six children, grew up in eastern North Carolina. She says her mother adopted her to give her only sister a playmate. By the time she was 10 years old, her older brothers had their own children, and Margaret became the family’s primary baby sitter. “They called me ‘Little Momma’ ’cause I was bossy since I was a little kid,” she says.

Margaret learned how important those early years are for social skills and language development because she spent a lot of time with her aunts and grandparents. They had the time to “talk about everything” while her parents were too tired after long days working. She said “a child needs an adult to stop and talk them through tying her shoe or to find out what she’s crying about.” For more than 25 years, Margaret ran Blossoms Day Care on Pritchard Avenue in Chapel Hill. She and her husband, Rahsaan Foushee, still live upstairs in the small duplex, where they raised two adopted sons. Blossoms operated in the basement apartment that opens onto a big backyard where the children played.

Margaret always dreamed of running a bigger center. She somehow made time to earn her bachelor’s and then a master’s in childhood development from UNC-Greensboro. She served on boards committed to expanding access to high-quality childcare and earned the highest rating for her center.

Last year she finally had the chance to expand – the Church of Reconciliation on Elliott Road was looking for someone to re-create the child care center that used to be housed in the Sunday school building. Margaret reached out to her many alums and asked for their help to raise the funds necessary for doubling her capacity. The parents of many former students responded, still grateful for the attentive care our children received years earlier.

But what a time to open a new business! Her husband’s new barbershop in Ram’s Plaza opened last February, only to be shut down due to COVID two weeks later. He wasn’t able to open the shop again until early summer.

Margaret didn’t open the new Blossoms until September. She still hasn’t expanded the number of children due to concerns about contagion. She has been able to maintain her four staff with two Paycheck Protection Program small business loans, but will need to expand the number of children in the next couple of months to make ends meet.

She’s optimistic that her dream has come true. The new facility is much larger than the original Blossoms with a sunny room for each age: infants, toddlers and preschoolers, and a large outdoor playground accessible from every room. Margaret provides a nutritious breakfast and lunch from the adjoining kitchen. Margaret is committed to providing as diverse an experience for the children in her care as possible. She said not until she was a young adult did she realize that all people, whether from a working-class background like hers or “living in an 18-room house” had similar problems and concerns. She wants the children she helps raise to learn how to be with each other whatever their circumstances.

“I like people, and kids are people,” she says. “I get them at the beginning of being a great person. I want them not to be afraid of each other, to know that her father makes pizza at home just like your momma does. That we may have different cultures but underneath we’re all people with the possibility of being a great person. What could be better than that? I love it!”

On a recent visit to the new Blossoms I saw that, just like my daughter many years ago, the children lucky enough to be with “Ms. Margaret” have fallen in love with her, too. One little girl called out from the top of the climbing tower, “Oh, Ms. Margaret, the ball fell in the yellow flowers, and I can’t get it!” Margaret laughed her wonderful deep laugh and called back: “It’s hard to play with it now, isn’t it? I guess you’ll just have to have good memories about that ball.” The little girl laughed too and slid down the slide.

What could be better than that?

Jane D. Brown, who writes a monthly column for The Local Reporter, was a professor in the UNC Hussman School of Journalism and Media for 35 years. She and her family and pets live in Lake Forest.