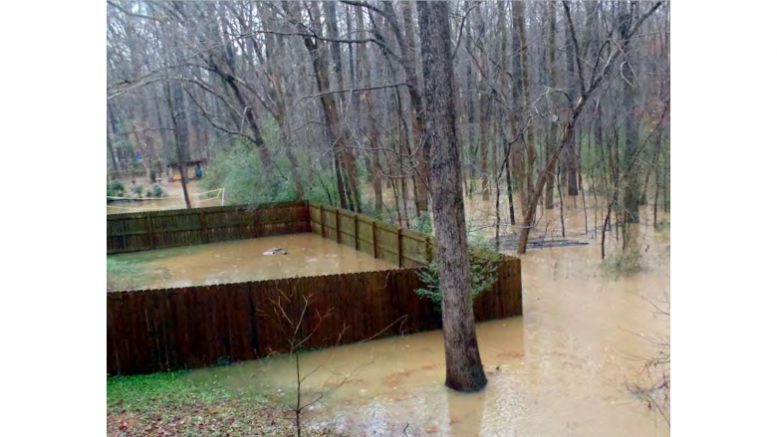 Chapel Hill’s Booker Creek Working Group met Monday, March 13 to discuss “tentative recommendations” for ongoing water management issues. After a series of presentations and discussions, the group agreed to move forward with a tentative recommendation for water management plans for the Booker Creek watershed. However, the group called for greater clarification of the specifics of the plans.

To start the meeting, the group watched a video from the NC Cooperative Extension which detailed the process of reinforcing the soil surrounding a stream. Using a backyard stream in Raleigh as an example, the video outlined the restrictions on what modifications can be made and how.

The method outlined in the video uses native plant stakes — in this case, elderberry bushes — and natural fiber netting staked to stream walls. Six months later, the plants had established roots and grown as much as 1 foot. According to the video, this project used around $250 in materials.

Projects like these, their costs, and who has access to them were the central focus of the next presentation and the rest of the meeting.

Overall, the project evaluated 49 neighborhoods within the Booker Creek watershed in terms of their potential for implementing green stormwater infrastructure (GSI). In the study, 26 neighborhoods were rated as good or very good for GSI implementation. Examples of GSI include rain gardens, cisterns, impervious surface conversions, and structural stormwater conveyances.

One of the primary takeaways, according to the presentation, was the need to take a more multifaceted, decentralized approach than the traditional “public right-of-way” approach to stormwater management.

The presentation stated “Data from the Lower Booker Creek report supports the need to partner with private residents and businesses to address water quality and quantity.”

The group developed three proposals for decentralized GSI implementation based on its work.

The first is a green infrastructure cost share program on private property. This program would reimburse up to 75% of the cost of installing one of 24 GSI practices that will infiltrate and hold stormwater on private lots. The group estimated the cost of this project at $70,000.

The second is an environmental justice green infrastructure program. This program would reimburse 100% of the cost of addressing household moisture issues and install one of 24 GSI practices for low-income residents. The estimated cost of this program is $180,000.

The third proposal is a youth education and jobs program in green infrastructure installation. This would create an E-STEM training and paid apprenticeship program for implementing GSI. The ultimate goal of the project is to get to equip students with the skills do community outreach and education for the program. This proposal is estimated to cost $50,000.

It was also noted that one full-time Town staff position would need to be created to manage the three projects.

Bench then turned the meeting over to Michael Dupree, water conservationist with Durham County government. Dupree and his department implemented similar programs in Durham recently and took questions after the presentation.

Dupree responded by explaining what his team had done in Durham.

“In Durham, when we administered the cost share program, we found several individuals who were just low-income households,” he said. “And even though there were serious water quality problems and erosion on their properties, they just couldn’t afford to implement any of the best management practices. So, Durham County came up with the impaired stream improvement program. We offer[ed] those households 100% coverage [of the costs of implementing] practices that ultimately are good for the community as a whole, because they were good water quality practices.”

Dupree mentioned that the program’s benefits extended beyond just water quality, despite that being the key focus. He said that residents were able to steer water away from their foundations and in doing so could address moisture-related issues such as mold and foundation decay.

Rivers and other group members raised concerns about what to do in areas with a high population of renters where landlords don’t want to pay for GSI. Dupree shared this concern but did not offer any solution to it.

“That can be a problem,” Dupree said. “If stream bank erosion is happening on rental units, it may be hard to get the landlord to understand the need to spend [the remaining] 25% of that cost. They may not want to pay the 25%, so it is a problem with subsidy programs.”

Much of the discussion around the Booker Creek watershed stormwater management program had focused on flooding and drainage issues. But Goldstein pointed out that Dupree’s presentation focused on “water quality” and asked him why that was.

Dupree thus implied that, even if the goal of a water management project is, for example, stormwater retention or erosion control, it must be framed and justified as a water quality project.

As further concerns were expressed about the willingness of landlords to take on the cost of subsidized GSI projects, Dupree explained that much of the work in conservation efforts is in convincing people to take them on.

“Conservation and implementation of conservation is a sales job,” he said. “Water quality business as defined by the state is a very technical and narrow lane that you walk when you do green infrastructure. You try to make sure most of the funds go to the people who need them the most.”

Sue Burke of the Town’s Public Works department had some other concerns. She noted that FEMA floodplain classification is limited to areas of at least one square mile, or half a square mile in some cases. That means that there are potentially many areas within Chapel Hill that are floodplains, even if they haven’t been identified by FEMA as such.

She also pointed out that to use stormwater funds on private property there would need to be a demonstrated public benefit. The benefits of these projects would need to be quantified for funds to be appropriated. In addition, she mentioned that a Mecklenburg County program that was referenced at an earlier meeting does not provide funds for rain gardens, roof drain disconnects, and cisterns on private property.

Following more discussion of these issues, the group moved to take an informal vote on adopting the proposals as a tentative recommendation. That “vote” came with plenty of caveats.

“We’re moving toward a tentative recommendation which would be subject to further discussion and further investigation,” said group member John Morris. “Then, when it comes time to really recommend this as a package to the town council, that’s when you have a really formal decision.”

The group voted to move forward with the tentative plan, based on the three proposals outlined in the slide deck. However, it did so with some concerns voiced by Dr. Antonia Sebastian and others in the group.

“[There is a] need to be clear and specific,” said Sebastian. “GSI looks different in urban areas than it does in other areas. We are going to have to be really clear in writing what is meant by green infrastructure.”

Who is Running for Office in the May 17 Primary Election?

‘A Little Lower than God’ and ‘Crowned with Glory and Honor’