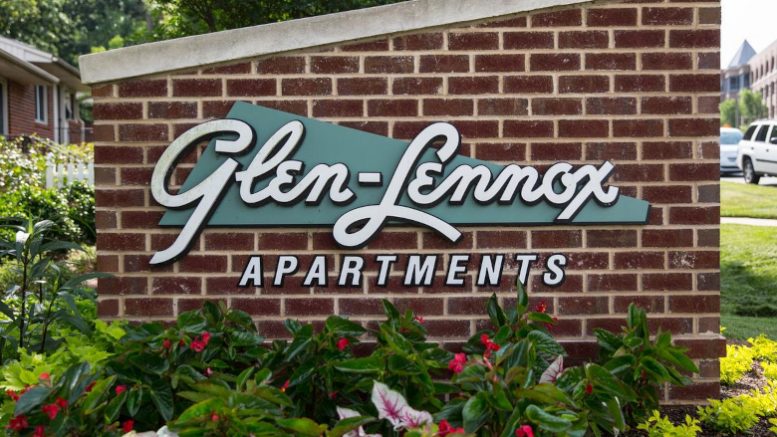 In 2008, the tree-covered and spacious Glen Lennox neighborhood was jolted out of its 1950s family atmosphere when the owner, Grubb Properties, put forth redevelopment plans for the entire 66-acre, 440-apartment property. The proposal was quite a shock: an “up to nine-story” hotel; numerous 4-5 story office buildings; parking garages larger than those that exist at UNC Hospitals; clear-cut land and a new street grid instead of the existing curvy roads; a grocery store, “bigger than Harris Teeter at University Mall”; scant attention to green space; and much more.

It was first presented at a neighborhood meeting that spring in the parish hall of the Church of the Holy Family. Nobody viewing it for the first time appeared happy; most were confused or shocked. One elderly resident from the apartments sighed and remarked to me that it seemed like a “done deal” and wondered when she would have to move out. But it was not a done deal. Neighborhood meetings, including both homeowners and apartment dwellers, began almost immediately, seeking to block — or at least substantially modify — the developer’s plans. The town had already established six stringent Neighborhood Conservation Districts across Chapel Hill. We wanted the seventh NCD to be Glen Lennox — apartments and adjacent streets included — and to keep things pretty much as they were. The developer soon withdrew its proposal and committed to working on a revised plan with the apartment residents, the neighbors and the town. All this happened right before the 2008 recession, and it may have been fortuitous for the developer that the neighborhood and town put on the brakes at that point. Glen Lennox has quite a heritage. Developed in the early 1950s to accommodate a vastly increasing UNC student body post-World War II, it has housed literally generations of students and their families. It is the oldest apartment complex in the town. The apartments and extensive grounds have been well maintained over the years, notably by Grubb Properties, which took over ownership in the early 1980s. The neighborhood beyond the apartments consists of more than 100 single-family homes, mostly built in the 1950s and ’60s, on Flemington and Hamilton Roads, and Oakwood and Rogerson Drives. The apartments and surrounding homes are desirable addresses in Chapel Hill.

The collaboration process for the redevelopment was formalized in 2010 with the establishment by the town of the Glen Lennox Area Neighborhood Conservation District Development Committee. I was on the NCD Committee, and we met monthly for the next two years following a structured process that included urban planning and transportation consultants as well as a large community visioning exercise. There was wide and diverse input, and many good ideas resulted that the developer could incorporate into its thinking while the recession played out. The final Glen Lennox NCD Plan was adopted by the Chapel Hill Town Council in May 2012 and has been recognized as a model process for creativity and collaboration.

It was another two years, however, before the developers and the town finalized a development agreement, with the developer finally breaking ground for Phase 1 (approximately 7 acres) in 2018. Phase 1 will be complete as of this month, nearly 13 years from the time of first going public.

From the beginning, there have been active opponents and skeptics of any change in the neighborhood. This is a characteristic, however, for which Chapel Hill is well known. The 2012 NCD Plan and all its good intentions seemed a long time ago at the point ground was finally broken in 2018. None of us knew how it would play out under the subsequent development agreement between the developer and the town. The neighbors mostly felt out of the loop as apartments were being demolished and trees cut down.

Happily, however, and to the surprise of some, the developer has acted in good faith. Phase 1 is wrapping up with values we can appreciate: attractive buildings with a focus on trees and landscaping; pedestrian and bicycle pathways connecting with existing town pathways; electric car stations; a greatly needed crosswalk on Fordham Boulevard; and even more demonstrating the commitment by Grubb Properties to go beyond the minimum needed to achieve the maximum ROI. In a nod to the heritage of the area, Grubb has kept the same logo and even recycled brick from some of the demolished apartments. Increasing urbanization around Chapel Hill is resulting in numerous large, multi-use developments. Remarkably, several others are already nearing completion nearby in the Fordham Boulevard and Blue Hill area. The Link/Linden Apartments and office building in Glen Lennox is one of the first to be completed; the developer now has an opportunity to further model community membership and responsibility. We hope other developers will observe and follow this leadership.

John Paul (jepaul211@gmail.com) has lived in the Glen Lennox neighborhood since 1981.

Note: There is extensive documentation of the Glen Lennox redevelopment process on the Town of Chapel Hill website.

2021 Will Bring Turnover in Local Government

Be the first to comment on "Buildings Emerge from Model Collaboration"