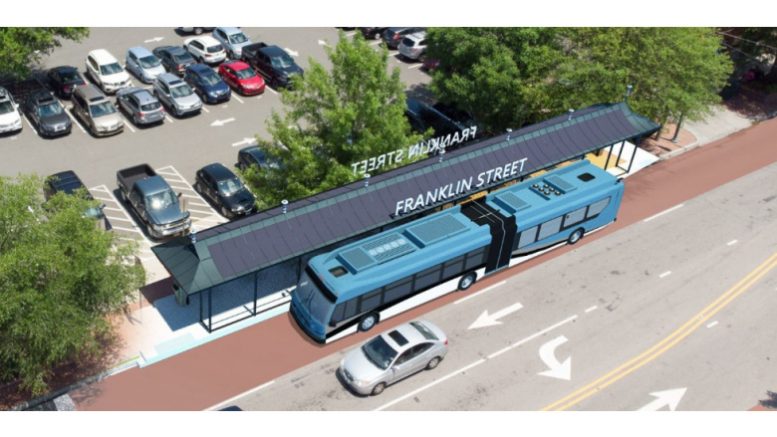 Staff expects to return to council during the Feb. 22 regular meeting to request adoption of a resolution supporting the TOD Strategy and Implementation Plan. A previously scheduled presentation for January has been postponed.

The next major step in BRT will be come August when the formal grant request is submitted to the Federal Transit Administration (FTA). Construction is expected to begin in 2026, with passenger service starting in 2028.

The initial BRT proposal was adopted by the Town Council in 2014. That was updated in 2019, and the final plan was adopted in 2020. In 2021, Chapel Hill Transit was awarded an FTA grant of about $600,000 to begin TOD planning along the BRT route. That comprises mixed, diverse, and accessible residential and commercial development, with walkable proximity and green spaces.

“The town council has been supportive of BRT,” said Dwyer. “The plan of development has already been adopted. The heavy lifting was done a few years ago when the locally preferred alternative was adopted.” The BRT will run a little more than eight miles, mostly along MLK Jr. Boulevard, from the park-and-ride facility at Eubanks Road to the one at Southern Village (see map 1). It will have a dedicated lane separate from other traffic, and stops will function more like train stations than bus stops. The stations will be connected to multi-use paths and the area greenway network. Headway on buses will be as frequent as seven minutes during peak hours.

The concept of BRT is to capture most of the efficiencies of dedicated right of way with lower capital costs than laying track. That allows the vehicles to avoid traffic congestion. There is also the potential flexibility of having the vehicles run on regular streets for parts of the route, such as in the center of town, then return to a discrete lane for longer distances.

BRT can be operated with conventional local buses, but are usually longer, articulated vehicles. The ones for Chapel Hill’s line will not be purchased until after construction is well under way. Dwyer indicated that the intention is for them to be battery electric.

“The BRT development has been one of our post popular projects,” she said. “People are excited about it, and there has not been much pushback in all of the 14 years since it was first conceived,” Dwyer said.

To be clear, that decade-and-a-half gestation was not because of any difficulty in the proposal, it was mostly a function of the multiple steps, permits, reviews and stages necessary for the federal funding of the initiative.

“We have to hit a lot of benchmarks before we show up at the door of the FTA asking for millions of dollars,” said Dwyer.

FTA underwriting of such projects is competitive. “In recent years there were some conflicts in funding with the proposed Durham-Orange Light Rail,” Dwyer lamented. In an ideal situation, she added, both projects would support and help advance each other as part of regional transit development. But as it was, the cancellation of the light rail opened some daylight for the BRT. As with the local buses, the Chapel Hill BRT will not collect a cash fare. “That will help speed boarding,” Dwyer explained, stressing that not collecting a cash fare is not the same as free. The preferred term is “pre-paid” because it is supported by local taxes in Chapel Hill and Carrboro, as well as by UNC through student fees. “I believe ours will be the only fare-free BRT in the country.”

Funding for construction and operations may also come from the sale of naming rights.

“While that is common in sports venues, it is also starting to become known in public transportation as well,” Dwyer said. “We are just exploring that. It could be the whole service, or individual stations.”

As an example, Dwyer cited the Cleveland Transit Authority. It has three rail lines identified by colors, and one by location; the bus lines are by number; and the new BRT is the HealthLine, sponsored by Cleveland Clinic and University Hospitals.

The route for the Chapel Hill BRT was selected primarily because that current conventional bus route is one of the busiest in the system. It also connects several commuter parking lots with the hospitals, so there is capacity around the proposed stations to handle growth in ridership. There is also room along the right of way for the separate lanes that are a major component of BRT.

Be the first to comment on "Bus Rapid Transit Set for MLK Jr. Blvd.; Plans Focus on Transit-Oriented Development"