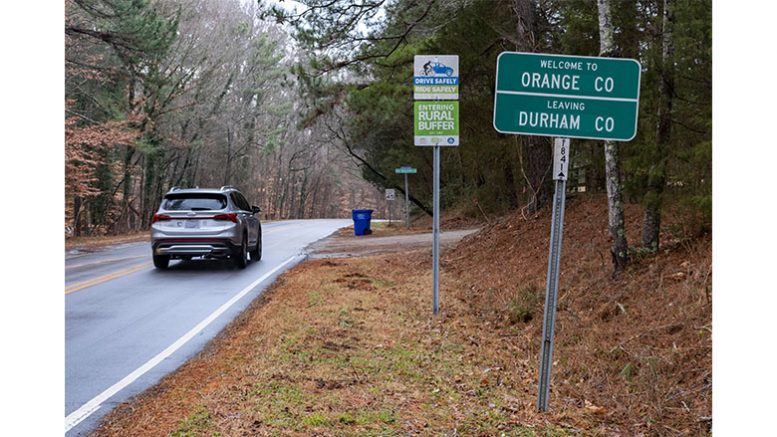 Ten cyclists were moving in a paceline down Orange Grove Road when a pickup truck blew past. The driver, angry at having to share the road, pulled back in front of the group and braked hard, causing one rider, Andy Prokopetz, to crash. Other riders got the vehicle’s plate number. The driver was later charged with assault and property damage. Prokopetz, who was 59 at the time, got a chipped bone, some grisly road rash, and a new bike out of the June 25th, 2014, incident.

Orange County commissioner Renee Price had this incident in mind when, in November 2014, she and fellow commissioner Barry Jacobs proposed creating a task force to study bicycle safety in Orange County. The task force that was eventually formed, operating as a subcommittee of the Orange Unified Transportation Board (OUTBoard), included cyclists, transportation planners, traffic engineers, educators, elected officials, businesspeople and law enforcement officers. The task force was asked to focus on education and communication.

Five years ago this month, the bicycle safety task force delivered its final report to OUTBoard. I only recently read the report, and I wondered what the upshot had been. Are rural Orange County roads safer today because of the task force’s work?

Heidi Perry, a longtime local cycling advocate, chaired the task force. Perry told me the group had indeed achieved some things. The task force produced a set of safety videos, some public service announcements for radio broadcast, a poster and a brochure. The task force also sponsored an educational bike rodeo in Cedar Grove and, more enduringly, got 15 Drive Safely/Ride Safely signs posted along rural roads around the county.

But the impact of the task force was diminished, Perry said, because turnover among county transportation staff left no one to champion the group’s recommendations. As a result, few people have watched the videos, heard the radio spots (only WHUP ran them), or seen the print materials. COVID also disrupted plans to hold more bike rodeos and other public events. And though the Orange County Board of Commissioners supported the task force’s efforts, the Board itself turned over — only two members from that time, Price and McKee, are members today. So, for various reasons, follow-through fell through the cracks.

Another member of the task force, Alyson West, who now works at the UNC Highway Safety Research Center, agreed with Perry about the lack of follow-through. Addressing road safety problems through a citizen-volunteer model, West said, isn’t sustainable, precisely because people come and go. “It takes a sustained effort between county staff, towns and the state,” West said.

Perry and West also agreed that prioritizing cycling safety on county roads is more than a local problem. “It’s a system problem,” Perry said. “It’s the way projects are scored. It’s the way money can and can’t be spent on road projects. It’s NCDOT restricting funding for bike and pedestrian projects because they say the money is earmarked for roads.” Or, as West put it, “NCDOT’s metric is automobile throughput.” Cars, in other words, are what matter; bicycles are an afterthought.

Renee Price, who now chairs the Board of Commissioners, is open to building the political will and organizational capacity to make more lasting changes. Price recognizes the sustainability problem and would like to solve it. “If cycling groups came to the Board and said there’s a need, based on experience and evidence,” Price told me, “I’d be happy to put that forward. But I need input from the community. Bring it to the Board and we’ll see if we can set up a permanent group. It makes sense to me to have a permanent group.”

So, are Orange County’s rural roads safer today than when the task force began its work? It’s hard to say. The task force recommended improving data collection about road incidents involving cyclists. But, according to Perry, this hasn’t happened. Price said there’s no hard evidence to cite, other than a lack of recent complaints.

Prokopetz still rides rural Orange County roads. I asked if he thought things had improved. He thought they had, but he attributed this to more cyclists riding with cameras — as he does, front and rear. On-bike cameras make it possible to identify and penalize unsafe drivers. “It’s now known that if you’re stupid enough to hurt a cyclist, you’ll probably get caught.” On the brighter side, he added, “Most drivers are respectful.”

If a smidgen of that respect is owed to the efforts of the task force, so much the better. But everyone acknowledges that there is more work to do. The urgency of this work — to make cycling safety a priority and ensure sustained attention to cycling issues — will only increase as Orange County grows and more people ride bikes for recreation and transportation. Perhaps now is the time to accept Price’s invitation and push the issue. Again.

1 Comment on "Can We Make Bicycle Safety a Priority in Orange County?"