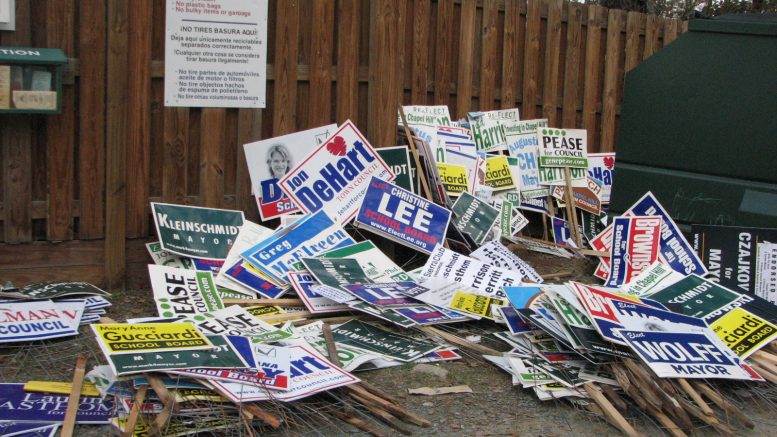 The proliferation of campaign signs along area roadways and throughout Chapel Hill-Carrboro neighborhoods has people asking when the signs will come down and what happens to them when the election is over.

In Chapel Hill and Carrboro, thanks to a collaborative effort between candidates, most signs will come down quickly. This effort, initiated by Will Raymond in the early 2000s with help later on from James Barrett, is one I have enjoyed leading for the past six years.

This helps clean up the community faster, is safer, enables candidates to store and re-use signs for future races and encourages recycling when possible.

Here’s how it works:

There are six designated routes, each covered by at least two assigned candidates.  Once signs are picked up, they are taken to a collection site at Cedar Falls Park or Carrboro Town Commons where they are sorted by candidate.

Early on in the campaign season, I invite each candidate to participate in the cleanup effort and ask which routes they prefer.  I try to match a school board candidate with a council/mayoral candidate for each route.  Then I place a sign for each candidate at the park where the collection teams can sort and leave the signs.  Each candidate is then responsible for taking care of their signs.

Over the years, I have found that this collaboration helps build community and, with the help of spreadsheets for the established routes, coordination is fairly simple.  We try to have it all done within 5 days so that the signs are out of the way!

In the days immediately following the election, others are welcome to drop signs from their yards off at the two designated locations as well.