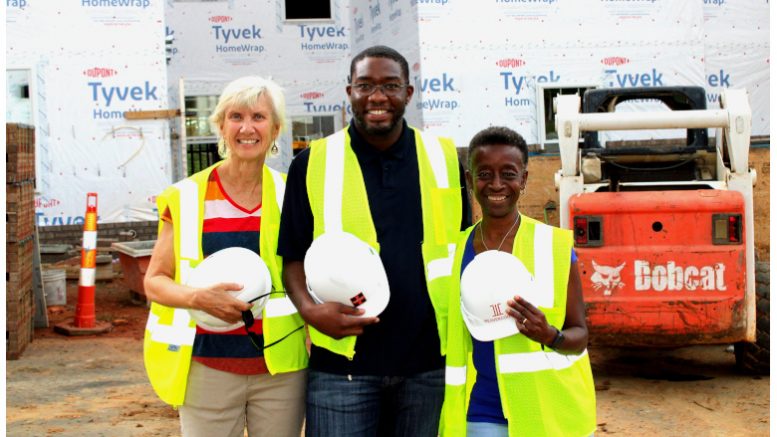 Carrboro’s Mayor Pro Tem Susan Romaine, left, Quinton Harper, and the chair of Carrboro Affordable Housing Committee and Carrboro Council Member Barbara Foushee stand on Carrboro’s side of an affordable housing development on Merritt Road. Perry Place is a joint venture with the Town of Chapel Hill, equally partnered with Carrboro, which straddles the border between the two towns. It will offer 48 apartments to residents making 60% or below average median income (AMI) in Orange County. The target for completion is December 2022. Photo by Michelle Cassell.

Editor’s Note: This is the first in a four-part series during the month of September on affordable housing in the town of Carrboro.

Imagine going to the grocery store and running into your favorite teacher or walking down the block and seeing the police officer who lives on your street. Or the nurse who took care of your loved one in the hospital. You might stop in and check up on your elderly neighbor and, on the way home, greet the server who poured you a beer at the town tavern.

For some, that is a distant memory and for many, it never was. But, if the Town of Carrboro finds a way, they will re-create communities with affordable housing goals related to racial equity and offer a variety of housing options to folks that work in the town, but can no longer afford to live there. This would include home purchase and rental options at affordable prices.

“The creation and preservation of affordable housing are among the top concerns for Carrboro residents,” Mayor Pro Tem Susan Romaine told The Local Reporter (TLR).

Affordable housing is defined by Carrboro’s Housing Goals and Strategies document as housing that is affordable to households earning 80% of the area median income (AMI) or less. Affordability is defined as spending no more than 30% of household income on housing costs, including utilities. For a family of four, that equates to $28,650 per year.

Looking for Land in All the Right Places

Siting affordable housing can be a challenge for many reasons, including environmental safety and proximity to services. The cost of the land itself can also be a barrier.

“That’s why Town-owned (or donated) land is such an important tool in the affordable housing toolbox. The Town can lower the cost of a project enough to make it affordable for a developer to build housing that meets the needs of lower-income community members while also advancing the Town’s goals around racial equity and climate mitigation,” said Romaine.

The Town of Carrboro issued a request for proposal (RFP) to engineering firms to select one for providing site assessment services for four Town-owned parcels identified for potential development of new affordable housing.

“This is part of a multistep process adopted by the town council last year to assess the feasibility and appropriateness of these properties for affordable housing development,” according to Mayor Damon Seils.

As a next step, a site analysis will shed light on how the development of the four parcels would impact stormwater, soil erosion, canopy, and biodiversity.

Romaine explained, “If the sites are developed, community engagement becomes front and center. The more voices brought to the table around the goals and design of the project, the better the outcome. Many of these conversations will be had at the neighborhood level. Community members can also weigh in during public hearings that will be held at Town Hall. We hope to make the whole process as open, accessible, and transparent as possible.”

“It is important to note that we are in the first steps of the process,” said Quinton Harper, chairman of Carrboro’s Affordable Housing Advisory Commission, in explanation of why no public hearing dates have been set yet.

“We want Carrboro to continue to be diverse, inclusive, and welcoming—housing is part of that picture. People tell me ‘I love Carrboro but I can’t afford to live there.’ … Our community members …  realize we need to help those 30%-of-the-AMI folks on a fixed income: our veterans, our seniors, those with mental illness and the list goes on,” said Foushee who ran both of her campaigns highlighting the need for affordable housing.

“A community that offers ways for its citizens to live and work in it affordably benefits by creating a vibrant, functional, and transparent community,” she said.

Foushee’s comments touch on a justification for affordable housing that is often lost in the discussion: affordable housing doesn’t just have humanitarian reasons to exist, but an economic benefit to towns and their governments as well.

In his post to Forbes.com, President and CEO Richard Burns of the NHP Foundation, made the business and economic case for communities to supply and benefit from affordable housing. Describing it as an “asset class,” Burns outlines all the businesses, professionals, residents and governments that stand to gain from the stable “real estate ecosystem” that affordable housing brings, from developers and builders to waitstaff, retailers and government coffers.

While many daycare workers, home health aides, bus drivers, and restaurant and retail employees may qualify for the 30% of area median income (AMI) affordable housing, others like teachers, nurses, police and firefighters usually don’t. The term “affordable housing” often  includes what is called “workforce housing,” which applies to many of these occupations, typically paying what translate to 50% to 80% range of AMI.

The Carrboro Connects 2022-2042 Comprehensive Plan expresses concern that the Land Use Ordinance and the developmental approval process make building smaller homes and multifamily projects difficult—the kinds of housing that would serve these populations. It raises the problem of a “missing middle”: fewer options for small-scale buildings close to public amenities and shopping areas.

“‘Missing middle’ is used to describe a population-level need, most commonly for teachers, nurses, firefighters, etc.—those that may not be able to afford market-rate housing, but [who] also may not qualify for housing subsidies. When housing professionals use the term, they usually reference a range of housing types, including duplexes, triplexes, accessory dwelling units [ADUs], and other types of neighborhood-scale development,” explained Rebecca Buzzard, director of Housing and Community Services in Carrboro.

To address such needs and others under the umbrella of affordable housing, the Town of Carrboro has dedicated a penny-and-a-half of property tax revenue to funding. The Affordable Housing Special Revenue Fund (AHSRF) targets increasing the supply and upkeep of affordable housing stock. One of its funding partners, Community Home Trust, provides assistance to homeowners and now works with rental properties.

If one or more of the four properties to be evaluated for affordable housing becomes a reality, the Town of Carrboro may well reach the magic number of 555 units in its timeframe. Then, those who were previously priced out of the town may well reach their dream of a community where they can greet everyone they meet with a “hello, neighbor.”

1 Comment on "Carrboro Closes in on Affordable Housing Goals"